Chelsea Dua entered Intro to Women’s Studies class the day after the election full of outrage and despair.

“Words cannot begin to express how frustrated I am that we have become so selfish and ignorant as a country,” said Chelsea Dua, an Intro to Women’s Studies student. “I cannot sit here and support a man who is about to strip women of their reproductive rights and ultimately control of their bodies. I cannot sit here and support an overtly racist candidate who will continue to ignore the cries of the silenced Asian, African American, Muslim, Latino, LGBTQ and other minority-based candidates.”

Women’s Studies classes were on the wired side regarding reactions to the election results.

On Wednesday, Nov. 8, 2016, America elected a new president: Donald Trump. News of Trump becoming president generated a variety of reactions from people across the country, especially from professors and students here at Marist College. END_OF_DOCUMENT_TOKEN_TO_BE_REPLACED

Marist had the honor of hosting a prominent sports broadcaster this past week. Presented by The Marist Center for Sports Communication, Linda Cohn, the first full-time female sports anchor, spoke at Marist College on Oct. 28 in the Fusco Recital Hall.

Cohn presented a discussion based on her knowledge of the sports communication field, her experiences working with ESPN and other outlets in the sports broadcasting department. END_OF_DOCUMENT_TOKEN_TO_BE_REPLACED

With Halloween just around the corner, you can transform your pumpkin carving experience in the Hudson Valley for a mere $20. Despite what you may be accustomed to, the pumpkins on display at The Great Jack O’Lantern Blaze are no ordinary jack o’lanterns.

The Great Jack O’ Lantern Blaze is a Halloween event that takes place at the Van-Cortlandt Manor in Sleepy Hollow Country. Various displays of carved pumpkins are arranged throughout the 18th century riverside landscape to create an aura of mischief and magic for visitors. END_OF_DOCUMENT_TOKEN_TO_BE_REPLACED

It is that time of year again when the Steel Plant is transformed into a showcase for contemporary art. The Faculty Exhibition opened to the public for viewing on Sept. 19th located in the Marist Art Gallery. The exhibition contains a variety of artwork presentations and runs daily from 12 p.m.-5 p.m. until Oct. 22nd. END_OF_DOCUMENT_TOKEN_TO_BE_REPLACED 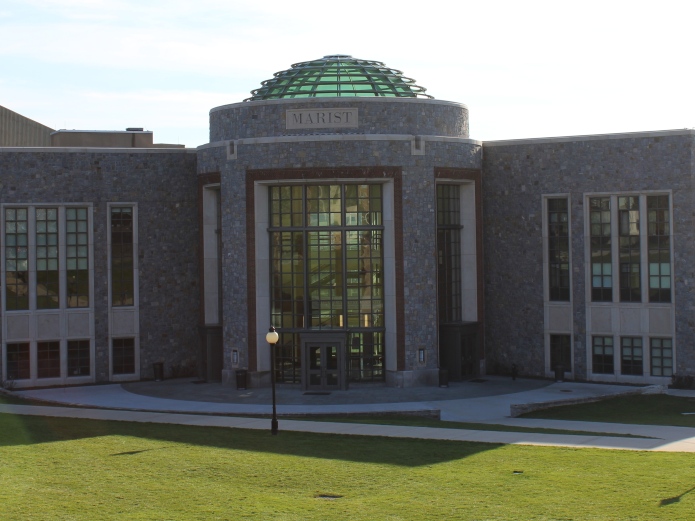 When the end of August or early September weather comes to mind, I automatically picture blistering heat waves. The students of Marist College know this feeling all too well, especially upon arriving back to campus with temperatures reaching over 90 degrees in the first week of classes.

Humidity is a customary weather trait in the city of Poughkeepsie Marist students are quite familiar with by now, but this past year the temperature is reaching new levels of insanity. END_OF_DOCUMENT_TOKEN_TO_BE_REPLACED