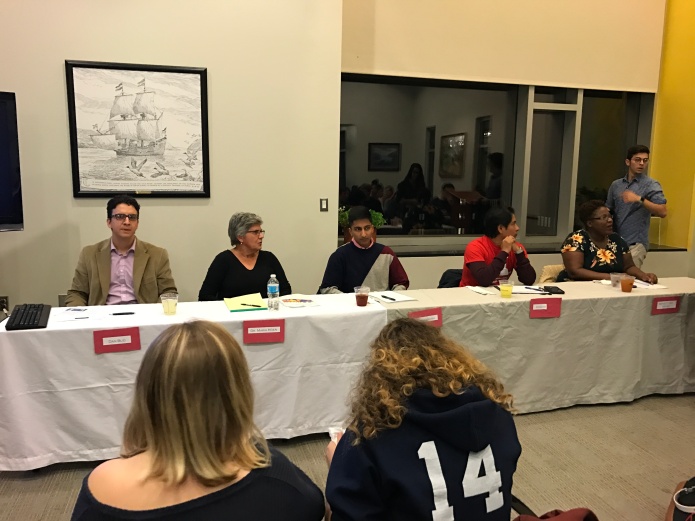 POUGHKEEPSIE, N.Y. – Undocumented immigration has become one of the most prevalent societal issues in recent years. In the Hudson Valley specifically, there is a growing movement both to have open discussion about the issue and to take action to address it.

On Wednesday, Nov. 8, Marist College held a forum on refugees and immigrants in the Hudson Valley. The event was run by the Marist Center for Civic Engagement and Leadership. The panel of speakers consisted of activists as well as members of various organizations meant to help undocumented immigrants in the Hudson Valley. Most panel members were immigrants themselves and shared some very enlightening information on their own experiences with the process. The panel was clearly very passionate and showed that there is a clear will within the Hudson Valley to address the issue of undocumented immigration. END_OF_DOCUMENT_TOKEN_TO_BE_REPLACED

POUGHKEEPSIE, N.Y. – One of Marist College’s signature annual campus events was once again a huge success.

On Wednesday, Nov. 8, Marist held its annual Hunger Walk in an effort to both raise awareness about the issue of hunger in the community, and raise money for several hunger relief organizations including Bread for the World and Dutchess Outreach. The event was organized primarily by Marist Campus Ministry and the Marist Honors Program. Those participating in the walk conglomerated for pictures on the Champagnat Green at approximately noon and the walk eventually commenced at about 12:30. END_OF_DOCUMENT_TOKEN_TO_BE_REPLACED

On Saturday, Oct. 7, the McDonalds located on 733 Main St. in Poughkeepsie joined several other locations in the company’s attempt to bring back a rare dipping sauce known as Szechuan sauce. The sauce was only made in 1998 to promote the Disney film Mulan, but was recently referenced in the hit Adult Swim television show Rick and Morty. The third and most recent season of Rick and Morty was the most-watched in Adult Swim history, and many of its fans called for McDonalds to bring back their old dipping sauce. As a result, McDonalds announced it would bring back the sauce for one day, but the promotion did not go as planned.

END_OF_DOCUMENT_TOKEN_TO_BE_REPLACED

POUGHKEEPSIE, N.Y. – One of Marist College’s own faculty members has pulled off a stunning local political upset.

On Tuesday, Sept. 12, Dr. Lynn Eckert defeated Peter Loughran in the Democratic primary election to represent the Ulser County Legislature’s 5th District. Eckert, who is an associate professor of political science at Marist, defeated the 23-year incumbent by accumulating nearly 75 percent of the vote.

END_OF_DOCUMENT_TOKEN_TO_BE_REPLACED

POUGHKEEPSIE, N.Y. — In searching for an explanation for the nearly simultaneous occurrence of Hurricanes Harvey and Irma, many people are focusing on the issue of climate change.

Having to withstand two storms of such great magnitude in less than a month is certainly an unprecedented and difficult task for people all over the country, including the Hudson Valley. In the wake of the storms, professors at Marist College weighed in on the role that climate change has played in the emergence of these storms and how to address the issue going forward. END_OF_DOCUMENT_TOKEN_TO_BE_REPLACED