With Christmas only 16 days away, many Marist students are looking forward to going ho 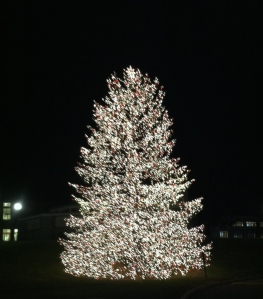 me for winter break. However, the end of the semester means that the dreaded finals week is vastly approaching. Students have final papers, presentations, and tests throughout these next two weeks, which can put a damper on the holiday spirit.

One giant reminder that symbolizes the holiday season at Marist is the gigantic Christmas tree outside of the chapel. The lights were finally turned on last Sunday night after the 7 p.m. mass. The tree shines brightly throughout the night and will illuminate for the rest of the semester.

END_OF_DOCUMENT_TOKEN_TO_BE_REPLACED

As the semester draws to a close, students are scrambling to get their work done in order to have a relaxing and peaceful Thanksgiving break. With their heads in the books, it might have been hard to keep an eye on what’s happening in the world. Lucky for you, the Red Fox Report has you covered on any major news you might have missed. This week included an immigration speech from President Obama, a massive snowstorm, a shooting at FSU, a massacre in Jerusalem, the troubles of Bill Cosby, and Katniss Everdeen’s return to the box office.

END_OF_DOCUMENT_TOKEN_TO_BE_REPLACED

“Wait, Marist has a radio station?”

That is the question that various Marist students said when asked about WMAR, Marist College’s student-run radio station.

Despite being recognized as an official club at Marist, WMAR still struggles to gain a significant following due to a lack of promotion and marketing at the school.

END_OF_DOCUMENT_TOKEN_TO_BE_REPLACED

In an effort to raise awareness for the upcoming basketball seasons, Marist Athletics hosted their version of Midnight Madness on Wednesday, Oct. 29. The inaugural event, Marist Madness, gave fans an opportunity to meet both the men’s and women’s basketballs teams as well as have an opportunity to take part in multiple contests for various prizes. The highlight of the night was when Marist senior Matthew Kark drained a half-court shot for $10,000.

Typically, Midnight Madness is a pep rally that happens at many schools throughout the nation. The idea is to generate excitement for the basketball programs in order to attract more fans to the games. A crowded and loud student section has the ability to motivate the home team as well as to frustrate the visiting the team.

END_OF_DOCUMENT_TOKEN_TO_BE_REPLACED

Imagine beginning college in a foreign country. To be more specific, imagine spending all of freshman year in Florence, Italy. After spending sophomore year in the United States you decide to study abroad again, but this time in a different country for a semester during junior year.

For a select group of freshman at Marist College, that scenario is very possible. Marist strongly supports the idea of studying abroad as it currently provides over 30 different programs all over the world. However, freshmen have an opportunity to explore Europe during their first year with the college by studying in Florence, Italy.

The adventure does not have to end after freshman year. With proper planning and a compatible major, students who spend their first two semesters in Florence can study abroad later on in their academic career.

That was the case for Marist students Brennan Weiss and Colin D’Amelio.

END_OF_DOCUMENT_TOKEN_TO_BE_REPLACED

Ford currently works as a correspondent for “60 Minutes Sports” and as a legal analyst for “CBS News.” Ford’s past experiences range from roles on “Good Morning America” to “World News Tonight.” Ford spoke to the audience about his upbringings, time as a lawyer, and transition to broadcast journalism.

END_OF_DOCUMENT_TOKEN_TO_BE_REPLACED

Fall is a great time to run outside. The leaves change colors, the humidity is down, and the weather is not too hot. However, runners will not have pristine, autumn conditions, as the forecast is about to change dramatically.

The official start of fall is not until September 23, but low temperatures throughout the northeast are starting to worry the runners of the Hudson Valley.