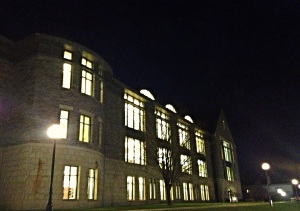 It’s 5:15 p.m. on Monday November 25. Casey Niper is done with classes and could be heading home early for Thanksgiving, but instead is currently making her way to the James A. Cannavino Library to work on her capping presentation.

“It has taken over my life,”said Niper, a senior majoring in International Business at Marist College, of her capping presentation.

Niper noted that after months of working on her final capping paper, lately she finds herself at the library for hours a day, at times from early afternoon until the library’s closing time, which is 2 a.m. on most days.

At Marist many students spend the years leading up to their final capping assignment stressing over the project, and when the time comes to finally buckle down and do it, the pressure seems to consume them. Considering the assignment is a final presentation of what students have learned throughout their time at Marist, many feel a need for absolute perfection.

As the semester winds down, many seniors will be in the same position as Niper, filling the library seats as they utilize every last second they have to perfect their capping presentations before the moment of truth comes and they finally have to show their work.

“As much stress as it has caused me, seeing the finished product will be worth it,”said Niper.

When word got out that renowned French designer Isabel Marant would be collaborating with H&M to create an affordable, yet chic collection, fashion lovers worldwide rejoiced. But when the line was released on November 14, eager customers found themselves disappointed, not with the distinctive designs, but with their inability to attain the items that they waited months for.

Like any designer collection, the much anticipated Isabel Marant for H&M line was bound to have a certain level of exclusivity, with price points being a bit higher than H&M’s usual low prices (generally ranging from $5-$50, and higher end pieces going up to $100), and a more limited quantity of the high demand pieces. However, the line wasn’t just exclusive, it was completely inaccessible for many.

When the line went live on H&M’s website, the site crashed, unable to handle the influx of enthusiastic and impatient fashionistas trying to get their hands on the designer garments. Many were put in a queue, and others made purchases only to find out later that the items they thought they were getting were actually sold out.

Being a long time fan of Marant’s couture line, I personally had my heart set on splurging on the H&M line’s Suede Fringe Boots, which retailed for $299. After trying to access the site and being put in the queue, I eventually was able to get on to the site, only to learn that the boots and practically every other item from the line was sold out. Since then, I’ve checked and checked again, trying to score my dream boots, with searches leading me to auction sites such as eBay selling the boots marked up to absurd prices as high as $645.

“I was disappointed when I was first put in the queue while trying to shop the collection…I was even more let down when I was able to put items in my cart, but was then told that they were sold out when I went to purchase them,” said Alex Sarlo of her similar issues regarding the Isabel Marant for H&M line.

A screenshot of the message many received when trying to access H&M’s website on November 14, courtesy of Racked.

Sarlo and I weren’t the only ones who had these issues. Racked.com has been keeping tabs on the issues that H&M customers have been experiencing, citing similar problems, as well as more recent complaints of people who were able to purchase items from Marant’s H&M line, but have since been informed that their order has been cancelled due to “quality defects or non-delivery from the manufacturer.”

Although H&M attempted to meet its customers needs by restocking the items online on November 15, the day after the collection’s initial release, the items were again soon depleted.

So, I find myself questioning what the happy medium is in creating a quality clothing line that is unique and exclusive, yet still affordable and attainable, keeping customers happy.

Kerri Boccard, a fashion-merchandising student at Marist College, compared Marant for H&M to another designer collaboration saying, “I think that certain lines, such as Vera Wang for Kohl’s, don’t meet the designer’s standards. Even though her items are highly stocked and easily accessible, they’re not great quality.”

Boccard said that she thinks other designers have had success in collaborating with stores such as Target and H&M, creating lines that are affordable, yet still cohesive with the designer’s look and up to par with the quality expected from such established fashion moguls.

I think that Boccard makes a good point in saying that it’s important for designers to maintain a consistent look and quality when designing lower end lines, which wasn’t an issue for Marant, who tied in looks from her recent runway collections and created exceptional garments for H&M. Where the Marant line disappointed was in its low inventory and H&M’s website issues. When creating a line designed to cater to high fashion fans on a budget, I think it’s important to ask: how exclusive is to exclusive?

Designers such as Isabel Marant already have runway collections that are completely out of reach for fashion lovers like myself. So, I think that when these designers make the decision to create an affordable line (which I applaud) they should forget about being the most elite and instead take it as a compliment that they’re so regarded and prepare for the demand by producing garments in high quantity and quality.

When H&M first broke news of their collaboration with Isabel Marant in June, they said, “Mixing urban attitude, boho elegance and rock ‘n’ roll spirit, she delivers a genuine French allure. For H&M, Isabel Marant will create a wardrobe of must-have pieces inspired by her signature style. Available from November 14, 2013, in around 250 stores worldwide and online, the collection features clothing and accessories for women and teenagers. Isabel will also, for the first time, create a collection for men.”

Immediately after that statement was released, the hype surrounding Isabel Marant for H&M was palpable. Sadly, after months of anticipation, many customers were left empty handed and broken hearted.

This isn’t a statement that was made by an anti-tobacco spokesperson, it is a fact reported by the Center for Disease Control and Prevention.

END_OF_DOCUMENT_TOKEN_TO_BE_REPLACED

Between cramming for midterms and taking some time off during every student’s favorite mid-semester “break”, many likely failed to open up The New York Times or turn on CNN, if so, here’s what you missed:

END_OF_DOCUMENT_TOKEN_TO_BE_REPLACED

How does Arien Rozelle, founder of the boutique music public relations firm FeelingAnxious PR, relate to her clientele? By knowing the struggle of creating something out of nothing.