Schmitt spoke highly of the field training exercise trip, also known as FDX. She explained that the best part is coming back and looking at everything she accomplished.

“Somethings I didn’t even know I was capable of doing. It’s also crazy to think that you really can survive off of just the basics.”

Schmitt comes from a family of impressive leadership roles. Her father, Paul Schmitt a West Point graduate, has had a long career in the military. He now works as a Defense Attaché, meaning he is responsible for military matters between the United States and the Ukraine. Having such a good experience with the military, Sasha’s father is the reason that she joined the ROTC program at Marist College.

“I actually didn’t really know that I wanted to do it in the beginning, but my dad convinced me because he said that I’ll learn a lot of other valuable life skills other than army tactics. He told me to try it out for a semester and if I didn’t like it I wouldn’t have to continue, but I really liked it so I stayed with the program” stated Schmitt.

As a junior with two years of training experience she was able to put her skills to use and fill some big leadership roles.

Throughout the weekend Schmitt was a Squad Leader, meaning she was in charge of three to five other ROTC members, making sure they knew and understood their mission. She also was a Platoon Sergeant, a job where she was responsible for ensuring discipline for squad leaders.

After participating in three FDX weekend trips, Schmitt felt ready to take on these roles.

“I personally think that every time I do another one I feel more and more prepared” said Schmitt. She explained that the first time she went she didn’t know what to expect. She’s learned important lessons such as packing her bag properly so it’s easy to access her necessities in the field, or even waterproofing all of her belongings.

Cadet Schmitt, on the right, posing with Cadet Brehm under a poncho tent.

All of Schmitt’s hard work in training will be put toward the summer which she will spend at Fort Knox in Kentucky, participating in a 37 day training camp that will test her on everything that she’s learned in ROTC.

Besides from the FDX trip that takes place every semester, Schmitt gains practice by attending physical training three days a week at 6:15 in the morning.

She is also required to take a Military Science course that helps her develop leadership abilities, and teaches her important knowledge that she will need once she is commissioned into the army.

Schmitt is already planning for the future, as she’s signed a contract into the army, requiring her to serve for four years. Once she graduates in May, she will be commissioned as a second lieutenant.

She will eventually pick which area she prefers to go into, and she’s hoping to get military intelligence, which entails collecting and analyzing information in order to guide and assist commanders.

Schmitt stated that she will decide later on whether or not she will stay in the army for longer than four years. However, after she serves, she would like to own her own business or work with international logistics.

For now, Cadet Schmitt is working hard in her classes and focusing on her ROTC program, which she really enjoys.

Schmitt commented on the close dynamic between the members of Marist ROTC. “I love it. We’re a big family. I always have their back and they always have mine.” 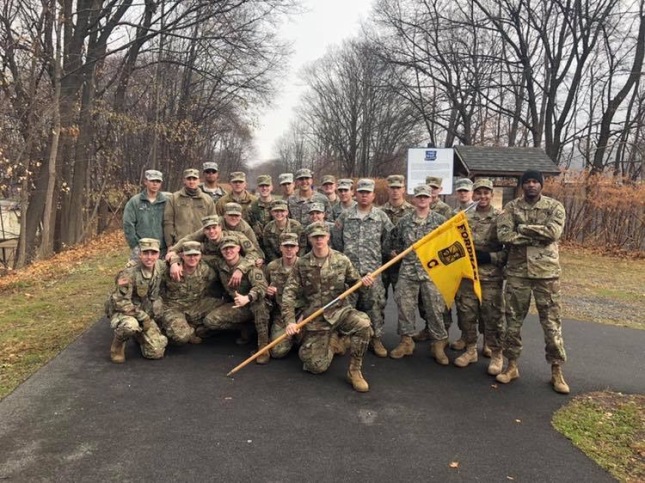