The Singer’s annual “Love in the Afternoon” benefit concert on March 9th and March 10th raised an impressive $4,000 for the Anderson Center for Autism.

“We were really happy with how much we were able to donate,” said Singers President, Nicki Barrett. 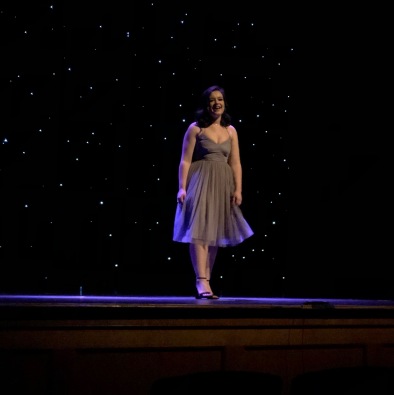 Singers President, Nicki Barrett singing her solo,”One and Only”

The donation will go towards the services at the Anderson Center that support the children and adults with autism who thrive through their programs.

“We have a many long years partnership with Marist College and this is yet another way we partner to improve the lives of all of our community members,” expressed the center’s Program Development Manager, Christine Wolcott.

This year’s concert took place at Marist College in the Nelly Goletti Theatre and included 30 performances, featuring the 180 members of the Marist Singers Program. The set list had a wide variety, as there were solos, duets, and small group performances. Among those small groups were The Enharmonics, Sirens, and Time Check, which are the three acapella groups at Marist. Each song performed was connected with the same theme: love.

The show opened with the entire Singers group singing “”Somebody to Love.”  Some of the other iconic love songs performed were, “I Wanna Love You,” “Signed, Sealed, Delivered,” and “I Love you Always Forever.”

Singers group performing the opening song, “Somebody to Love”

The annual concert has always placed an emphasis on this theme of love, because each year they select a different organization to raise money for.

“We decided on the Anderson Center this year because we had a lot of connections with the center already.” We knew that a few people in Singers have family members with autism, and two of our board members are studying Special Education.” said Barrett. “Plus, the organization is local so we can physically go there and perform and interact with people we’re helping.”

“What was cool was that two of our board members held an educational seminar for Autism so that everyone in Singer’s was more informed about the people and cause we were donating to,” said Tori Schubert, a junior singers member. Special Education majors, Dylan O’Brien and Max O’Handley felt it was important for everyone to be educated about Autism so that they could really put their whole heart into it.

During the show, Sarah William, the director of Choral Activities, came out to thank everyone that had been involved, and to show appreciation towards those who came. She also spoke passionately about the fact that every year, the “fabrics of each singers hearts weave together” to produce a show that will benefit an amazing cause.

Marist College’s Autism Speaks club also worked with Singers to support the event. On the days of the concert they had a table set up at the front of the house and were available to give out information to those interested.

Schubert stated, “I really like the “Love in the Afternoon” concert because we always support a really great cause, and it’s nice because it’s not about us. It’s about helping other people and touching other people’s hearts. It feels it really good to do that.”