Ibram X. Kendi took the stage of the Nelly Goletti Theater on March 13 to promote his new book, “How to be an Anti Racist.” 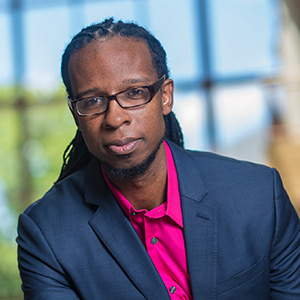 Kendi stood in the glow of the spotlights on the Nelly Goletti stage preaching one thing, “All racial ideas, all policies, and all people are either being racist or anti racists,” Kendi said.

Kendi wanted to exemplify what a non-racist is and what an anti-racist should be. While both of these titles seem to say the same thing, there is a difference that Kendi made abundantly clear. He lead with a simple question, “What is a non-racist?,” and began to concrete the point his book is written about.

The concept of even being a non-racist is inherently racist in itself, even to acknowledge the fact that there is another side is racist in itself, Kendi summarized. Kendi then brought a real example from his life, which is the initial chapter of his book.

When he realized he did not want to become a journalist with his degree he began to think of a professorial path. That required a GRE, so he enrolled in a Kaplan class at Florida State University under the impression this course would make him smarter, but a different result occurred.

That’s what Kendi believes is why the black community is consistently look at as a ‘inferior race’. Repeatedly Kendi reinforced the idea that minority students don’t achieve less than white students because they are genetically inferior, “It’s because of the nature,” Kendi said. He then said white people are intellectually superior because the nature of existence and never been persecuted for their skin color.

Kendi then introduced two varying ways of thing. The first being a segregationist ideal where, “These ideas are a function of God’s law,” Kendi said. The second being the assimilationists who believe the nature and environment should be changing and adapting.

In the end, Kendi took the talk political of how to get these racist ideals and policies to change so everyone can take on an anti-racist mindset. “As someone who is expressing a racist idea or supporting a racial policy through an action or even inaction. If you are doing nothing in the face of racist policies,” Kendi said, “then you’re not different than the person who put that policy in place.”

Racism is caused by the nature of the United States and in order to change that there will have to be change from an institutional level.

Having practically filled the Nelly Goletti with students and professors, his points came across clear, and his inherent knowledge was well received.

“The not-so-subtle genius of Kendi’s ideology stems from the idea that anyone is able to re-train and re-wire their mindsets and preconceived notions to be an anti-racist,” Liam Doerr ’20 said.

The idea of being an anti-racist wasn’t in the minds of students prior to the lecture, rather they just saw themselves as a non-racist; a big difference in the mind of Kendi. While the ideology of being a non-racist is good, people have the inherent humanistic ability to “re-wrire” their brains according to Doerr and take on a more driven anti-racist agenda, which promotes social and political change, not just stagnation.