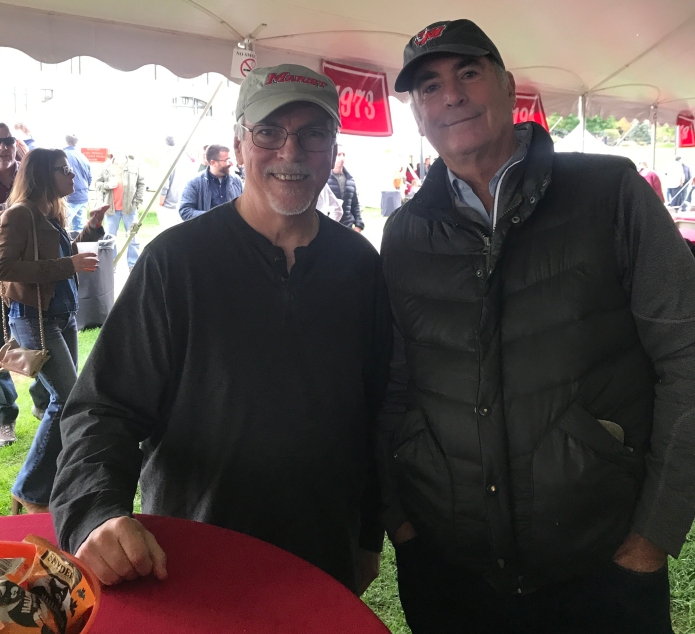 Poughkeepsie, New York- The Marist College Campus Green was filled with people of all ages smiling, laughing, and catching up on Saturday, October 20th during an Alumni Weekend event.

Past Red Foxes filled the campus exploring the new buildings, talking with old professors, and sharing their favorite college memories with current students.  Every year Marist hosts an Alumni Weekend/Homecoming that welcomes back all graduates of Marist. Events that are held include a football game, barbecue, food and beverage vendors, class pictures, and much more.

Current students were reminded about many changes; one being that Marist was once an all male school, as the last class of that era walked around with green baseball caps to show off which class they were.

Many alum were excited to network with current students and offer advice and tips for their future.  Kelsey Donohue ‘13 offered advice from her own personal experience. Donohue spent a semester in Washington D.C. at American University through the semester program Marist offers.  Although skeptical about the possible outcomes of her semester away, she was thankful she accepted the opportunity and was overwhelmed with joy due to her achievements. “Take every opportunity Marist has to offer.  Apply for things out of reach even if they seem like a stretch. You are capable of making that reach and succeeding,” said Donohue.

So what exactly has changed at Marist?  Tom Spratt ‘68 said, “Donnelly Hall was our cafeteria.  There was also a bar in the basement of Champagnat Hall which is where I worked.” Many Alum stopped in the admissions office and reminisced about the time it was a dorm.   Some even mentioned Donnelly Hall was once where mixers with Mount Saint Mary College students were held. The boys would dress up in their best clothes and head to the Brown Derby on Friday nights; much different from the current Friday night outings most Marist students take part in.

Some Alum are also parents to current and prospective Red Foxes.  “Marist is a family place. It’s more than a community, it’s a family” said Grace Ritter ‘18, looking at her dad John Ritter ‘84, catching up with old classmates.  It is not rare for families to be filled with past, present, and future Red Foxes. The Marist instagram page is constantly filled with pictures of baby Red Foxes.

Current students were eager to hear from their friends who had just graduated.  They wanted to know what the “real world” and graduate school was like. They were all relieved to hear that the graduates were enjoying their jobs, new cities and homes, and the friends they had made.  It also gave them a sense of reassurance which was highly needed after midterms week which was the week before. Many recent alum expressed their excitement for their new lives but also sorely missed their time on campus.

Many students also were interested in networking and speaking with older alum.  They had their resumes ready incase an internship opportunity appeared. William Clooman ‘68 shared his story of being the first President of the Alum Association Search Committee and worked on the board when former President Murray was hired.

Alum were excited to post their pictures on social media and share their annual Red Fox memories with the rest of the world.  Captions of posts included “the boys are back in town,” “Marist forever and ever,” and “always and forever a red fox.”

Current students strolled around campus smiling at how happy all the alum seemed to be.  “It comforts me knowing that even after we graduate, we will still be just as excited to be here on campus.  Marist is more than a college, it’s our home,” said Lindsay Barton ‘20.