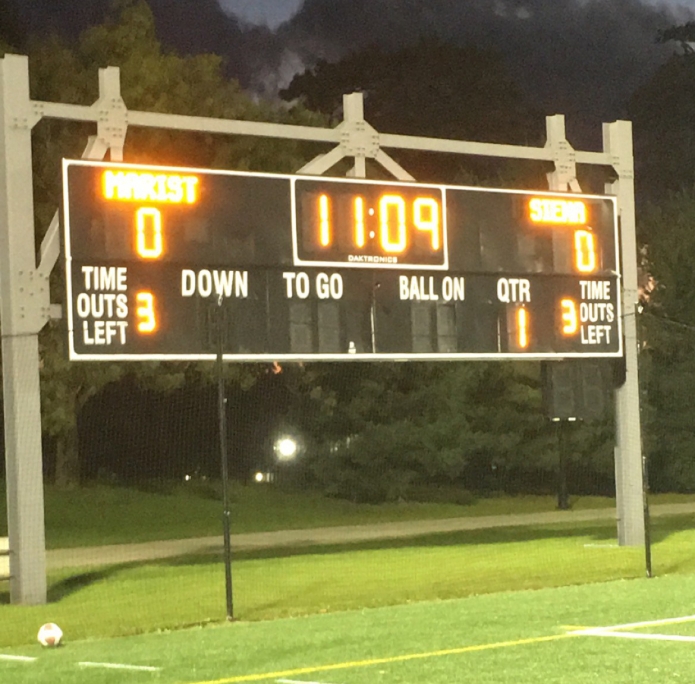 When the season started for the ladies of the Marist College Women’s Soccer team there was something in the air that triggered them. With only ten returning players who would be upperclassmen for the Red Foxes, they knew that they would have to prove themselves. After finishing fifth last season in the conference standings, the ladies knew that with a young bunch there would be little room for error. As the regular season play is winding down, the Red Foxes have not let their foot off the brake after defeating Siena last night at Tenney Stadium.

With the temperatures reaching about forty degrees last night, it wasn’t anything but a speed bump for the soccer team. Standing only in second place within the conference they know that the title is well in reach. As fans entered the gates with heavy coats on while carrying blankets, to them as well the weather would not play a factor to them. The chill in the air gave the fans in attendance just that much more of a reason to get to their feet at any exciting play. As I was able to watch the team warm up, there was something missing in action you could get the sense that things were a little more mellowed out but not to the point where the fire inside dimmed down. Using crutches to keep her up stood starting junior forward Keri Bradley, who is done playing for the remainder of the season due to a torn ACL. “This is just something you can’t avoid. If you go out there playing thinking you’re going to get hurt, then you end up getting hurt. I was just giving it my all and I was unfortunate” said Bradley. Leading the team in points with eleven on the season, the loss of Bradley was huge for the Red Foxes. Going down with a season-ending injury can take a toll on you not just physically but emotionally as well. “Everything happens for a reason and I have always been told that but also believed it as well. I wish for nothing but just to be back out there with my girls but I trust that they will take care of business. We got here and better together” stated Bradley. Injuries have plagued the Marist College athletics community recently as women’s soccer is unfortunately not the only team to succumb this outbreak.

The game was full of energy from start to finish, and luckily there were no injuries. But it wasn’t until the eighty-third minute, that a shot was able to reach the back of the net. Katey Samarro was able to get the Red Foxes on the board first and only. The team never looked back as just three minutes later in the eighty-fifth minute, was where Nicole Sasso headed in a corner kick to make the final score 2-0 in favor of Marist College.

As Keri Bradley looks on from the sideline for the remainder of the season, she has a voice in her ear that’s encouraging her to keep her head up and keep pushing. Midfield redshirt freshman Kristen Prevosto knows the exact pain, as she would say her big sister feels. “You could say soccer is all we know. It is what has gotten us all here playing together now” says Prevosto. Kristen came into Marist last year as a freshman who would be able to contribute right away. But a season-ending injury came her way as well, in fact, the same injury. A torn ACL over the summer while prepping for team camp, cost her her freshman season. “It’s just so crazy how God works. The same thing happened to me last year and all season Keri was in my ear just keeping me and positivity on the same page. Now that this has happened, it is only right to be there for her as she was for me when she barely even knew me” said Prevosto.

The game took off at a fast pace as shots from both teams were being fired on goal. Luckily, Marist’s goalkeeper junior Frankie Guzzo was able to deflect and defend all eleven shots that were sent her way pitching a shutout to opposing Siena. “Just coming out here and doing my job is what keeps us in games,” said Guzzo with a ton of emotion. “Keri is one of my best friends and ever since her going out a couple of games ago it has been different but we have to keep fighting. We can win our conference tourney and people don’t think so, so we’re just going to have to keep proving them all wrong” continued Guzzo.

The Red Foxes have two more regular season conference games left before tournament play begins. Tournament play is where the team will eye winning the championship to earn an invite to the NCAA Women’s Soccer playoffs.