As the sound of upbeat, instrumental music filled the room, muffled voices turned quiet and students shuffled silently inside for the Emerging Leaders Program’s (ELP) first live-stream broadcast of the semester, last Tuesday night. The broadcast was one of 19 events offered in ELP’s Fall 2018 Workshop Series aimed to provide students with various opportunities to define, discover, and develop their leadership skills.

The speaker of the hour was media personality and heart surgeon Mehmet Oz, professionally known as Dr. Oz. In his speech entitled, “Live Your Best Life from the Inside Out,” Oz spoke about the importance of mental and physical resiliency and advised students of stress management techniques to improve health and wellness. Oz also discussed his non-profit organization HealthCorps that he co-founded with his wife.

“The first telecast was not what I expected. I was pleasantly surprised to be moved by Dr. Oz on many occasions throughout his speech,” said junior Caitlyn Abrahamson. “He has generated some thoughts in my own mind about what I can do to make healthier lifestyle choices.”

Last Tuesday’s broadcast kicked off the first of three others scheduled and marked the fourth ELP event of the semester. The National Society of Leadership and Success (NSLS) organizes the broadcasts. In recent years, the NSLS has hosted a wide variety of esteemed leaders such as Robert Gates, former U.S. Secretary of Defense, Anderson Cooper, Emmy Award-winning television personality and journalist, and Barbara Corcoran, real estate entrepreneur and star of “Shark Tank.”

ELP first emerged at Marist in 2004 with 35 students participating in a weekend Leadership Retreat but changed to a non-credit leadership certificate program the following academic year. In 2006, after forming a partnership with the NSLS, the Marist Chapter was founded with 67 members. This semester, 326 students attended orientation as part of the induction process into the NSLS. “This is a huge increase from last fall,” said senior Brittany Hampton, the President of ELP’s Executive Board. “It is actually the largest number Marist has ever had [join in a single academic year].” 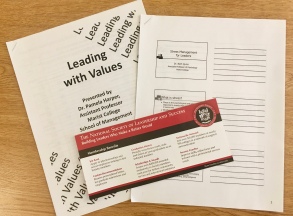 Included in the line-up of speakers this fall is Marist President Emeritus, Dr. Dennis J. Murray and key executives from Target Corporation, many of whom are Marist alumni and former ELP members, as well as other faculty, alumni, and administrative presenters.

Senior Lauren Vecchio, who attended three workshops so far, claimed that each provided valuable skills for different facets of life ranging from implementing “practical financial issues” and preparing for the workforce and professional life to understanding and formulating our individual narratives.

Students who complete five or more workshops throughout the academic year receive an Emerging Leaders Certificate, which can be earned on an annual basis. Those seeking to become an Inducted Member of the NSLS can learn more here. Last spring 2018, 217 students received ELP certificates and 112 were inducted into NSLS.

Students can register for the remaining workshops and telecasts within my.Marist.edu, subject to availability.

“One thing I’ve learned from being a general member of the ELP/NSLS is that you never know when or where you’ll encounter something that will change the way you think forever, so get out there and experience as much as you can!” said Vecchio.

Hampton shared a similar sentiment stating that although sometimes it may be easier or harder to connect with some speakers than others, “it is important, and interesting, to hear each speaker’s story so that you can decide which leadership styles you like best and form your own style. Hearing their stories also makes you aware of all the different types of leadership styles that are out there,” said Hampton.