Back to school for Marist students can bring a variety of many different feelings. For some, it may be the best time of the year when they can reconnect with their friends again. While for some it may be the toughest thing they will ever have done in their life up to this point. Moving halfway across the country, maybe even all the way from coast to coast, or for some students to a whole new country. Student-Athletes though, they have it a little different and some say tougher as well.

August eighth was the report date for football players. A long journey that the returning players had been anxious for. “This is what we have been waiting for. I know it sounds cliche and you hear it all over every time something that has been anticipated on is approaching. But all the work we put in over the winter and spring, it should definitely pay off” said Marist Running Back Areg Nazarian. For Areg the trek back to campus is not an easy one, hailing from Los Angeles, California. It is about a six-hour flight and then totaling about eight hours once he is in Red Fox territory. The trip is not all that bad being that he is used to it and has made friends along the east coast who are teammates of his. One thing that Areg says that has thrown him off was the construction to the McCann sports arena. “Teams are going to have to focus and adjust this whole school year. McCann is like every team’s home base. Everything we do is based on McCann or revolves around McCann in some way, shape or form. But with the intelligent student-athletes, we have here at Marist, it shouldn’t be that much of a strenuous task”. The reconstruction here at Marist on the McCann sports arena is enhancing all of the facilities that we the student-athletes use to further enhance our performance. The demolition of the weight room has cost regular students who had free access to any Marist College workout facility has thrown a wrench into plans. Regular students may not use the South Field Tent until 6PM. A Marist College student Casey Yamamoto has said: “Even though I didn’t really use the weight room that much and often last year myself, that is all you hear about is that how it is not fair that we “NARPs” only have from 6PM till midnight to workout. Not everyone can work their way around that, some people even made their schedule so that they can work out in the earlier half of the day and then this project rolled around.

For another Marist College student-athlete, linebacker Maliek Carr is taking this school year with a different approach as well. Being that it is his first time being off campus for housing. “When we moved out of Marian for camp it just made the ‘camp life’ that much harder. We still had to be everywhere the same time as everyone else, just coming from further away. I wouldn’t say it is complaining, I just wish that the people could have thought of a more efficient way and also safer in case someone wakes up early”. Being off campus with teammates makes it much easier for Maliek he says, because he doesn’t have to really rely on himself, but he feels all the ripping and running he has to go back and forth from building to building especially after football takes more of a toll on his day than it did the previous two years. 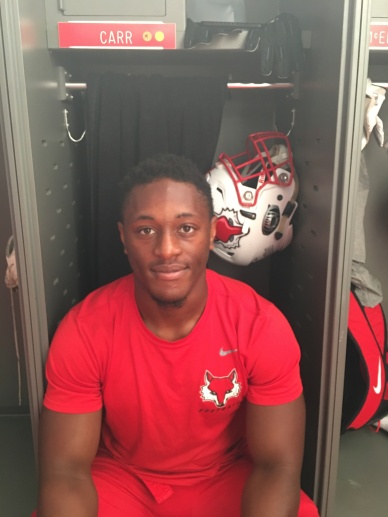