POUGHKEEPSIE, N.Y. — Almost a month since move-in day, the Fall 2018 semester has sufficiently sunk in and so have emotions about the school year ahead. Between moving into Marist for the first time as a freshman and preparing for the last year at college as a senior, both underclassmen and upperclassmen alike experience an array of emotions.

For freshmen, it is the adjustment process to a new school in an unfamiliar place with a different environment. For seniors, it is the thought of stepping out of the “Marist bubble” after getting accustomed to it for three years.

Student volunteers help out on move-in day to transport student belongings from campus parking lots to their on-campus housing.

Making the transition from high school to college can seem daunting for most first-year students. In order to help assist incoming students, various parts of the Marist community are involved from move-in day to student orientations and welcome week events. Marist sports teams as well as the Marist Band traditionally help the incoming freshmen members to the team/organization who move in early due to summer camp/training. “I would definitely say that the water polo team has helped me the most adjusting. The other girls on the team have been so helpful and supportive.  They made this process 100 times easier for me,” said incoming freshman Gabrielle Gervasi.

As for the graduating seniors at Marist, the start of the fall semester ushers in a range of feelings from happy, sad, and everything in between.  While some are planning to further their education by applying to grad school, others are seeking out employment opportunities as they prepare for the final lap before entering the working world.

“I want to go to grad school to get my PhD in toxicology, but if not, I’ll probably take a year off to get more research/lab experience,” said senior Beatrix Bradford.

“If I don’t have a job, I already have a possible internship for May,” said senior Niccole D’Arco. “I’m just going to play it by ear and try not to let it stress me out too much,” D’Arco added. 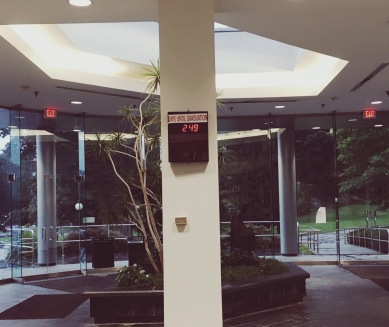 A countdown device on display in Donnelly Hall serves as a visual reminder for senior students as graduation day approaches. A similar device can be found in Dyson Center.

“I will be working full-time and I plan to live in Manhattan,” senior Victoria Fetzer said, beaming. Despite her enthusiasm, Fetzer still feels anxious thinking about life after Marist. “I am lucky to have a job for after graduation, but I’m a little nervous to go into the real world.”

When asked, students were not short of words to describe their feelings of starting the fall semester. Nervous. Scared. Excited. Anxious. Overwhelmed. These five words were reiterated by both freshmen and seniors alike.

“I was most afraid of the workload,” said freshman Avery Homer.

Though D’Arco spoke of a similar sentiment about the school year, her uncertainties were directed elsewhere. “I’m scared of not being prepared enough for post-grad life.  I feel like I need an extra year of student experience,” said D’Arco.

Like a majority of college students everywhere, Gervasi cited overcoming homesickness as a huge part of the adjustment process. “I was most worried about being so far away from my family. Texas to Marist is over a thousand miles away, so that kind of freaked me out in the beginning,” said Gervasi.

Marist seniors knew those feelings. After reflecting on their own experiences, they shared advice for their freshman self in hopes of calming current freshmen year college fears.

“I can’t believe how fast college went. I feel like I was just a freshman,” Fetzer said with a laugh. “I would say don’t worry too much and just enjoy every second because it goes by so fast,” added Fetzer.

As students continue on the course of the semester, one feeling seems to resonate with Marist freshmen and seniors alike: excitement for what is to come.