The Office of Safety and Security is currently testing Ripple, a personal security device, with a select number of students and Resident Assistants making emergency call boxes a thing of the past.

About the size of a Scrabble tile, Ripple is a small, discrete, wearable button with bluetooth connectivity and GPS. If clicked once, a Ripple dispatcher will call the user’s cell phone. This  could be used if a student wants to stay on the line with someone while they walk alone at night.

If Ripple is clicked three times it indicates an immediate emergency situation, and emergency vehicles will be sent to the user’s location.

Users can customize their Ripple settings to include a photo, medical information, and specify what kind of emergency vehicle they’d like dispatched in an emergency situation.

Brian Dolansky, Associate Director of Safety and Security, reports the students testing Ripple are “using it more than they ever used an emergency call box.”

Resident Assistant Owen Smith has been testing Ripple since August and thinks the new technology is “a great idea. Just having Ripple makes everyone feel a little safer, even if we don’t actively use it.”

The potential implementation of Ripple comes at a time when Marist students are assessing their personal safety. In the spring of 2018 senior Samantha Hesler conducted an anonymous sexual assault awareness survey in which she asked, “Is there any place on campus where you feel unsafe? Why?” Out of the out of the 108 survey responses Hesler received, six cite they feel unsafe because of a lack of emergency call boxes, frequently known as blue lights.

On campus there are 27 emergency call boxes total—19 on the east side and 8 on the west. Hesler believes, “If you’re going to have a blue light system, you need to have it across campus. You can’t half-ass the blue light system.”

Dolansky reasons the number imbalance, “Probably had to do with the evolution of the college…there are more on the residential side because that’s where most students are at night.”

According to data gathered by the Marist Office of Safety and Security, the emergency call boxes were activated 28 times between 2012 and 2017. Of those 28 calls, only three were students asking to be escorted home by security. Five were people requesting a jump start or other car  assistance.

“I’ve been doing this for 17 years and call boxes rarely get used,” says Dolansky, “If something isn’t being used, it’s hard to justify keeping it. But on the flip side, you can’t put a value on potentially saving someone’s life.” 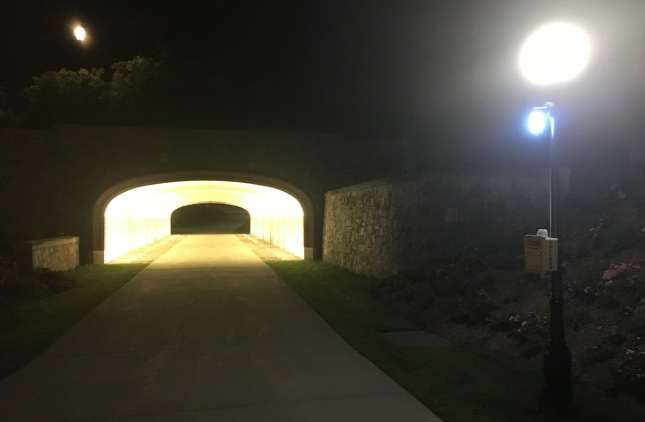 Deb DiCaprio, Vice President/Dean of Student Affairs, says Ripple is, “a much better way to go in terms of personal safety. We can only guess where blue lights should be. If someone gets in trouble in one spot and we put a blue light there, someone else will get in trouble in another spot. Students can use Ripple when and where they need it, they don’t need to look around for a blue light to get help.”

“There’s no one safety solution, no one technology, so we’re overlapping technologies by keeping the call boxes but testing Ripple,” says Dolansky, “The future of Marist security is not a static thing. We’re always looking for ways to improve and protect our students.”

The Office of Safety and Security is not currently planning to remove emergency call boxes.