This four day event held at the Hellenic Community Center attracted over 10,000 people. This festival is a celebration of the food, music, and the culture of the Hellenic people. The proceeds of the event went to the church’s programs. 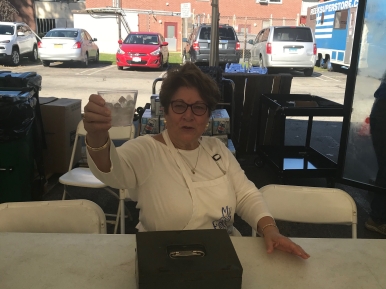 Andrea Miller has been a member of the Kimisis Greek Orthodox Church for over 45 years and has been a part of the festival since its inception. “The fact that the Greek community comes together and we work for weeks ahead of time baking and cooking, it’s apart of our heritage,” stated Miller. “The fact that this event has been going on for over 40 years proves that it serves its purpose.

People attending this event feel like they are being immersed into another culture when they attend this festival. Many locals attend every year because to this, it is not an event that can be missed.

Although there was no live music and dancing featured at this event attendees danced together to the music the DJ played. This showed the camaraderie as members of the community learned how to dance to Greek music.

“I come every year, twice a year, and I have been for over 15 years. This is not an event that I can miss,” said Yolanda Harris, a Poughkeepsie native. “I like some of the music, I just like being out and seeing different people, different cultures, different races, and I also like to go into the shops that they have here to see what is different from my heritage,” said Harris.

To add to the overall authenticity of the event, the festival this weekend focused on the food.

John Giogakis, is the president of the Parish Council at Kimisis Greek Orthodox Church, and has been working at this event for four years. “People come for our Greek food, everything here is handmade, made to order, and people love the food,” Giogakis stated.

This focus proved to be successful as attendees raved about the quality of the food.

“It has really good food. The atmosphere is extremely inviting, I have been to other Greek festivals but this is by far the best one,” said Frank Davis, Boston native who came to Poughkeepsie just to attend the festival.

Among the food options were, gyros, greek fries, souvlakis, loukoumades, and other traditional Greek food.

Pictured: Greek fries that were sold at the festival

“It was Greek, very Greek. The food is very similar to the types of foods that I eat at home,” said Cady Anderson, a high school student at Millbrook High School.

This unique event showcases the Greek culture to the local community. Every year it attracts more people and becomes more popular.

“Basically the purpose of this event is our Greek heritage, and giving it to Poughkeepsie. The fact that over 10,000 people have come in four days is truly amazing,” said Giogakis.