POUGHKEEPSIE, N.Y. — After a long weekend of procrastinating, accompanied by a mound of work steadily accumulating, Sunday strolls along and it’s crunch time. A case could be made that this is simply adding to the procrastination, but, according to ScienceDaily, taking a break from work actually increases overall productivity. Though it’s a fairly unknown club on Marist College’s campus, the Red Ink Club holds a prominent place in the lives of students who attend.

Each month, Red Ink has its long-awaited meeting, a short space of time where students can leave their work, take a break from their usual “Netflix breaks” and do something more stimulating.

“Red Ink is an arts and craft club here on campus,” said Debbie Boerke, junior and webmaster of the club. “We always meet on Sundays because it’s a great stress-reliever. It’s where you can come with all your friends and just make crafts.”

Studies have shown that taking breaks from studying not only helps people focus more, but also heightens creativity, according to Inc.com. When a stimulus remains constant over time, the brain eventually stops detecting that stimulus, which means that attention and overall functioning will be lost on that task.

Alex Ostroumoff, a junior at Marist, attends the meeting on November 5

“One time, I had a six-page paper due on Monday morning at 8 a.m. and I was working on it all day, but I remembered that I had Red Ink club, meaning that I could finally take a break,” said Alex Ostroumoff, a junior at Marist College.

According to their mission statement, the general purpose of Red Ink is to, “enrich the students of Marist College with art concepts and ideas, while encouraging them to explore and nurture their own creativity through crafts.” In addition, the club puts an emphasis on the importance of art in our lives, especially for students who aren’t able to take an art class while at Marist.

“I like it because, as a Computer Science major, I don’t get a lot of time to be creative; it’s more just logical things,” junior and vice-president of the club, Hannah Riedman said. “So it’s my creative outlet.”

At its most recent meeting on November 5, the designated craft was “memory jars,” which mostly consisted of decorating mason jars with various things, such as tissue paper, ribbon, string, mod podge and more. It seems like a minimal task, but many club-goers stayed for an hour to perfect their creations, with useful and unique finished products to show. 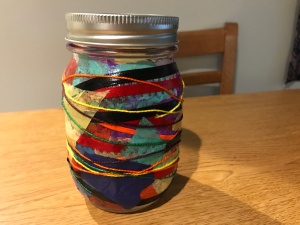 A finished product from the meeting on November 5

Red Ink is much more than just a time to relax from studying. In the past, other meetings have included tie-dying, painting pumpkins, dream catchers, wind chimes, as well as community service-themed crafts and other opportunities. Last year, the club donated money to the animal rescue group, Stray Help. For its December meeting, the club will be making holiday cards to send to children’s hospitals or to soldiers overseas.

According to the co-president of the club, Lynn Terry, it has “been about the same as it is right now” with regard to its number of members, which is about 30 or so people per meeting. Despite its numbers, Red Ink’s cult following will keep the club going for years to come, as Terry makes her departure as president this Spring.