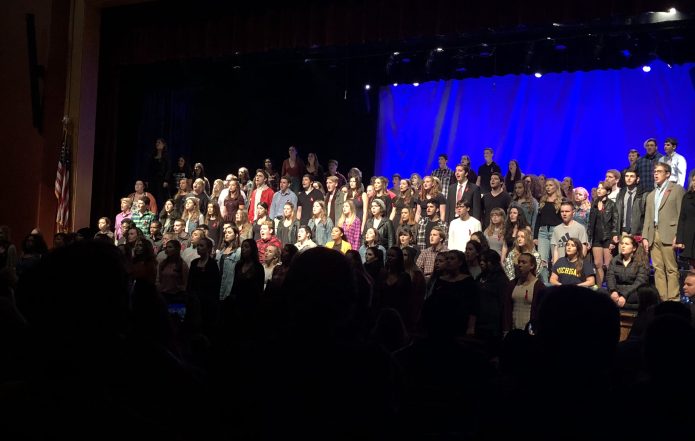 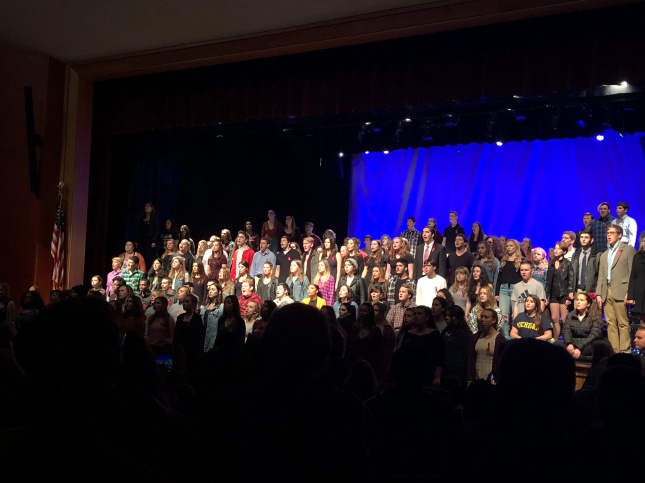 The Marist Singers gather and sing a medley from Rent for the finale.

POUGHKEEPSIE, N.Y. — On November 4 and 5, Marist Singers held their 15th Annual “Night on Broadway” benefit concert for Broadway Cares/Equity Fights AIDS (BCEFA). As usual, this highly anticipated event was a success: tickets were sold out, over $6,000 in donations were made and performers received a standing ovation.

Prior to the show, Marcella Micillo, the Marketing Intern for the Marist Music Department, explained that there is a lot of preparation that goes into the making of this event. Micillo alone is the director of the Lovely Sirens, a female a cappella group on campus, production manager of “Night on Broadway” as well as a performer in the show. She was also in charge of the publicity, poster designs and the raffle for the event.

“Preparation starts in the middle of September when auditions take place,” started Micillo. “The stage manager and assistant stage manager are selected with enough time for them to attend the two day audition process. Singers will begin rehearsing the larger group numbers during rehearsals over a month before the concert begins. Prep work happens up until tech week of the show when the production crew, the Singers e-board, and even Sarah Williams, the assistant director of the Music Program, are in the theater until midnight every night!” Micillo said.

Those sleepless nights and months of preparation resulted in an unforgettable series of shows featuring medleys from Hamilton and Rent and other selections from Dear Evan Hansen, Footloose, Dreamgirls, The Little Mermaid and The Music Man. The Marist Singers and the male and female a capella groups, Time Check and The Sirens, performed solos, duets and exciting group numbers showcasing their many talents.

Micillo remembers coming across the first ever show program in the archives that displayed a simple pamphlet decorated with clip art. “Night on Broadway” has evolved immensely since then, as seen in its program and production value – growing from a single show to three shows which run over the course of a weekend – and its efforts to host a raffle and bake sale to support a good cause. The most drastic change stems from the fact that “Night on Broadway” has become a more student-run event. This allows students to take the reins of the event to pursue their passion and give back to the performing arts community.

“Along with the rest of the Singers Board we selected students within the program to run and plan the show,” said Marist Singers president, Michael Yelovich. “We chose a student director, stage manager and assistant stage manager. Those people along with some of the music office employees are the ones who made the show happen.”

Thomas Vestuto, the public relations chair for Marist Singers, reflects back on how he became involved with the show: “Fellow board member, Dylan O’Brien, sat next to me in class and told me to come out to the benefit concert he had been working hard on. Being a high school musical theatre geek, I said ‘Sure, why not.’ I knew I wanted to join Singers after seeing the show, and later ran for a board position. “Night on Broadway” has helped me make some of the best decisions of my life.”

The Singers raffled prizes that were donated by community businesses, local families, and New York organizations. Vestuto contacted over 125 companies in an attempt to solicit donations that could be used for the raffle prizes.

Proceeds from the ticket sales and bake sales, as well as a portion of funds donated through the raffle, will benefit Broadway Cares/Equity Fights AIDS, a nonprofit AIDS fundraising and grant-making organization. With the help of its resources and the American theater community, they have raised over $195 million.

“Broadway Cares/Equity Fights AIDS helps individuals living with HIV/AIDS afford medication, get extra financial assistance and even receive prepared meals,” explains Micillo. “HIV/AIDS pervaded the LGBTQ+ community as well as the performing arts community and we feel as performers that this is an important cause to give back to.”

The show closed with the Rent medley, which reflects the young artists living in the shadows of HIV/AIDS in New York City. Additionally, BCEFA provides emergency grants to individuals in crisis like hurricane survivors in Texas, Florida and Puerto Rico.

“I think this year’s performances were really good,” said Marist junior, Jenna Ficula. “Year to year I’m excited to see different Marist students showcase their talent. I think last year was hard to outdo because of the stage production of Little Shop of Horrors, but this year the group medleys were recognizable and relevant to the cause.”

“Night on Broadway is an opportunity for everyone in Singers to be a part of something that is much bigger than them,” said Yelovich. “We sing to give back to our community and to touch the people in the audience. We hope our music can have a positive impact on the lives of our audience, and hope that the money we raise can impact the world.”

“Night on Broadway” has a way of uniting the community, and the message of this year’s concert aims to show everyone that no matter the hardships you face in life, you are not alone.

Sarah Williams, director of choral activities, has a mantra that strongly resonates with the Marist Singers:

“People come to our performances needing to hear something, and when we perform these pieces, we need to make sure that they hear just that.”