POUGHKEEPSIE, N.Y. — The 36th president of the United States, Lyndon B. Johnson, was quoted in a 1963 speech at the University of Michigan as saying, “Poverty must not be a bar to learning, and learning should offer an escape from poverty.” Those words certainly held true for Governor Andrew Cuomo (D-NY). Cuomo has now put into place a play to make Johnson’s quote a reality in the State and City University of New York systems.

The college search process is the most multifaceted and complex set of decisions a prospective student will make. Even the most seemingly insignificant things, like the dining hall and minor options can be major contributors towards deciding where someone will go to school. However, one factor that constantly rears its head is the tuition. Often times, tuition can be a bar to certain students enrolling at colleges because they are priced out. Under the Excelsior Scholarship, those situations could be all but eradicated in New York State.

The Excelsior Scholarship would grant every student who meets a strict set of guidelines free tuition to all two and four-year SUNY and CUNY schools. To be eligible for this scholarship, a student must be a resident of New York State and come from a household with a combined income of less than $100,000 per year, though this number will increase to $125,000 over the next three years. In addition, a student must take 30 credits in a calendar year and pledge to live and work in New York State for a length of time equal to that of their participation in the program.

The idea of free college has been a deeply polarizing and binary debate point in recent years, as several prominent presidential candidates even made free tuition at public schools a seminal point of their campaign. However, the idea that public colleges and universities should be free doesn’t seem as revolutionary as it did in past years. A poll from the Morning Consultant showed that 63 percent of people in the United States supported the notion of free public higher education, with only 29 percent strongly against it. Republican voters, who are more inclined to be against the idea, are split down the middle, with 47 percent in favor of free college and 45 percent against it.

Though Marist, a private school that will cost $39,380 in base tuition for the 2018-19 school year, isn’t a school that can reap the benefits of the Excelsior program, the scholarship is still making waves with New York residents on campus. Stephen Gerbasi, a junior from Elmont, N.Y., would have qualified for the Excelsior Scholarship if it was in practice during his college hunt. “It’s nice that this is in place now, but I’m a little bit frustrated,” Gerbasi said. “I was looking at SUNY New Paltz and SUNY Binghamton when I applied to Marist. If I knew I could go there free, I probably wouldn’t be here.”

Gerbasi also expressed his doubts about the long-term validity of the program. “Someone is going to find a loophole sooner or later,” Gerbasi said. “I think free college is a nice idea, but I think it’s almost impossible to put into practice and make everyone happy.” Gerbasi was noticeably jealous of some people in his hometown being afforded more tuition relief than what he got. “I’m a little bitter,” Gerbasi said. “I see these kids going to school for basically nothing, and I’m over here taking out these big loans.”

The Excelsior Scholarship has immediately provided some New York students with a cost-free pathway towards a bachelor’s or associate’s degree. Dutchess Community College allows its students to be recipients of the Excelsior Scholarship and Ian Scheer has already taken full advantage. Scheer, who is in his second year and is studying criminal justice, recalls the financial hardships that prevented him from attending community college previously. 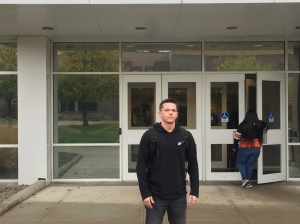 “I can remember just busting my butt working over the summer to try and get the money to go away,” Scheer said. “This scholarship has literally been a godsend.” Scheer was quick to point out that he could have still attended college without this scholarship, but it has removed a significant financial burden. “The biggest thing is just being able to go to school and not have to worry about any insane amounts of debt coming up,” Scheer said. “I can just go, study, and enjoy college without worrying about how the money side of things looks.”

Scheer was apprehensive when asked about how he believes this current free tuition program will hold up in the future, as he was when prompted about potential programs similar the Excelsior Scholarship appearing in other states. Still, he hopes that lawmakers and elected officials can look at a school and a student body like Dutchess Community College and see that free public college could and would work out for the better.

“I’m just one of a lot of people here who have the same sort of story to tell,” Scheer said. “I don’t know if anything else is going to do anything like this, but if they do, I hope that they see that it can work because it’s working here. I’m extremely grateful just to be able to attend a school like this.”

54 years after then-President Johnson made known his belief that college should offer interested students a vehicle to escape their current financial situation through education, New York State might finally be on the precipice of realizing his thoughts. The Excelsior Scholarship might just be the tip of the iceberg; the first domino to fall in a chain of events that could soon give students like Gerbasi and Scheer the opportunity to attend college tuition free.