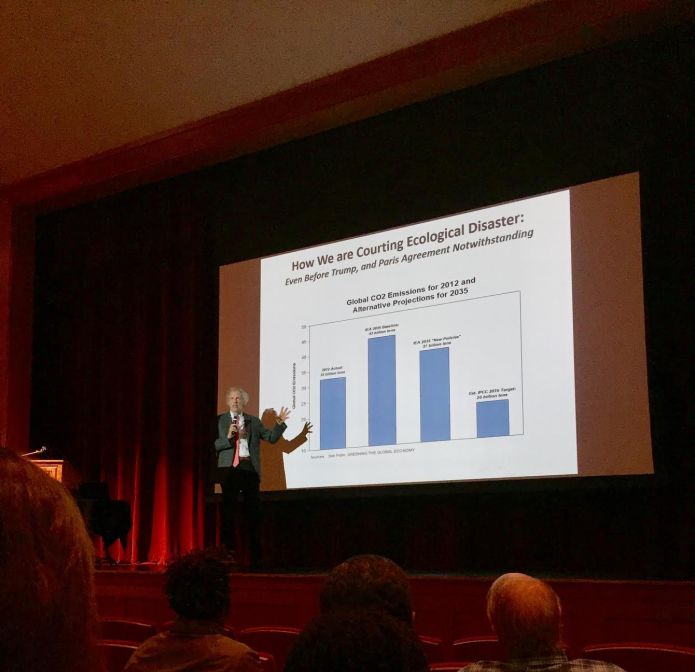 POUGHKEEPSIE, N.Y. — The week of October 23 was an enlightening one for Marist College students as Campus Sustainability Advisory Committee (CSAC) sponsored the school’s 11th Annual Sustainability Week. The theme of the week, “Sustainability: A State of Affairs,” was reflected in an array of events designed to raise awareness regarding the importance of environmentally-friendly living. Though the week has been a custom since 2006, the formatting has altered since its inception.

“Sustainability Week started many years ago…when it was known as Focus the Nation,” says Steve Sansola, the Associate Dean for Student Affairs and Co-Chair of CSAC. “We then shifted from Focus the Nation to Sustainability Week, in the fall semester. We thought that timing was so that we [CSAC] could think about it and plan it over the spring, and introduce it to faculty over the summer so they could incorporate it into their teaching in the fall. We’ll pick a theme based on what’s happening internationally, or nationally. This year’s theme is a state of affairs, what is happening in New York state.”

The first event of the week was a lecture by Keynote Speaker Dr. Robert Pollin, the Co-Director of the Political Research Institution at University of Massachusetts Amherst. The lecture, sponsored by the Marist College Autumn Lecture Series, occurred Monday, October 23 in the Nelly Goletti Theatre and was entitled “The Green New Deal: Global Perspectives and a New York State Program.”

Matthew Harris, the President of the Marist Students Encouraging Environmental Dedication Club (SEED) and an active member of CSAC, states that this was his favorite event of the week. “It was powerful, and he was well-spoken,” Harris says. “His [Dr. Pollin’s] talk gave hope that we, as a global society, can transition from fossil fuels to green energy.”

Sophomore Psychology major Nia Walters was also positively impacted by the presentation. “By talking about it, we’ll hopefully find a solution,” she says.

The lecture, however, was only one of several events planned. Other events included Campus Garden tours, the showing of an environmentalist film, Marist Ethical Fashion Initiative’s “Repair and Destroy” workshop, and an “Environmental Mixer” where interested students could mingle with local-nonprofits.

Emily Gorin is a Fashion Merchandising student and member of the Marist Ethical Fashion Initative (EFI), an on-campus group seeking to reform the way individuals view clothing. EFI strives to make progress towards sustainability in the fashion industry. Gorin believes that the most important aspect of the week is that it raises awareness. “I think Sustainability Week is important because it brings awareness to everyone on-campus about what they are doing to either help or hurt our environment,” she says. “We have a bunch of fact sheets posted, and I think those are kind of in your face and make you go, ‘I didn’t realize that it is such an issue.’”

Emily Gorin works on a piece of clothing during EFI’s workshop.

Though Sustainability Week has since concluded, the struggle for sustainable living is far from over.

“Marist has made progress in terms of sustainability, but it is far from being earth friendly,” says Harris. “We, as a community of students, should be lobbying for environmental sustainability on campus.”

Sansola believes that Marist is moving in the correct direction.

“We’re trying to do a lot promoting good food and nutrition – local food,” he says. “There is LED lighting across campus, recycling, our food waste is what we call ‘to grey-water.’ We used to compost, now we don’t, because of the burning of carbon…so it is the next step.”

Marist is attempting to set an example by incorporating these sustainable practices into on-campus living, chiefly because of the fact that the college is a developmental environment.

“Anything we can do to educate young people about a myriad of topics and in this case, sustainability, is important,” says Sansola.

Harris and Sansola agree on one thing in particular: the fact that they are optimistic that the student body was responsive to CSAC’s efforts to raise awareness regarding the necessity for sustainable living put forth during Sustainability Week.

“We try to make these events as engaging as possible and as high impact as possible,” says Harris. “By introducing students, via different mediums and topics, we hope to reach a large audience of students and make them aware of environmental opportunities on-campus as well as in the world.”

Sansola echoes this sentiment. “I just would hope that students be open to the importance of this issue and begin to make changes in behavior that represent more sustainable practices,” he says.