“In the beginning I had some hope that I was good enough to play on a D1 team,” said Petrocelli. Before coming to Marist, Petrocelli was involved with a team in Florence, Italy where he played for a team in the 1st and 3rd divisions.

“I didn’t transfer from a school, I only started going to school at Marist in the spring of 2015,” said Petrocelli. He was used to the Italian playing style, yet had to adjust to the technique of playing at Marist. “The experience of trying out for the team was something new and had a lot of pressure on me,” said Petrocelli.

His mindset was not the same as players who were on scholarships, recruited by the coaches to play for the team already. “I needed to work harder and focus more than other players,” said Petrocelli. This experience doesn’t have much normality to it. The mentality of, “I wasn’t sure if I was good enough to be playing with a D1 team,” said Petrocelli, was surely a common theme.

Despite the doubts and uncertainty Petrocelli faced during his journey to being on the D1 soccer team, he had his aspirations to guide him. However, accomplishments don’t come at ease. “So far the most challenging aspect of walking-on the team is keeping up with the fitness,” said Petrocelli. He’s come to realize that going to practice has some of the similarities of a job. Being on time, accountable, and giving all the effort you have are a few aspects. “Always working hard and focusing is a must to have a good practice, otherwise you’d be set aside, placed with the lower team,” said Petrocelli.

This journey Petrocelli has gone through has impacted him in several ways, changing him as a person and as a player. “As a person it made me stronger mentally and physically and as a player it has made me stronger and more focused mentally,” said Petrocelli. Being faster on and off the ball is another huge improvement and adjustment he’s made. “This opportunity enables me to build my experience in the soccer world,” said Petrocelli.

As for most athletes playing at a higher level than the one they’re at is a common tendency. However, Petrocelli sees the future of his soccer career in a slightly different direction. “In the future I’d hope to continue playing semi-pro, preferably abroad somewhere,” said Petrocelli. There is still work to be done and he can only focus on his dream thats in front of him.

Now with his experience and perspective of being a walk-on to a D1 soccer team, Petrocelli has knowledge he can confer. “If there was any advice I can give someone who wanted to walk-on to the team is to prepare yourself to work, for humiliation, negative comments towards you, to make friends, and be mentally strong,” said Petrocelli. There has always been adversity for Petrocelli, though with the extra work the reward has come.

“Be ready to do the extra work after practice so you are always a step ahead and come in with an attitude as if you know you already gonna be on the team,” said Petrocelli. 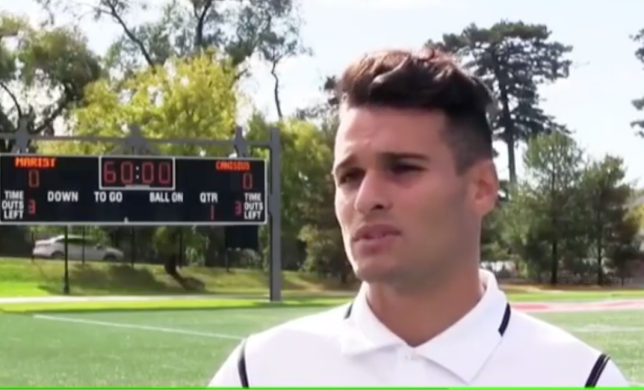