POUGHKEEPSIE, N.Y.—Marist College sits 2,549 miles away from Las Vegas, Nevada. That’s approximately a 38 hour ride drive. Yet, on the morning of October 2nd, the aftershocks from what had transpired the night before had rippled into the Marist community. The wounds caused by what can only be described as a senseless act of unprecedented violence were so fresh at Marist it felt as though it had happened in the area.

Stephen Paddock was responsible for the murder of 58 concert goers at a country music festival, with 546 additional injuries being reported. Like many Marist students, junior Dylan Reilly woke up to a mixture of shock and disbelief. “More than anything, I was just stunned,” said Reilly. “I sat on my bed for probably an hour just refreshing Twitter. I just couldn’t believe something like this happened.”

Hayley Critchfield, a member of Marist College Democrats who lives 4 hours away from Las Vegas in Los Angeles, woke up crying. “I practically grew up in Vegas, so this really hit close to home,” said Critchfield in a quivering, emotional tone. “I had friends at the event and family members in that hotel, so that morning filter in all of those text messages to make sure everyone was safe.” Critchfield added that the thought that someone she knew so closely could have been one of those affected by this terrible act was extremely frightening.

Inevitably, after a catastrophic event like this, a debate arises over if the event in question should be used as fodder to advance a political point or to attempt to enact societal change. One side of this argument is very adamantly opposed to this idea, insisting that the immediate time after the event should be used as time for mourning and grieving. The flip side of this proverbial coin instead wants to use tragedy to promote their agenda, claiming that the best time to promote social or legal change to prevent more tragic events from transpiring is in the immediate wake.

Critchfield sided with the former. “When I heard the news, and I was frantically texting everyone I knew to figure out how they were, I wasn’t affiliated with Marist Democrats,” said Critchfield. “I was just a concerned person praying that everyone I knew was safe.” Reilly took the opposite viewpoint. “The best time to enact laws like, in this case, gun control, is right after,” said Reilly. “It’s on everyone’s minds.” 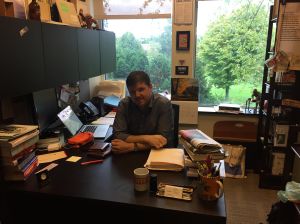 Another facet of the shooting of particular note to those on campus was how the media portrayed the shooter, Stephen Paddock. Critchfield pointed to a specific article by a major media outlet that described how those close to Paddock thought he was an everyday, normal person. “The media seems to be trying to justify what he did,” said Critchfield. “They still haven’t been able to comprehend that someone did this and they’re trying to find some sort of way to rationalize it.” Dr. Kevin Lerner, a professor of journalism, at Marist, attributes this to the nature of journalists. “Answering why someone did something is always the hardest question for journalists,” said Lerner.

Critchfield points to race as one of the contributing factors in Paddock’s post-massacre media image. “If he were a person of color, I can guarantee you those articles aren’t being written like this,” said Critchfield. Lerner credited the media’s depictions of Paddock to stereotyping . “The media does place these stereotypes on people of different backgrounds,” said Lerner. “Ife he, for example, had a stereotypical Muslim name, they would be looking into his internet history and if he was self radicalized.”  Marist College Republicans was asked for comment on Dr. Lerner’s postulations, but they declined.

Often times, moments of unthinkable tragedy can be the most galvanizing for a community. Reilly recalls how arbitrary stigmas like party affiliation and friend groups went by the wayside in the immediate aftermath. “Someone i didn’t know very well, that was clearly a very big Republican, came up to me and asked me if I was alright,” Reilly said. “It really made me feel proud that Marist was able to come together.” In the immediate aftermath of something like the Vegas shooting, many are quick to scramble and analyze the many facets of a story like this, from the political repercussions to discussions about media portrayals of the perpetrator. Through all of that discourse, Marist has managed to come together and heal as one.