On Saturday, Oct. 7, the McDonalds located on 733 Main St. in Poughkeepsie joined several other locations in the company’s attempt to bring back a rare dipping sauce known as Szechuan sauce. The sauce was only made in 1998 to promote the Disney film Mulan, but was recently referenced in the hit Adult Swim television show Rick and Morty. The third and most recent season of Rick and Morty was the most-watched in Adult Swim history, and many of its fans called for McDonalds to bring back their old dipping sauce. As a result, McDonalds announced it would bring back the sauce for one day, but the promotion did not go as planned.

The high demand for the sauce should have been easy to foresee as the episode of Rick and Morty in which the sauce appeared received over 11 million views. Yet some locations only received 20 sauce packets and others even received zero. This blunder angered the hundreds of Rick and Morty fans who visited the Poughkeepsie location, including several Marist College students.

Marist junior and passionate Rick and Morty fan Bruce Hayes was one of many disappointed Poughkeepsie customers on this day. He said when he arrived the streets were flooded and that there was a huge line inside McDonalds. “I’ve never seen anything like it,” Hayes said. 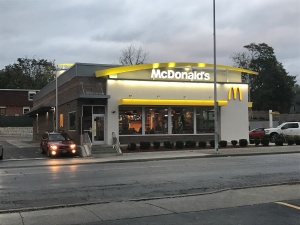 The McDonald’s on 733 Main St. in Poughkeepsie was among a select group of locations to distribute the Szechuan Sauce.

The sauce was expected to be available starting at 2 p.m. However, according to Hayes, the few packets they had were given away earlier in the day. Hayes said he was very upset as he hoped he “could go home with a backpack filled with this special sauce.”

Fellow Marist junior Vin Mangano shared a similar sentiment to Hayes. He said that when he arrived, he was told by other customers that there were no sauces left and that the whole thing was a “scam”.

“I was very disappointed and I think they handled it very wrong,” Mangano said.

There were many McDonald’s locations who promised the sauce that received a very rowdy group of angry customers. Some locations received organized chants of “we want sauce”. Fortunately, the Poughkeepsie location did not appear to have as much of a riotous group of customers.

The degree of craze over the sauce can be exemplified by the online bidding war for the few sauce packets that were actually distributed. The sauce has received bids on eBay for as high as $99,000. People have traded a single packet of the sauce in exchange for a car. Framed photos of the sauce are even being sold online.

McDonald’s has acknowledged their blunder and promised to make it up to their customers. Following the failed promotion, the company issued a formal apology to those who were unable get the sauce. In the apology, McDonald’s also said it will bring the sauce back once again in the winter and promises to have much many more packets available.

Both Hayes and Mangano say they definitely plan on returning for the next Szechuan sauce promotion, despite their current disappointment with how the situation was handled. McDonald’s likely knows that they will be among many customers who will be back for the sauce.