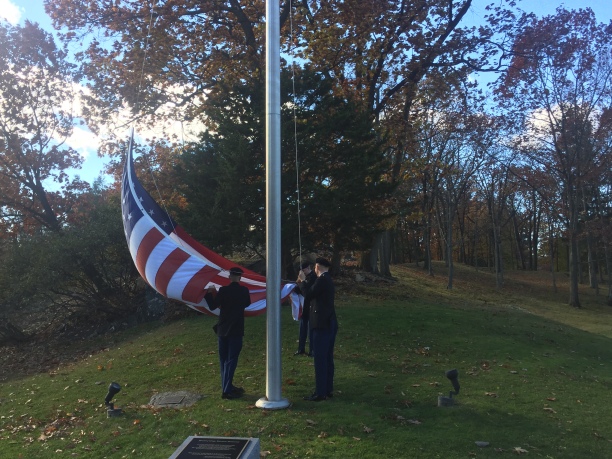 On Friday, November 12 people around the country and more specifically the community at Marist College recognized and celebrated all those who have served us in the armed forces.

“What makes America great is the people and the good they can do when they come together,” said Captain Paul Rinn class of 1968 at Marist College.

Captain Paul X. Rinn, USN, was the first commanding officer of the USS Samuel B. Roberts and was in command when the ship struck a mine in the Persian Gulf on April 14, 1988. According to some of the other Veterans at the ceremony, Rinn is responsible for avoiding the sinking of the ship when it hit the mine.

Rinn’s bravery along with the crew on the ship the day of April 14, 1988 earned him many accolades and also a book that was written about the day’s events called “No Higher Honor” by Bradley Peniston.

Some of his accolades include receiving the United States Congress’s 1989 National Day of Excellence Award, the 1989 Stephen Decatur Award for Operational Excellence, he was awarded five Legion of Merit Awards, and four Meritorious Service Awards.

“The ship’s tale of bravery and cool competence has become part of the Navy lore and a staple of naval leadership courses,” said Peniston in “No Higher Honor.” The book goes on to also say that no other U.S. warship since the Korean War has come closer to sinking in hostile action.

Despite going through some of the toughest moments of his life on the USS Samuel B. Roberts ship, Rinn never forgets the time he spent at Marist College. “Marist teaches us the importance of dedication, honor and integrity,” said Rinn.

Talking to Rinn you would expect him to feel a sense of entitlement when he enters a room considering his accomplishments but interviewing him felt easy. He even went so far to express his excitement on helping not just any student but obviously a Marist College student and respecting the work that I do as a journalist.

He credits his time at Marist for instilling some of the most important qualities in him, those of respect, hard work and treating everyone equally. Just because he’s a war hero and worked for a highly successful consulting firm in Washington D.C. doesn’t mean when he looks around a room he feels any different or better than the people that surround him. 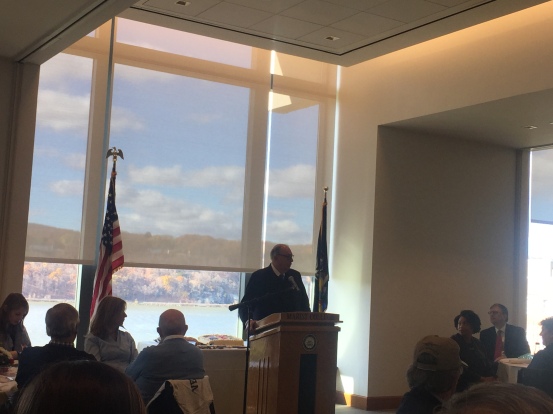 For other veterans like Marist College men’s tennis coach Tim Smith, who served his time in the armed forces in Vietnam said Veteran’s Day to him basically comes down to freedom. “Home of the free because of the brave,” is the best way Smith could sum up his feelings.

Smith’s time in the armed forces helped him grow as person, having the opportunity to oversee men on his ship from the age of 18 to 55. Because many of the men did not have complete high school educations upon entering the services, Smith took it upon himself along with a couple others teach the other men while at sea. By the time they came back and took exams to receive their high school diploma, 47 had passed the test and received their GEDs.

“My days at sea remind me of some the proudest and toughest moments of my life,” said Smith.

During the luncheon ceremony the guest of honor was class of 2002 Mariel Sosa Jaurez. She too discussed the emphasis Marist placed on teaching respect and the foundation for ideologies surrounding respect, integrity and honor. Similar ideas to those of her fellow alum Paul Rinn.

Sosa reflected on both her time spent at Marist College and Iraq at war just shortly after graduating in 2002, through the struggles and the hardships, the school ultimately molded her into the person she is today. She credits Marist College “as being her ticket out of the hood of Brooklyn, and that it wasn’t always the hipster place it is now.”

Sosa was one of many veterans sitting in the room being honored for their work in the armed services and their shared education from Marist College. For veteran James Barnes, class of 1968 at Marist College and current board member at Marist, he is extremely happy to finally see veterans being recognized on campus.

Unlike some students who come to Marist College after serving the country through the GI Bill, which provides educational assistance to service members, veterans, and their dependents. James Barnes and five of his classmates went into the services after their college graduation.

Today there are 75 students are who are currently active in the armed forces, and 350 veterans who count themselves as alum of Marist College.

“People that go to Marist College or any college should appreciate the opportunities they have because of the armed forces,” said Paul Rinn.