The wind rages at roughly 15 mph outside of Marist College’s chapel on a Friday afternoon. Timoteo Perez, a middle-aged Hispanic man, is slowly elevating himself on a mechanical lift to about midway on the school’s massive holiday tree. He grabs each branch individually, wrapping each one with a line of lights.

“I’m usually higher on the tree at this point during the day, but it’s only me today and the boss told me not to go any higher than halfway,” says Perez.

Along with his co-worker Aurelio Tapia (who called out sick on this day), Perez has been working on this tree for the past seven years. Every December, the tree radiates throughout the campus, signaling the end of the fall semester and the beginning of the holiday season for the community.

“We’ve received so much praise from around the Hudson Valley community for the tree, even from people with no ties to the college,” says Ralph Short, the Head of Grounds at Marist for 31 years. 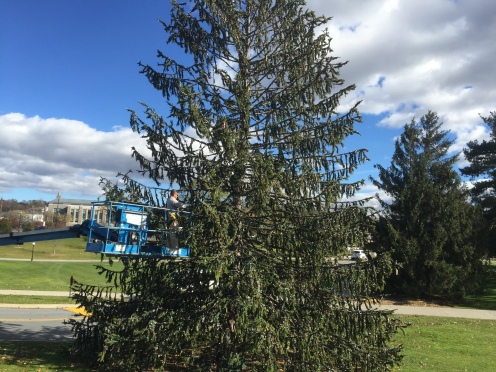 Perez working on the tree. Photo by Andrew Auger.

For fifteen years, Short has overseen the decoration of the “Marist Tree”. The idea originated from a visit into New York City that included Short and the Director of the Physical Plant Justin Butwell. The trip was originally meant to purchase holiday decorations, but Butwell saw the famed Rockefeller Tree and had a moment of inspiration.

“As you may have guessed, my response wasn’t exactly favorable,” recalls Short. “It’s a lot of work with so many factors involved like weather. The first couple of years it went down to the wire whether we could even finish it in time.”

This year, Marist plans to have their lighting ceremony on November 30th. Perez and Tapia started their work on Oct. 20 and have been working since then from 8 A.M. to 3 P.M. every Monday through Friday. They hope to wrap up their work on Nov. 18. From there, the electrical division of Marist’s mechanical team will ensure that the lights actually illuminate by the time of the ceremony.

“Every aspect of getting the tree done on time is a challenge,” says Perez. “Days like today I’m limited in what I can do, and we have to wrap every single individual branch. We can get it done in 2.5 weeks if the weather is nice, but we don’t chance it.”

Introducing: the faces behind the Marist Christmas Tree – Timoteo Perez (right) and Aurelio Tapia (left) • Name: Timoteo Perez Originally from: Mexico; Now lives in: Poughkeepsie Job title: Groundskeeper; Grounds Construction Department Time working at Marist: 26 years • Q: How long does it take to put the lights on the tree? A: It takes two weeks if the weather’s good! • Q: How many lights are on the tree? A: Last year there were 569 rolls of lights, but the tree is growing so it increases every year • Q: How would you describe yourself in 5 words? A: Ahhh that’s an easy question but it’s kind of tough. My kids would say I’m a good father but my wife, I don’t know what she’s gonna say. • Q: If you weren’t working here, what would be your dream job? A: I like the ocean so if I could I would work with marine stuff.

Working as a team, either Perez or Tapia stands on the lift while the other operates from below. Using a bit of math based on the amount of strands in each case that the duo opens, Short estimates that the tree features about 48,000 individual lights. Each light is composed of environmentally conscious LED material, with every fourth one glowing red and the rest glowing white.

The grounds team also works with an outside decorator by the name of Theresa Thayer to decorate trees within the interior of Marist’s Dining Hall and Cabaret Lounge. After they are done with their work on the “Marist Tree”, Perez and Tapia are reassigned to work on a tree at the Payne Mansion, a piece of historic property that Marist owns on the opposite side of the Hudson River.

Even with these important side projects, though, nothing is quite the undertaking of the main campus tree. Part of the job includes maintaining the lights throughout the season. Short was a bit amused to admit that one of the biggest concerns that they have about the tree are different students hanging from the branches at night.

“We work with security just to make sure nothing comes down or anyone gets hurt,” says Short. “It’s a bit silly, but important nonetheless.”

It's the most wonderful time of the year @Marist! #MaristMonday (📷: @stefanie.mongiardo)

The lights will stay on until Dec. 31, and then Perez and Tapia will have to undo the month’s worth of work they put in during the fall season. The breakdown can sometimes be just as difficult as the initial work, as the two have to brave the rain, snow and below freezing temperatures.

“It really depends on the weather when the lights come down,” notes Short. “Sometimes it’s as early as mid-January, and on an occasion or two they’ve stayed on until late March. Our top priority is the safety of Timoteo and Aurelio.”

Both Short and Perez agree that the most rewarding thing about working on the tree is seeing the final thing lit up and blistering throughout the campus. They also always anticipate one other annual tradition that may be in jeopardy this year.

“The president’s office usually sends us these really good cookies,” says Short. “Though I wonder if that’s in jeopardy with President Yellen in office now. I hope not, those cookies are delicious.”

One thought on “Before the “Marist Tree” can glow on Instagram, Marist grounds crew work to light it up”