The WMAR radio station is back and fully functioning.

Didn’t notice? You are probably not alone.

Marist College’s radio station spend two months dormant, unable to broadcast to the outside world. A technical glitch in the newly updated computer system prevented a connection to the online stream that feeds from the studio; a glitch that went unnoticed by the WMAR club board, the Media Center and the school’s IT department.

“The new computer has been messing up the whole system,” club president Dan Abramson said. “I was not aware the media center even bought [a new computer] until a few weeks ago.”

Mic 1 and the soundboard.

Abramson admitted he was unaware that the new Lenovo computer installed in the studio did not feature the Icecast connection program, aptly named “butt.” With no way to send out a feed, the studio, renovated just three short years ago, became in effect a big, glass tape recorder.

Abramson, a junior, is working without much of a support system. Faculty advisor Tim Mirabito departed the school this semester, leaving a hole in the club’s leadership position. In a quick survey of eight club members and two faculty members in the communications department, none were able to identify who the club’s faculty advisor is, if there even is one.

Though correspondence between the club’s board and the school’s tech department faltered, communication between the board and interested students wanting to set up shows of their own was equally limited. Following an early-semester meeting in which club members vied for time slots, students were left in the dark until October 19th, when Abramson sent an email to members apologizing for the delay.

“We got the IT department in there several times and they were having a lot of trouble fixing the problem, while the Media Center did not have the proper instructions to help fix the situation,” he wrote.

Members were far from thrilled at the slow response time.

“Could it have taken any longer?” quipped Billy Migge, host of sports-talk show “From the Parking Lot.”

Some took matters into their own hands, forgoing the scheduling process and entering the studio on their own volition, only to be stifled by the equipment.

“We were ready to go right away,” senior Jon Goldberg said. “We actually recorded for a whole hour without even realizing that we weren’t connected to anything. So that was awful.”

Goldberg, host of WMAR’s “The 7th Inning Stretch,” continued to vent his frustration. “It’s weird that we pride ourselves on being so technologically advanced, and nobody knows how to handle something that shouldn’t be that hard.”

Goldberg’s co-host, Aaron Gaberman, decided to take an alternative route to produce their show. Thus, “The 7th Inning Stretch” was streamed on Facebook Live, a decision that Gaberman feels works even more to his advantage.

“I think we were able to reach out to a lot more people,” Gaberman shrugged. “Not many people even know about the Icecast at Marist.”

The problem to which Gaberman refers to is a fundamental flaw in the WMAR framework. In fact, the Icecast debacle is emblematic of just how little an impact the radio club seems to have on campus.

With no terrestrial signal, one would have to listen to radio shows or sporting events online on either their phone or laptop. In theory, this expands the range of accessibility, in that listeners would not have to adhere to the limited wattage of a terrestrial signal.

However, promotion of live online streaming is difficult, as students are quickly learning. Facebook Live stores videos, so that streams can be re-watched at a later point. WMAR has no storage system in place beyond the live Icecast, and does not post any recordings of their shows to the Marist Media Hub. Recording shows or using Facebook Live as Gaberman and Goldberg do does not seem to occur to radio students as an option.

“You’re better off doing podcasts,” director of the Center for Sports Communication Dr. Keith Strudler said of the Icecast. “This? I don’t know of anyone who listens to this.”

The radio club’s lack of promotion on the Marist Media Hub especially agitates other media-based clubs. Andrew Auger, president of the Marist College Television club, lamented the lack of radio content online to coincide with the faithful postings of his club.

“It’s a detriment to all of us if a wide variety of content isn’t being posted,” said Auger. “I think the point of the site is less ‘news publication-y’ and more a creative outlet. The radio shows and podcasts…would be perfect for that.”

“We want to validate the hard work we put in,” Auger continued. “We want to create…a backlog of material for our directors and talent, plus it puts us right there with the rest of the arts clubs.”

Auger displays an awareness for marketing that is absent from WMAR’s staff. Despite Auger’s wish to have the arts clubs united on the Marist Media Hub, the two media clubs are in drastically different conditions. MCTV posts any and all content to its page. WMAR’s page, while it lists titles of radio programs, features zero content. The one show in storage online is a calendar year old.

The radio club has its own webpage online, though it has not been touched since the spring of 2014. Neither their Facebook page nor their Twitter page has been updated since April 26th.

Former WMAR secretary and sports assistant Dave Hughes commented, “You put effort into the show and if nothing comes out of it, it’s pointless.”

Even WMAR’s live broadcasts of on-campus sporting events seem to fall on deaf ears- or perhaps no ears at all. Students are able to provide play-by-play commentary for major sports like basketball and baseball, yet receive no promotion from the club or the school’s athletic department.

“It was pretty much an afterthought almost always,” former Athletics intern and Marist alum Janie Pierson noted. “They would reserve the space, but it wasn’t ever plugged or advertised.”

Pierson, a former WMAR show host herself, now works as an Athletic Marketing Assistant for Villanova University. She acknowledged that Wildcats sporting events are all called by professional broadcasters, especially in major sports. Villanova’s sports are more prominent in the national media than Marist’s, by virtue of conference and, to speak frankly, ability. It is understandable that students would not have much opportunity to broadcast their games given the raw size of their audience.

Why, then, would Marist ignore such a prime hands-on opportunity for their aspiring broadcasters? What should be a prime chance to garner a listening audience predicated on a rare student-produced experience is shunned.

There is at least one program recorded on the Marist campus that is treated as a professional production. Dr. Strudler, who served as the WMAR faculty advisor once upon a time 12 years ago, hosts Marist’s radio program, “The Classroom,” which airs on ESPN 1220. To record his show, Strudler does not even utilize the radio station. Instead, as of this year, he and his crew set up camp in the television studio two floors up in the Lowell Thomas building.

Strudler explained that his ESPN radio show is not live, and that the broadcast feature in the radio station had no influence in his moving upstairs. However, the big, glass tape recorder, as it happens, is not of a quality to the director of Strudler’s liking.

“That is not a real radio station,” Strudler joked, mocking the room’s aquarium-like

architecture. “It looks like no station I’ve ever been in in my life.”

“The sound quality sucks,” he elaborated. “There’s a hiss we’ve been fighting for our entire lives and no one seems to know why.”

Even with a multi-million dollar renovation of Lowell Thomas, facilities are ill equipped for audio recording. Last spring, Marist College invited star actor and local resident James Earl Jones to campus to record a farewell message to the school’s outgoing president, Dennis J. Murray. Jones was ushered not into the radio booth, but the television studio. According to multiple sources, Jones could be overheard inquiring as to whether or not Marist had any enclosed, sound-proofed studios to negate the natural sound that bled into his recording.

Marist’s campus has nothing of the sort.

An overall lack of understanding of how the studio works is, according to Dr. Strudler, one of the biggest flaws of the club. Students are not trained to use the studio by the club’s board or the faculty advisor, and the curriculum of the school does not ever so much as set foot in the studio. Dr. Ryan Rogers, a broadcasting professor at Marist, speculated that classes were forbidden from using the studio because it is designated as a “club space” and not a “class space.”

Consequently, Dr. Rogers’ various broadcast-oriented courses, as well as Tim Mirabito’s sports broadcasting class, would direct all of their radio instruction and presentation to a makeshift setup in the television studio.

Communications major Skyler Van Valkenburgh, who took Dr. Rogers’ “Producing the Newscast” course last spring, admitted that not much emphasis is placed on joining the radio club on the part of the faculty.

“I think he mentioned [WMAR] in passing,” she said, “but I have never stepped foot in the studio.”

Both Dr. Rogers and Dr. Strudler confirmed that faculty in the communications department do not formally promote the radio club, though they will occasionally give a brief word of encouragement.

Van Valkenburgh, currently taking Broadcast Newswriting with Dr. Rogers, is regularly tasked with generating audio packages and recordings for projects, yet “never” uses the studio to lay down a voiceover. She cited intimidation of the difficult learning curve as a major reason why.

“I have no idea how to use professional audio equipment. No one’s told me how.” 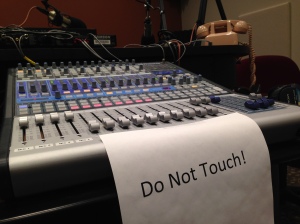 “There’s a larger issue in that people don’t know how to use the equipment,” Dr. Strudler began. “We’d come down [to record ‘The Classroom’] and everything would be screwed up, because people go in there and start playing with knobs because they think it doesn’t matter.”

“There’s a real issue of accountability,” he sighed. “They’re just kind of let loose and playing with stuff.”

Students like Van Valkenburgh who want to casually learn to use the radio equipment on a whim are out of luck anyway, as students need swipe-card access into the studio, which they can only get if they are a registered member of the radio club.

There is an audience for WMAR content. MCTV videos, especially news and sports-related episodes, can reach as many as 200+ views on their YouTube channel. Jon Goldberg’s latest Facebook Live feed of “The 7th Inning Stretch” has 153 hits and prompts several comments. And even though the audience may be dwindling, participation is still relatively high. Dr. Strudler himself is quick to admit that radio is far from a “dead art.”

Marist radio can rise again. It will require fundamental change, more universal education and elbow grease, but WMAR is not dead yet.

They just need to find their footing first.