Senior year, as in the last year of undergraduate college is a time to never forget. From turning 21, to having real world internships and job offers, there is an array of differing life changes that go on for each individual. What seems to be a common trend throughout most seniors however are the bodily changes that occur without being desired.

These bodily changes do have a method to their madness and it’s clearly the extremes that college seniors put themselves through. These extremes include, fluctuating diet, constant legal drinking and partying, lack of sleep, high levels of stress, and lack of physical activity. These all apply to every college student, but what makes them very effective on seniors, is that everyone is trying to get in their last hurrah of childhood and taking in every experience they can, which can mean being more lazy, drinking those extra tequila shots or cooking those late night nachos.

It’s clear to almost every student that their body is naturally going to be more mature than when it was as a freshman due to age and metabolism changes. This realization is one that seems to come across many seniors as they realize that they lack the vitality they used to have, especially after a night out binge drinking. Jared Boba, senior, confirms, “As the years go on the hangovers become increasingly worse. I feel more dehydrated and have a harder time doing things the next day after I drink. It definitely takes a toll on my weight as well. I notice my face is puffy when I am drinking every weekend.”

Worsening hangovers seems to be a common theme as Julia Sangiorgio, senior, agrees, “I am definitely more tired in the morning and find it more difficult to wake up. I also used to be able to work out with no problem after a night of drinking, but now it is a rarity. My hangovers have also have gotten worse throughout the years.”

What does change also is the concept of actually being 21 now. In the past one is unable to get a glass of wine or beer whenever they truly want to but now it obviously changes, “Being legal makes me drink more casually. Now I will get a drink at a restaurant or just have a beer or two whereas it used to be more of a thrill to get drunk.”- Jared Boba. Even though it is casually, it still increases the constant consumption of alcohol, and the constant flow of carbohydrates. 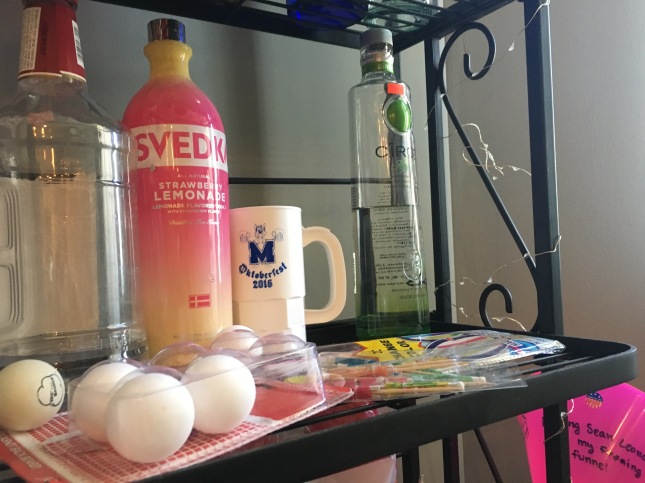 A typical grouping of partying items in upperclassman houses.

After generally understanding that the high intake of carbohydrates is fueling this unwanted physical distress, it was clear that a professional opinion was needed.

When asking Lynn Leathers a certified nutritionist of Wisehealth, what she feels makes a difference in this weight gain senior year she explained, “When we have a lot of stress (which may be increased in senior year as students think about their future) our body doesn’t function as well and we don’t absorb nutrients, especially because our organs don’t work efficiently. As our bodies mature, unfortunately people need to be a lot more conscious about what they consume.”

She also explained that, “if your diet is not good, there is more stress, not as much exercise, and maybe some doubt about going into the real world, the toxins in your body add up, as you drink more alcohol, consume sugar, processed foods, and foods that are not organic, its harder for the body to maintain its best body weight.”

After asking this professional I further examined a few seniors’ current dieting habits. When it comes to diet there were varying views from seniors who either go to the extreme of doing juice cleanses to combat all the partying or to the extreme of really indulging often because they aren’t strict with themselves. Jenny Loughlin, senior is in the middle of a juice cleanse and explained to me why, “ After a week of partying with a slower metabolism than I once had, it’s easy to say I’m going to eat healthy, but when you spend over $100 on a cleanse, its much easier to stick to my word for a fresh start physically.”

Julia supports the counter idea as she said, “I do not maintain a strict diet. I do try to eat generally healthy, but I definitely indulge in unhealthy foods. However, prior to college and going into freshman year, I was extremely active and ate whatever I wanted, in whatever quantity I wanted, so I would say I do not eat the same as I did in the past, but I also do not exercise the same either.”

One would conclude from all of these opinions that these students are aware of their habits and either do something conscious about it or just let these somewhat unhealthy habits continue.

It’s clear that the general college population lacks keeping up with fueling their bodies with the right things such as vitamins, plenty of water, and complex foods such as broccoli. Seniors however, take it to the level of not caring as much because they would rather have great memories of drunken nights out or that amazing burger and pint of beer at Schatzi’s in Poughkeepsie. As Jared says, “I think it is hard to have your dream body in college. I have tried to maintain a balance of enjoying myself and not going too crazy about it, while still trying to make somewhat healthy choices so I am not too far-gone for the future.”

As we grow older and the realization that our little high school bodies are no longer possible, the idea of giving up nights out, exercising more, and giving up carbs is definitely less appealing than just enjoying all those things somewhat damaging to our bodies. Most students definitely feel that they have the rest of their lives to eat and drink less, so as of now why not take full advantage while our bodies can somewhat bounce back in a less severe way.

Jenna Horton, senior, said it herself, “There will be a point in time where I’m going to go out four nights a week only because I’m a senior, and will stop worrying about the little things such as calories, and I think that’s the way you’re suppose to end you’re college career.”