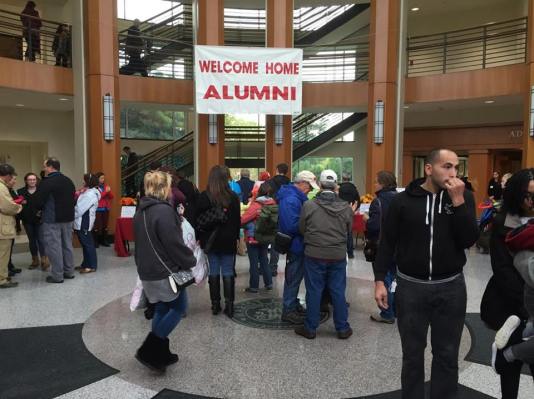 Alumni gathering around the Rotunda

Is there life after college? For all former Marist students, the answer would be yes. But when the opportunity comes around to relive the four primitive years of the college experience with all who made it so wonderful, life in the “real world” can be put on the backburner for just one weekend.

Marist College held their Alumni Weekend this past weekend, a three day event that welcomed back graduates ranging from the class of 2016 to the first graduate class of 1947. Returning alumni were welcomed back to the campus with a variety of activities and ceremonies which included class reunion celebrations, the annual Homecoming Football game, an alumni family picnic, and even tours of the campus with all of its alterations over the years.

Even recent graduates who had never visited for alumni weekend were certainly thrilled to be back on campus.

“The thing I was most looking forward to is just being surrounded by a group of people I love and just being together,” said Zach Russo, who just graduated as a part of the class of 2016.

“For me there’s a special kind of joy that comes from the camaraderie of being with good friends in college, and having that was so nice.”

For other students who had already visited for past alumni weekends, such as class of 2015 graduate Marissa Russo, the expectations set down were certainly met.

“If I had to label alumni weekend with one word, I would probably say overwhelming. You are overwhelmed with emotions, but also being pulled in a million directions to see all of your friends and visit all of the places you want to revisit,” said Russo.

When asked which places were most desired to revisit, Russo gave an answer shared by many alumni alike:

Even other alumni, like class of 2014 graduate Jen Laski, who was visiting for alumni weekend for her third time, still got some of the butterflies from returning as she did her first time.

“I miss it a little bit less every year, but I think I’ll always miss the campus, clubs, and the good old times,” said Laski.

“Having all my close friends together in one place all the time, even if it’s just for one weekend, still reminds me that my time at Marist was the best four years of my life.”

As these alumni get older and establish their adult life, you would think the wonder and magic of Marist years past would go away, but Brian Apfel, graduate of the class of 2007 and Marist’s current Director of Social Media and Summer Pre-College, says otherwise.

“A lot of my friends certainly enjoyed coming back, especially now with their families, so they could share the Marist experience,” says Apfel.

“It’s always exciting to see their transition as far as how they are growing family and profession wise.”

Alumni Weekend at Marist will always reap excitement from those who visit, serving as a celebration of what was, but also what will be.

Alumni taking a bite to eat with a river view