What would you be if you stayed a college senior forever?

For many Marist College students, the answer to this question would probably be happier, less stressed, and more youthful. But staying a senior forever just won’t happen. This fear has caused an outbreak in “September Senioritis,” a combination of anxiety due to increased schoolwork, yearning for senior year festivities, and no grasp on the direction their life is going in post-graduation.

“I feel like I’m drowning,” said Kim Kenny, a senior majoring in Media Studies and Production, president of MCCTA which is one of the biggest clubs on campus, and working long hours daily with the Student Activities staff.

For Kenny, Marist has been her home for four years, and while she had the option to graduate early due to her heavy credit load from high school, she added extra minors and even studied abroad in London to make sure she was here for the full four years. But even with that added time she is still wavering on post grad plans.

“I recently realized that I would like to go into a different field than I’m planning to get my degree in. So finding internships for the spring in this new field has become overwhelming to say the least,” said Kenny.

But for many faculty members who deal with these apprehensions year in and year out, the solutions remain the same.

“Don’t be afraid of the process. I was scared to death. It all ends just like that. But you have to move on,” said Gerry McNulty, Internship Coordinator at Marist College who has seen his fair variety of anxious seniors panicking about what their future will hold.

“Looking for post-graduate employment is a long and tedious process. But it has been no different since I graduated 36 years ago,” said McNulty.

And while technologies and hiring methods have changed over time, the basic principle of networking, seeking out the best location for your career path, and the overall application process for landing these jobs remain the same.

But McNulty remains optimistic on the success that these seniors will have despite all of their fears and concerns.

“These seniors have had substantial records of success throughout their whole college career, yet now they think they are going to fail right off the bat once they leave?” said McNulty. And he certainly had the numbers to back up the success.

“60 percent of our seniors have had internship experience, 10 points above the national average. 92 percent of those interns were rated as outstanding by the companies they worked for. And 91 percent of seniors last year were either hired by a company or entered graduate school. So just keep going. Be persistent,” Said McNulty.

But for many other seniors, the crippling “September Senioritis” relates to the other faction of that 91 percent: Graduate School.

Pat Taylor, Graduate School and Fellowship Advisor at Marist College, is quite experienced when it comes to the anxiety from seniors looking to further their education post grad school.

“I had no idea what I wanted to do post-grad. It took me 7 years to decide to enter into graduate studies at Columbia for what I was passionate about. Some grads know what they want to do, but most really don’t,” said Taylor.

Taylor frequently sees students coming in to her office looking for graduate college advice around this time. Many with motives that she would certainly not recommend. Motives such as parent pressure and  lack of success finding a job post-graduation.

Taylor also deals with students facing the pressures of major scholarship applications for post-grad, one of those students being Bekkah Colclasure. Colclasure, a senior fashion merchandising major, is looking to become the first Marist College Student to be awarded with the Marshall scholarship, which would give her a full ride to the London College of Fashion for graduate studies.

There is only a 3 percent chance that Colclasure will win this scholarship, but she wants it more than anything she has ever worked for.

“I have been working on this application since Junior Year. It’s soul sucking, it’s time consuming, and it’s stressful. Applying to College was easier than this, but I want it, so badly, it would be the greatest achievement of my life,” said Colclasure.

For other students, “September Senioritis” has to do much more with their present anxieties and the crazy thought that their college career is ending. Alex Westervelt, a senior IT major at Marist, is already starting to feel anxiety from the increased workload that senior year is bringing.

“I already have a bunch of big papers due for my capping class. I’m worried that the rest of the semester will only get worse from here.” Said Westervelt.

Westervelt also can’t deny that life post-grad won’t be as casual or carefree as his college experience has been so far.

“Marist College’s vibe as a whole just seems more relaxed than the working world. I am so accustomed to the daily, weekly, monthly routine of what college entails, it’s going to take a while to adjust,” said Westervelt.

But unlike most seniors, Westervelt has the luxury of a job option post-graduation with Motorola, but isn’t looking to brag about it.

“It’s certainly a relief to have that option on the table, but I’m waiting to see what comes up. Try to compare and contrast,” said Westervelt. 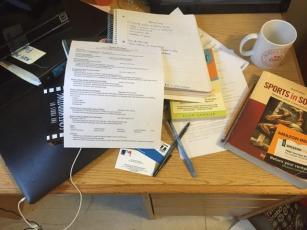