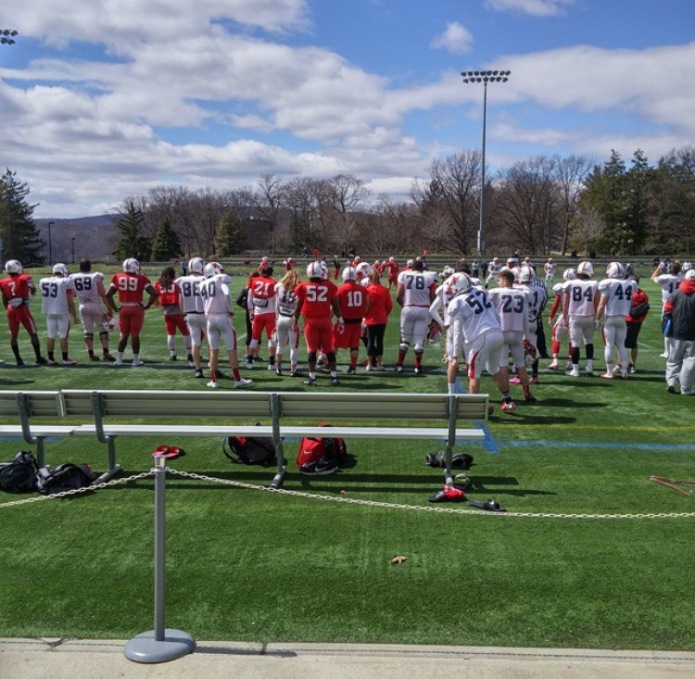 Marist College coaches, athletes, and athletic trainers have been taking precautions this preseason for the intense heat that has taken over the Hudson Valley. It has been a hot, humid, and steamy summer, which left Marist College preseason athletes begging for the chill of winter! In the short amount of time in August since Marist student athletes arrived to begin preseason, the average temperature was between 85 and 90 degrees. Think that sounds like a perfect day on the beach? How about trying to enjoy that beautiful beach with 35 to 45 pounds of football gear on, like our friends on the Marist football team.

Marist College Head Football Coach Jim Parady had some great ideas when it comes to the heat affecting his athletes and keeping their heads in the game. During the Marist Football preseason, which began on August 10th, there was a seven to ten day stretch where the temperature exceeded 90 degrees.

“The heat 100% affects my athletes. I honestly believe it affects them before they even get on the field. As a coach you can feel the stress that they have about it.”

Marist Football getting ready for practice

Parady was clearly aware of the effects that the extreme heat was having on his athletes and was ready to make some changes.

Parady explained, “Once the contest or practice begins on those days when we have extreme heat we take different avenues to cool our athletes down. This was our hottest preseason camp that we had so far. We were scheduled to practice in the afternoon and then changed it to early mornings to try to beat the heat.”

Marist senior running back Leon Cummings expressed just how hot it was this preseason, saying that, “the whole team usually stays in Champagnat Hall together to bond as a team. This year Coach sent the upperclassmen who have off-campus housing with air conditioning home at nights because it was just too hot for anyone to handle.”

This preseason gave the Marist Football players some practice for the upcoming season, considering this past Saturday’s game against Georgetown was the highest temperature Marist has ever had for a home contest.

Coordinator of Sports Medicine Jeffrey Carter and Assistant Athletic Trainer Amanda Greco were especially nervous for the football athletes this preseason because of the heightened conditions. Carter and Greco explained, “we had to make sure that each player was properly hydrated. Even when we did that, players still came into the trainers overheated and dehydrated.”

The football team is not the only team taking the heat into account; Marist’s undefeated men’s soccer team isn’t taking any chances either. Freshman MAAC Soccer Rookie of the Week, Michael Lorello, even had a hard time adjusting to the heat this preseason.

“It was as if we were playing in Florida in the middle of the summer. Hot, humid and sticky.”

Lorello was happy that his coaches made sure that all the soccer athletes were getting the proper nutrients they needed to keep their undefeated streak alive this season.

Stay hydrated, eat right and cheer on Marist College Athletics this season to help them beat the heat!