Everyone intrinsically feels that “signal” when summer is drawing to a close and fall is beginning to commence. That one week in September that has picture perfect weather, the perfect amount of sun and breeze that leaves everyone asking themselves, “why can’t this last forever?” That is exactly how a day like September 11 started out both fifteen years ago and now- a brisk, picture perfect September morning full of hope and wonder as to what the rest of the year will bring. 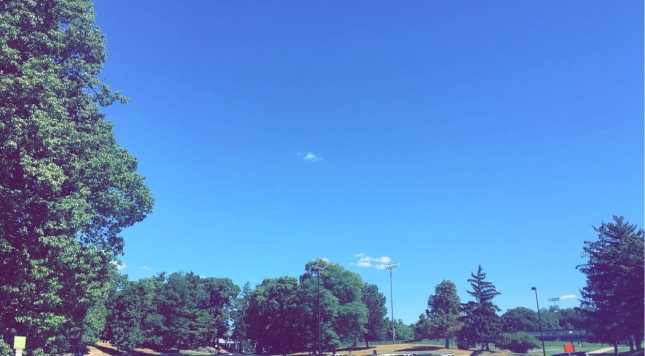 It’s weather like this that has everyone on their feet, whether it is in anticipation for a successful school year or getting into a new routine. The familiar sounds of school bags jostling in succession to the bus stop and cars backing out of the driveway are coming back in full force, and much like the weather signaling that a change is about to occur.

For those who woke up on September 11 fifteen years ago, today’s weather is very similar to what the weather was like back then- full of life and curiosity.

A senior at CUNY Hunter who lived in Pennsylvania as a youth recounted his memory of that fateful morning. “As a six year old boy living in Pennsylvania at the time, I don’t remember much about 9/11. But I remember that it was very beautiful. The skies were incredibly blue, and the sun was bright. In hindsight, it almost seemed like a cruel joke.” Another senior at CUNY Baruch, Michael Skok, stated that he “didn’t remember much of that day, just a specific feeling.” A junior at the same school, Mary Grace Donohoe, said that there was “a feeling that was permeated by the frantic looks of older individuals.” Anna Bautista, a senior at City College at CUNY, said that the “the bright blue skies seemed to add to the surrealness.” Her brother, Christian Bautista, a sophomore at Stuyvesant highschool, said “9/11 was a normal, beautiful day for most kids, but it was one of the only days that I was told to never leave the house.”

Despite the dreadful stone cold facts we know now, there is an inner peace that can be felt between the glistening of the trees and the rustling of the leaves.

The summer haze that has blanketed our minds begins to shed itself. The lethargy that is a classic symptom of summer begins to dissipate, and we find ourselves awakening between the eclipse of night and the dawn of day. Those that wake up for the early morning grind and endure the perils of rush hour inevitably curse their misfortune as the sweaters they brought for their morning commute become useless by the day’s end- but that is a misfortune that can easily be afforded.

The weather, it seems, is the perfect complement to an incredibly important and emotionally moving day. It uplifts the spirit and the hopes humanity has for a better tomorrow. As the morning chill lapses into the warmth of the sun, today’s weather marks a fitting transition from one season to the next.