As I was signing my year-long lease two years ago, focusing on controlling my sometimes disobedient cursive “z”, my landlord told my seven friends and I that the most practical skills administered in college are learned when dealing with off campus housing.

Since, I have learned, mostly through trial and error, to fix a broken chain in the toilet tank, make out a rent check, memorize the scheduling of garbage day, familiarize myself with City of Poughkeepsie ordinance laws, and discovered the amount of burnt popcorn fumes it takes to send the fire chief to your front door.

According to a representative at Marist Housing and Residential Life, “at any given time there are 200-300 students that have chosen to live off campus within a 2-3 mile radius.” Selecting an off campus house, thus deeming yourself “a commuter” to Marist, presents numerous opportunities and considerations. 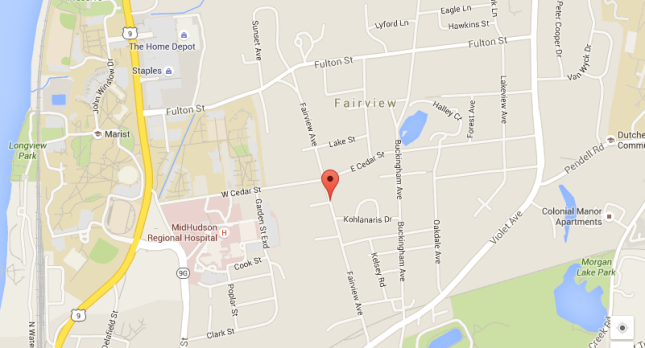 Fairview Avenue: Fairview Ave, located in the Town of Poughkeepsie, is notoriously known by upperclassman as a lively area. Kimberly Springler, Marist senior, has lived on Fairview since July and loves her location, despite the noise. “Fairview is a really loud and busy street to live on. There are always cars blasting music and people walking on it,” she says, “but I live close to all my friends.”

Cost: Rent on Fairview ranges from around $560-$600 per month, (excluding utilities) according to Craigslist ads and verified by Springler and Fairview landlord who rents to Marist students, Margret Buoncora.

Safety: Due to its high activity, Springler says she “feels pretty safe,” in her home on Fairview. Buoncora, who has rented her property on Fairview since 2011, says she has never had a safety incident with her any of her tenants. Although there was a sexual assault of a Dutchess County Community College student on Fairview Avenue this past October, the event was isolated and there was no involvement of Marist students.

Convenience: Only one mile from campus, Fairview Avenue resident and Marist senior, John Peyton, said it’s close enough to walk. “Three of my housemates don’t have cars,” Peyton said, “they catch rides with us when possible, but walk around half the time.”

Neighbor relations: “My neighbor on Fairview complimented my students for being respectful of the area,” Buoncora said.

Rowdiness: High. An assumed Fairview resident, @FairviewTownies, tweets exclusively about the noise on the street. Sargent Gary Hulbert at the Town of Poughkeepsie Police Department, however, said there has only been one nuisance ordinance violation this semester. 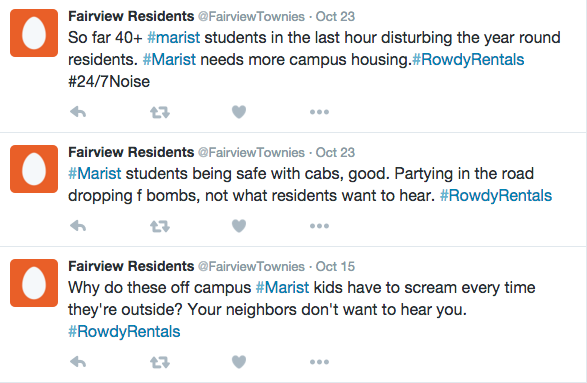 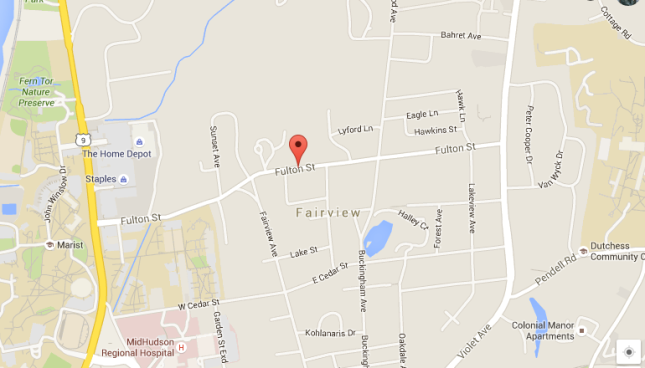 Fulton Street: Adjacent to Fairview, Fulton Street is the spine that connects many of the off-campus neighborhoods in the Town of Poughkeepsie. Despite it being a main road, it has the ubiquitous reputation of being a quiet, residential street. Patricia Hogan, a landlord of a home on Fulton Street, says she tells all of her tenants ahead of time that it’s a quiet house. “I don’t rent to anyone else,” she said.

Cost: Between $650- 700 a month, according to two separate tenants living on Fulton Street and confirmed by Hogan.

Safety: In the eight years she’s rented her property exclusively to Marist students, Hogan said she’s never once had an incident with safety.

Convenience: Less than a mile from campus and close to the shopping plaza on Route 9. “I’ve walked to campus and the shopping center with Applebee’s and Giacamo’s. It’s easier to be able to have all these places close to you in case you can’t drive for some reason,” senior Michael Cracco said about living in the seven-person hockey house on Fulton Street.

Neighbor Relations: Although they’ve received noise complaints from a neighbor on their street, Cracco’s house feels that they maintain fairly positive neighbor relations, often chatting with the locals when they see them raking leaves in the yard. “I’d say for any future people living off campus to just respect your neighbors,” Cracco said.

Rowdiness: Low, except for particular times. “It can get rowdy on specific weekends like alumni weekend and syllabus week, too,” Cracco said. Hogan agrees that she only gets complaint calls from neighbors “every once in a while,” but on the whole that Fulton Street is a quiet area. According to police reports, there have been three nuisance ordinance violations filed this semester. 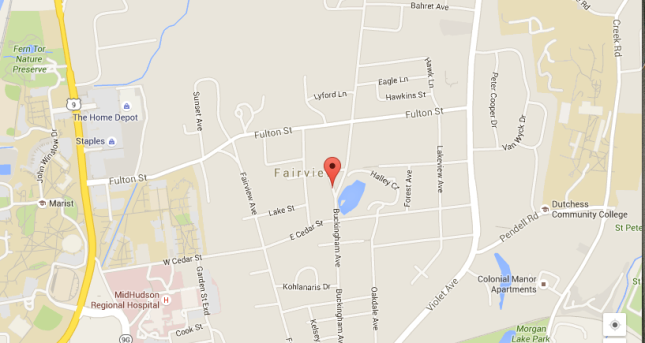 Cost: Roughly $675-680 a month, (without utilities) according to a Craigslist listing and several Woodlawn residents.

Safety: Carly Burt, senior, said the only incident her and her housemates have incurred on Woodlawn was the stealing of a package off their front porch. “Now UPS makes us sign for every package delivered,” she said.

Convenience: A mile from campus, walking distance from Fairview Ave and many other off campus groups of Marist students.

Neighbor Relations: “A ton of college kids live on the street,” according to Burt, although her local neighbors are mostly older couples who keep to themselves.

Rowdiness: Low. Despite the community of Marist students congregated on Woodlawn, residents agree that the streets are tame and quiet. There has only been one noise complaint filed with the Town of Poughkeepsie Police Department this semester. 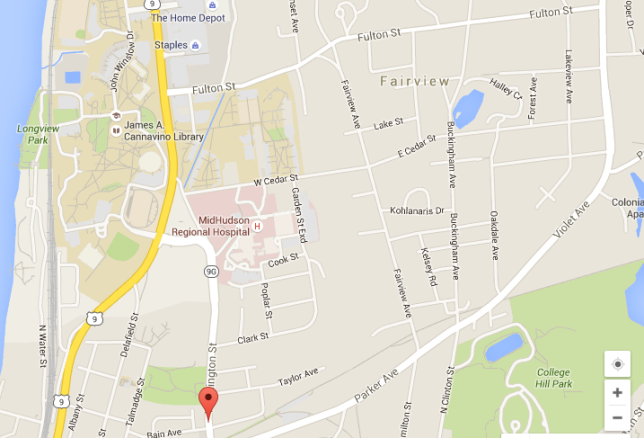 Cost: Rent runs students about $600 a month, according to two student residents.

Safety: Walkable sidewalks leading to Upper West where you can safely cross under the underpass.

Convenience: High. Less than a mile to campus, and safely walkable. Also nearby is Lola’s Café, Walkway bridge and Gulf gas station. Noise ordinance laws are more lenient from the town to the city. In the city and the town, there is a noise ordinance that goes into effect from the hours of 10 PM to 7 AM that prohibits “unreasonable noise.” Additionally, the Town of Poughkeepsie has instated a Nuisance Party Ordinance, constituted by any one of 12 conditions, that is punishable by a fine of no less than $250.

“The data this year so far is about 15 off-campus houses we have followed up with.  Approximately, 43 individuals for the noise or party ordinance.  Some of the areas include Fulton Street, West Cedar, Fairview, Chestnutt, and Woodlawn.  I do not get many reports related to our students in the City most come from those living in the town,” said Daniel Hoover, Director of Student Conduct & Greek Affairs.

Neighbor Relations: In the year and a half he’s lived on Washington Street, senior Vincent Cassous said he’s never had a negative experience with any locals in the neighborhood. “People have actually been very nice saying hi when you pass by them,” he added.

Rowdiness: High. According to the City of Poughkeepsie Police Crime Assistant, Jessica Teller, there have been nine noise complaints filed on Washington Street throughout the past year. “It’s a main road, so it can get noisy with trucks and sirens sometimes,” Cassous said. 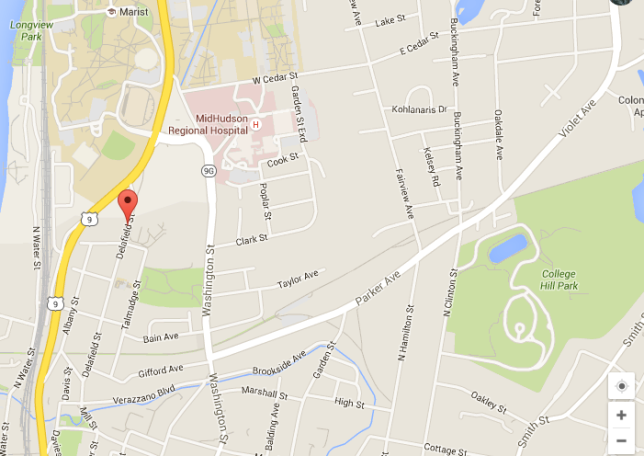 Delafield Street: Parallel to Washington Street in the City of Poughkeepsie, Delafield Street has been known to play home to Marist students over the years.

Cost: Between $475-$525 a month, according to two student tenants and several Craigslist listings.

Safety: Art Mahony, a contractor that’s been renting on Delafield to Marist students for four years now, said that there has never been a problem with his tenants or other students on the street that he knows of. “It’s a pretty safe area,” Mahony said, noting the children’s school on the street.

Convenience: Delafield Street is a half a mile from campus with easy access to the Walkway bridge. Also in walking distance are: Lola’s Café, Cosimo’s Brick Oven and Mahoney’s Bar. Delafield has a municipal parking lot, directly next to a Marist student house, where overflow parking, accessible to anyone, can fit comfortably. Additionally, tenants without cars will find that walking up the sidewalk on Delafield or crossing over to Washington Street will safely bring them to campus.

Neighbor Relations: Courtney Cousineau and Shayna Savidge, residents in a multi-complex Marist student house on Delafield, say they have a friendly relationship with the woman the lives next door. Down the street, Thomas Robbins, a Poughkeepsie local who has lived on Delafield for 23 years, said he’s never had any interference or interaction with Marist students living on his street.

Rowdiness: Low. In the past year, there have been two noise complaints filed on Delafield, according to the City of Poughkeepsie Police Crime Assistant, Jessica Teller. “It’s not as quiet as it used to be,” said Robbins, admitting still that he is rarely woken up at night by any loud voices or passing cars. Savidge, who lived on Washington Street the semester before, said that Delafield is a quieter location in her experience. Generally, she said, her and her housemates relocate to friends’ houses on other streets and do not test their neighbors’ noise tolerance.

After an off campus fire killed two Marist students in 2012, fire codes have become a central topic when considering off campus housing. Town of Poughkeepsie Fire Inspector, Lenny Splain, said, “one of the big things we do is make sure there is smoke detectors in every bedroom and carbon monoxide alarms 15-feet from every bed.”

Although regulations are state-wide, Splain says they don’t regularly inspect every house, but do conduct inspections upon request.

Marist College hosts an annual Off Campus Housing Fair during Spring Semester, where landlords come to campus to promote their rental homes to interested students. Notwithstanding, it is not too early to begin seeking off campus housing, as leases for the 2016-2017 year are being signed now.

Here are further helpful links when considering off campus housing: