Isaiah Lamb during his senior year at Dulaney High School.

Freshman Isaiah Lamb has found a home for himself at Marist College, but finding a home has not always been an easy task for him.

Isaiah Lamb and his family became homeless when Lamb was fourteen years old, shocking the young basketball player. Lamb and his family slept together in their single car, washed themselves and did other necessities at a local laundromat, and ate no more than a vending machine snack for most dinners. The lifestyle change was a very difficult experience, and it was a tough time for the Lambs, but that was life then. The family tried to adjust to the situation with one main goal in mind: to get through the experience and get back on their feet.

“I was more confused and a little angry than anything else,” Lamb said. “I wasn’t that sad or anything because I still had my family. It was more just confusion and wondering why.”

Lamb remained homeless into his junior year, and he pondered if things would ever be back to normal. However, his family remained a unit throughout the entire experience, which may have been the reason they were all able to get through the situation.

“Some people don’t really have their family when they are going through homelessness,” Lamb said. “While I didn’t have a place to stay, my mom made sure that we were always together, and we never separated.”

Despite everything in his life seeming to be subject to change, the young man was able to have one constant in his life that gave Lamb his identity. That one constant was the sport of basketball.

“Basketball was everything,” Lamb said. “Instead of staying in the car, I would go play basketball to take my mind off things. That was the whole point of basketball in the beginning, just to pass time and not worry about everything.”

Lamb became one of the best basketball players in Delaware, and that fact was what friends, classmates, and other observers

Lamb playing for Dulaney High School during his senior season.

identified Lamb as. Isaiah Lamb was a high school athlete that performed excellently on the court and in the classroom. Very few people knew how badly Lamb’s living situation was.

“Nobody knew we were homeless,” Lamb said. “We hid it very well. It wasn’t until the Sports Illustrated article came out that people knew, and by then we had already found a new home.”

Lamb’s spotlight became even larger after Ken Rodriguez and L. Jon Wertheim’s Sports Illustrated article came out about him, titled Young, Gifted, and Homeless. However Lamb had moved on from that part of his life and it no longer affected him. When Lamb was seventeen, he and his family were able to get their own home. Lamb described this day as “the best day of his life.”

“It felt as though I was normal,” Lamb said. “I could finally have friends come over and hang out. There was just a lot of excitement. My mom and dad were crying, and it was just a really great time.”

Lamb’s life was better than ever.

Then Lamb tore his ACL.

This was Lamb’s second ACL tear in two years, and it cost him a scholarship offer from his favorite school, the University of Maryland. Lamb’s top choices were now all mid-majors, one of which was Marist College.

Marist head coach, Mike Maker had told Lamb that he was the Red Foxes number one recruit before the injury and then reassured Lamb the 6’5” guard that this was still the case.

The ACL tear “didn’t affect our decision at all,” Maker said. “We felt awful for Isaiah because of the fact that it was his senior year and he had worked so hard, but we never wavered in our commitment to him.”

Lamb started to seriously consider Marist as his college destination, and that was when he finally met Marist senior captain Phil Lawrence, as Lawrence hosted Lamb on his overnight visit.

“Phil went to one of the best schools in the state, so I grew up watching him play,” Lamb said. “We knew the same people and had a lot of mutual friends, but I never actually got a chance to connect with him.” 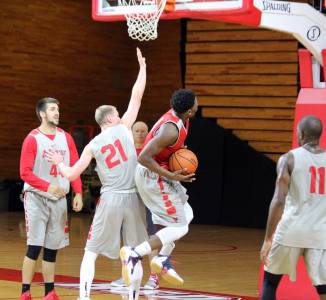 Lamb at practice earlier this season.

The two became great friends right away, and the choice became easy for Lamb: he was going to become a Red Fox.

“He’s like a little brother to me,” Lawrence said. “I took him home with me for mid-semester break, and we always hang out. I took him under my wing.”

Lamb has recovered quickly from his injury, and Maker is very impressed with his work ethic and demeanor.

“I’ve always felt like I’ve learned more from my players than they’ve learned from me,” Maker said. “Isaiah takes that to another level. He’s a positive example for everybody. It’s a great story about a family that has a lot of resilience and a young man that has made the most out of difficult circumstances.”

Lamb’s resilience has made him one of the most popular athletes at Marist College, and he even won the Marist Midnight Madness dunk contest this year as only a freshman.

“Lamb is really fun to watch and be around,” said Marist senior Frank La Sala. “I called the home opener for WMAR, and I think Lamb is going to be something special. He has a lot of potential.”

Isaiah Lamb has kept an incredible attitude, despite all of the hardships that he has gone through.

Lamb being introduced for the first time at Marist before the home opener.

Being homeless “affected me in a positive way,” Lamb said. “A lot of people go through tragedies and hurdles in their life, and they don’t always make it. I’m just grateful for what I have and proud of myself for making it through and staying strong.”

It was much bigger than basketball.