The Marist community was informed Friday morning through the Marist Alert system that an anonymous threat had been made on Twitter against the college. After Marist locked down campus and canceled classes, local Poughkeepsie police reported that a 16-year old boy from the City of Poughkeepsie had been arrested.

After the threat was deemed illegitimate, the lockdown was lifted early Friday afternoon, although classes remained canceled for the rest of the day. The campus grounds re-opened for other school-related functions.

Friday, approx. 2 a.m. – A Marist College senior, who has asked to remain nameless due to concerns over personal safety, notices the first tweet directed at Marist and alerts the Marist Office of Safety and Security.

6:01 a.m. – A second tweet is posted, this time specifically stating an intended act of violence against the college. Marist security contacts the Town of Poughkeepsie Police Department for assistance in investigating the threat.

7:06 a.m. – Marist Director of Safety and Security, John Gildard, alerts students and faculty of the threats. All classes and school-related functions are canceled until further notice. Students are advised to stay in their dorms. This alert is sent out through email, text and phone call.

7:30 a.m. – According to a source at the New York State Police, the NYSP’s school liaison officer is not made aware of the situation until a student’s mother contacts them. After receiving the phone call, the liaison officer reaches out to the Town of Poughkeepsie PD, offering all services and resources including their Computer Crimes Unit.

10:09 a.m. – A follow-up alert is sent out by Marist Security, stating that the investigation is still ongoing as officers from the Town of Poughkeepsie Police Department inspect the main campus.

12:47 p.m. – The lockdown is lifted and campus is re-opened. No threat on campus. Police remain on campus for the remainder of the day to ensure safety.

1:31 p.m. –  Students and faculty are told that classes and offices are still closed but evening events will go on as scheduled, according to Deborah DiCaprio, the Vice President and Dean of Student Affairs. 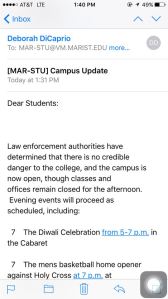 Although the campus was shut off to students and faculty during most of the day, many senior level administrators convened on campus to discuss the situation. Marist emergency response protocol is to have the president’s cabinet and other senior administration come to campus to meet and talk about strategy.

“Personally, I feel very concerned about my friends and family here at Marist,” said Summer Bourlier, the Executive Vice President of the Student Government Association. “This place is such a wonderful home to many and I can’t even comprehend why someone would want to attack that.”

For Marist students, the proximity of this threat has brought the burgeoning issue of mass shootings into new light.

“Right now the students should stay calm,” said Charlie Arbore, the Director of Safety and Security for the Student Government Association. “My personal feelings are that this has been handled in a way that has kept the campus safe, but also ignited fear. One person making anonymous online threats shuts down the campus and sequestered thousands of students in their dorms and made students afraid to be on campus.”

3:46 p.m.- Local authorities issue a report stating that a 16-year-old male resident of the City of Poughkeepsie has been taken into custody for tweeting the threats.

According to a statement they released, the threats were not credible and the suspect acted on his own.

6 p.m.- Poughkeepsie Journal reports that the suspect is 16-year-old Franklin Brink of City of Poughkeepsie, NY. Bail is set at $50,000 cash and $75,000 bond. He is charged with making a terrorist threat, which is classified as a felony. The Dutchess County District Attorney’s Office could not be reached for comment.

In the wake of Brink’s apprehension, there has been an outpouring of support from Marist students, as well as the local community.

Glad everyone at Marist is safe. No one should ever make you feel unsafe in your own home, especially a home as great as Marist.

So glad everyone at @Marist is okay and safe.

Thankful to hear that the Marist campus is back open! #Marist