After a successful season that sported three productions, including The Diary of Anne Frank, co-produced by the theatre department, the Marist College Club of Theatre Arts (MCCTA) is patting themselves on the back for a job well done. The Nelly Goletti Theatre should be quiet from this point forward.

However, the work is far from over. Though it is not common knowledge, the theatre club makes use of several storage units just up Route 9. With the additional down time comes the added responsibility of cleaning and organizing this for easier use in the coming semester.

“It’s a big job when things are left to pile up,” says Kim Kenny, the Managing Director of Technical Theatre for MCCTA. “It’s important we get it cleaned up for use in the future.”

The storage units act as a space for props and set pieces to be placed when they may be used for future productions. The cleanup was done in order to not only organize, but to dispose of any unnecessary pieces.

“One of the storage closets we have used to used by our summer theatre company,” says Jim Steinmeyer, an adjunct professor at Marist College and director the theatre program. “A lot of the stuff is garbage and can be gotten rid of entirely.”

Steinmeyer goes on to explain that it is frustrating to waste money on an extra unit when so many of the things will never be used again. 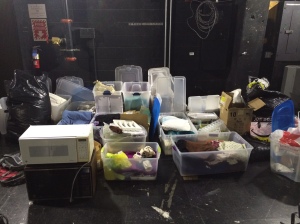 Among the pieces brought back to the theatre for permanent removal from the storage units are many household items now up for grabs among the MCCTA members.

“I encourage anyone in the club to take whatever they think they need back to their dorms,” says Steinmeyer, adding an self-admittedly premature, “Merry Christmas!”