On October 21st, students Matthew Struble and Jon Sterlacci found themselves surrounded and questioned by multiple Marist Security guards as they flew their DJI Phantom 3 drone high above the Rotunda. It was only a week later that Marist released a Use of Unmanned Aircraft Systems (Drones) Policy to be enforced starting October 29th.

SORAerial captures a picturesque shot of the Marist rotunda

“Right as we went up, capturing a great shot of the Rotunda, a security guard came outside with a walkie-talkie. Within 90 seconds, two security guards were coming towards us from Donnelly, two more from Handcock, and eventually 7-8 guards were around us, ” Struble explained. Security asked them what they were using it for and if they had permission. “We explained it was for a project, and then continued to shoot all day.”

Struble finds their ambush and the timely release of the drone policy as no coincidence. Yet, Director of Safety and Security John Gildard assured that no specific incidents on campus led to the creation of the policy, adding that many colleges around the country have issued similar regulations in the past year. “There is nothing to be afraid of” Gildard stated, “We wanted to get out in front of it, before there was a problem.” Monica Couvillion, a Marist senior expressed a fear of drones. “They sound threatening, and the presence of them on campus makes me worry about my privacy.” Struble, a proud ‘drone-er’, insists that the word ‘drone’ itself gets an undeserving negative connotation. “People associate it with drone bombings and spying when most are not much more than a toy plane.”

Security claims the main purpose of the policy is to protect the campus from physical harm. “Our first concern is safety. We can’t have these things falling out of the sky and endangering people on our campus,” stated Gildard. The policy enforces Federal Aviation Administration regulations, which classifies Drone usage into three categories: Public/Governmental, Civil Operations and Model Aircraft, meaning recreational use. According to Marist’s new policy, recreational drone usage must be approved by Safety and Security with at least 48 hours notice. “It is the latest hobby. We know that,” said Gildard, who explained that if the college knows who is using them and when, protection from liability and for the rights of the Marist Community can be better regulated. “We want to ensure they are operated reasonably.” Students are noticeably recognizing Marist’s drone policy. Since it was issued in October, Safety and Security has already received multiple requests from students for permission to fly around campus.

According to FAA regulations, “Using a device to take photos/video for compensation or sale is commercial use, which requires an FAA Sec. 333 Exemption or a Special Airworthiness Certificate.” In layman’s terms, this means that the FAA must grant approval for each specific drone used for commercial use. “Another consideration is insurance” Gildard added, “If there is going to be a commercial drone flying around campus, it must be certified by the FAA and that company is required to have insurance in the case of damages or injury.” Drones are mechanical and there is potential for malfunction or poor control, which could injure people or damage personal and/or private property of the school. As a result, Marist’s policy requires commercial usage of drones to request permission with at least 48 hours notice, have insurance and be deemed ‘Airworthy’ by the FAA. 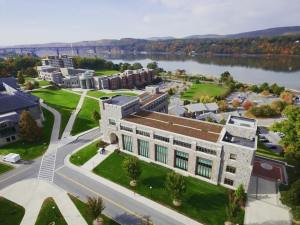 SORAerial checks out the campus from high up

However, the Office of Safety and Security recognizes the various purposes of drones and in no way hopes to strip the Marist Community from the creativity that can come from their use. It is in simply good and relevant reason to regulate commercial usage of drones, being that that they are capable of doing what people cannot: fly hundreds of feet in the air to capture the world at a new angle. Drones can have various high quality photo, video and audio features that can serve countless purposes. Companies are noticing drones to be very useful in terms of marketing and production. Even Gildard recognized this technological convenience. “Why send a worker high up to inspect a roof if you can stand on the ground and let a drone take care of it?” he bantered. Gildard noted that even Marist’s Admissions office utilized an outside company with a drone to film high quality footage of the campus last year, which is now used to attract prospective students. Christopher Gerkins, student worker from the Admissions office, confirmed this.

Struble and Sterlacci recognized drone usage as a marketing opportunity as well, one of the main reasons they went from messing around with “a poor quality, toy drone we completely beat up” to investing in an expensive drone which shoots aerial photos and HD video. “Clearly, we’re not going to be reckless” Struble insisted. In fact, their drone usage is far from juvenile. The duo could not keep their incredible footage a secret and created SORAerial, what they’re calling an “aerial media company”. “It was a small investment that we turned into a company to gain business experience. Maybe eventually we will even make some money!” Struble explained, noting that they were in the process of getting an insurance plan. “There are a ton of companies that need drone footage” Struble noted, “Why not be a specialized company that does just that?” SORAerial and their work can be found on Instagram.

SORAerial is not the only drone you might notice around campus. Freshman Joseph Pierce took to droning after a motorcycle accident left him paralyzed and bed ridden for the summer. “I knew there was never any chance at going pro after the accident so I decided to buy a drone with some of the savings I had. Whenever I got the chance, I would get dropped off at the motorcycle park and sit there and fly the drone instead.” Pierce brought his Phantom DJI 3 Professional to Marist and now takes recreational pictures locally and around campus. “I would like to do it more commercial based, and am trying to get FAA approved” He admitted. 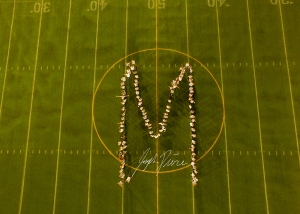 Pierce captured this moment of Marist pride in the stadium during Music Camp, August 2015

However, regarding Marist’s drone policy, Pierce does not seem to think much will change. “I feel like people will still fly their drones regardless. Its nearly impossible to catch the pilot if they’re a skilled flyer.”

For more information regarding the policy, or to request permission to use a drone, contact the Office of Safety and Security at 845.575.2282 or john.gildard@marist.edu