Ryan Clark is one of the most notable musicians at Marist College. However, his recognition does not end when he steps off of campus. Clark auditioned for the popular reality television show American Idol in 2014 and was able to impress the judges.

Music has always been his passion, but it wasn’t until recently that Clark began to view music as something even more than a passion. “One year ago I decided that this is 100% what I’m doing for my career professionally,” Clark said. “I met a producer named Frank Palangi when I was doing a show and he performed before me. He came up to me after my performance and asked me if I’d be willing to come to his studio and record a song. The whole recording experience gave me that light to be able to see my dream of being able to do music.”

Clark’s family was a big reason for his interest in auditioning for American Idol. “I’d have to say it was all due to my mom,” Clark said. “It was definitely my mom just encouraging me to try out so I looked it up online one day to find the dates that the auditions were” being held. “I also used to watch the show a lot when I was younger,” Clark said. “It was always cool seeing all these people be able to make a career out of it and get a ticket.” 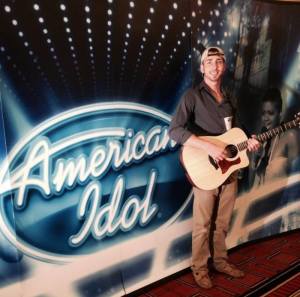 Clark’s experience with American Idol was very exciting for him, although the process was much different than viewers are led to believe. “There are multiple rounds before the actual famous judges,” Clark said. “I got there at six or seven o’clock and didn’t audition until three o’clock, so it was a really long process since there were so many people. There were thousands of people in an arena and there were a couple different booths set up with producers that basically just listened to your talent and told you if you would go through or not.”

Clark’s passion for music did not end with American Idol. “I’m going to keep doing my music career and continue to grow as an artist,” Clark said. “I think it’s important to continue to just grown and do what you love to do. Even if something may shoot you down a little bit, you just have to use that as a stepping stone.”

Clark plans on auditioning for American Idol again next year, while also continuing his music career. “I’m going to continue to release a lot of cover songs,” Clark said. “So that’s kind of my plan, just to release more music on YouTube and get more content out so that people can get to grasp who I am as an artist and kind of get to know me as a singer and a musician.”

Clark is also now working on his own original music that he is posting on his YouTube channel. On top of that, Clark has some exciting news for the future. “I am planning on going on tour after I graduate from college and will move to Los Angeles then,” Clark said. Clark certainly seems to have an exciting future ahead of him.

See more about Ryan Clark on his Facebook fan page at www.facebook.com/RyanClarkmusic or check out his videos at www.youtube.com/user/ryanclarkartist!

Brandon Fernandes is a magician by trade that ran into his fandom almost accidentally. Fernandes performs his magic tricks on his YouTube channel, but that was not always the case. “I originally filmed myself doing card tricks with the sole intention of viewing my tricks from the perspective of a bystander,” Fernandes said. “This way I can review the videos and see what I needed to work on. After a few months of recording myself I realized, ‘why not upload the videos to YouTube so that others can enjoy the tricks?’”

Fernandes began to upload his best work onto his YouTube channel, but not without a lot of hard work. “This transition required time and dedication. Whichever clip I decided to include in the final edit would be published and made available for the public to view and comment on,” Fernandes said. “Therefore, it forced me to spend a lot of time practicing the tricks for hours in order to put my best foot forward.”

Fernandes was able to see a terrific following as he continued to post his videos. “The most memorable experience was when one of my videos received over 60,000 views,” Fernandes said. “This was a huge reward for the hard work that went into producing the videos.” Since coming to Marist, Fernandes’ experience has changed quite a bit. “Unfortunately, I haven’t been able to upload any videos due to school and other responsibilities, but I still practice magic when I find the time.”

Fernandes plans on studying abroad in Portugal next semester before attending law school near his hometown of Brooklyn, New York next fall. Check out more of Fernandes’ videos at www.youtube.com/itsveryvisual!

Clancy Burke is another YouTube sensation who began her career in high school that has experienced a great amount of success. “I created a YouTube channel in 2009 where I make beauty videos, which might include makeup tutorials, hair tutorials, fashion tips, and things like that,” Burke said. “Since then, I’ve expanded it to basically anything and everything, from advice, to comedy, to random vlogs.”

Despite having a great amount of subscribers today, Burke started her YouTube career simply because she wanted to have a new hobby. “I started the videos out of boredom,” Burke said. “I have never really liked just sitting around and doing nothing or watching TV, and I really just needed something to do.”

Now, that hobby has turned Burke into an extremely recognizable person. “I have been lucky enough to have an audience who watches my videos. While it’s definitely not about the number, it certainly makes me more motivated to make videos,” Burke said. “Yesterday I actually ran into a subscriber at the Poughkeepsie Mall. It’s cool to see some of these people in person, and it makes it more real.”

Burke’s life as a YouTube sensation has made way for even more benefits than simply recognition and fame, however. “I am very comfortable with public speaking,” Burke said, “but before I started YouTube I would want to throw up at the thought of speaking in front of a bunch of people.” Burke is a broadcast journalism major here at Marist, and her YouTube life is a big reason for that. “I want to one day be a news reporter, or something like that,” Burke said, “and I never would have realized how much I love being on camera if it wasn’t for YouTube.”

Still having three more semesters at Marist College, Burke’s future remains somewhat uncertain. However, her YouTube involvement is one thing that will not change. “I will pretty much just take it day by day,” Burke said when asked what was next for her. “I’m going to keep doing what I’m doing and I don’t plan on stopping YouTube anytime soon.” The way things are going for Burke, it sure seems like things can only keep getting better.

Check out more of Clancy Burke’s videos at https://www.youtube.com/user/GlamAndGloss01!

Christian Diaz has many reasons for being a popular individual here at Marist College. One of those reasons is that Diaz was born and raised in Miami, Florida. However, Diaz has gotten many experiences that the average person would never even dream of having during their college years, mainly due to his involvement with Miami football programs.

“I started off by getting mentored by Cody Hawkins. He was an EKIN, which is essentially a Nike representative,” Diaz said. “He played quarterback in college himself, so he had many ties in the football community and introduced me to a slew of people.”

Once Diaz had his in, he used his skills to create his own company. “I got the inspiration to start my own platform called Miami Football Society, which is an innovative digital platform that features some of the top high school talent in the south Florida area,” Diaz said. “Through my work on Miami Football Society, I have been fortunate enough to help out at Nike Football’s ‘The Opening,’ which features the 150 top high school players from across the country and is held on Nike’s campus in Beaverton, Oregon.”

“One day, while I was working at a Nike football event, I was able to shoot some pictures of Antonio Brown, who was the guest NFL player in attendance because he was once wrecking the high school football scene in Miami,” Diaz said. “He then asked if I could come shoot one of his workouts while in Miami, and the rest is history.”

Diaz’ relationship with Brown did not end there, however. “After that, Antonio and I continued to build a strong

Diaz with Pittsburgh Steelers Wide Receiver Antonio Brown at the Variety Awards this past summer.

friendship,” Diaz said. “Antonio flew me out to Los Angeles to join him at the Variety Awards for when he won Male Sports Personality of the year and had me come to the ESPY’s, where he was nominated for the NFL’s Best Player.”

Now very close friends, Diaz’ relationship with Brown has given way to many other friendships that he cherishes, including Le’Veon Bell, Teddy Bridgewater, and Xavier Rhodes. Diaz has also had the pleasure of meeting many other celebrities, such as LeBron James and Jake Gyllenhaal.

On top of working with Brown, Diaz has continued his own passions. “This summer I was part of one of Gatorade’s largest marketing initiatives,” Diaz said. “I was a manager on what was called the ‘Gatorade Fuel Truck,’ where we stopped by high school’s along the east coast and taught kids about the importance of keeping their bodies hydrated.

Diaz is also one of Brown’s most-trusted marketer, and has had the privilege of creating his own clothing lines that promote Antonio Brown’s excellence.

Check out some of Chistian Diaz’ work on his Instagram page, CDiazMiami.