This school year, every single eatery on campus advertises big changes with big signs and claims. Sodexo and its different offerings have long been scrutinized by customers, but they seem to have reevaluated over the summer. While some changes improve efficiency in the food service, others are unwelcome and undetected by Marist customers.

For Sodexo management, these changes are a sign of a successful company.  “Especially with big companies like Sodexo, there is always something coming down the line,” says Michael Deluca, manager of the dining hall and food service. He explains Sodexo’s interest in “a new way of doing things, new menu items, new equipment.” 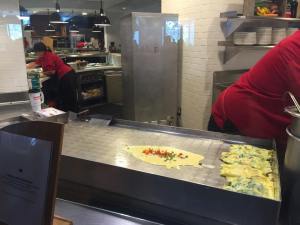 According to Deluca, most of the stations in the dining hall have undergone minor changes since students last saw them. Some are more noticeable, such as the new grain bar, and the flat top grill, which makes the omelette line more manageable.

Deluca shares that the pizza and pasta stations now serve local marinara sauce and homemade pizza dough. However, these recipe changes go relatively unnoticed unless one reads the fine print in the station signs or inquires about the puffier pizza crust.

Sodexo also expresses a newfound interest in the environment. They made the switch to MSC certified fish, grass fed beef, and stopped wasting plastic cups at the dessert station. “We are always looking to be more sustainable and efficient,” says Deluca, proudly.

While the speedy omelet line is a welcome change, a lot of students miss the earlier stages of the dining hall. “My freshman year the dining hall was so much better,” says Cassie Carroll, now a senior. She believes Sodexo used to have a lot more variety, “there was self serve ice cream with all kinds of toppings, snack stands with popcorn and unlimited chicken nuggets,” Carroll says, listing a few of the luxuries she misses.

Kelly Stiebler, also a senior, finds the new additions to the dining hall just as repetitive as the old ones. “In the past couple years they’ve added different stations, like a vegetarian station, or the international station or the pizza station,” she admits, but adds, “what I’ve noticed is that these stations are always serving the same things.”

Perhaps the most noticeable change in dining options is the menu in the Cabaret. Once listing Sandella’s flat breads, sandwiches and salads, it now has a menu of Wholy Habaneros Mexican dishes. A lot of students are in and out of the Cab every day, and they express mixed feelings about the taco bar.

Die hard Chipotle fans, such as Liam Cullen, a sophomore, are excited about the change. “I can’t get enough of it,” Liam gushes. 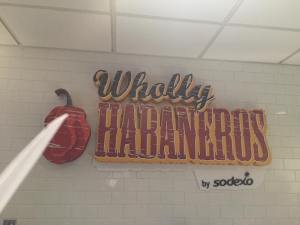 Kelly Stiebler disagrees, “rest in peace Sandella’s,” she says. She finds little variety in the Wholy Habaneros  options explaining, “you can have a taco, or a burrito, or a salad, but all with the same few ingredients.”

Brea Dyer, an employee at the cab has received negative feedback from student customers. Outside of Wholy Habaneros, she gets a lot of complaints about the revised grill menu. Dollar nuggets, a crowd favorite, is no longer on the menu, along with a number of sandwiches and fountain drinks. “People don’t seem happy,” she says, “they say they don’t have no more options.” 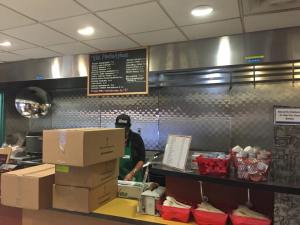 “It’s been really hard to try and stretch my budget to last the whole semester,” says Stiebler in response to the inflated prices. However, on a more positive note, the Cabaret has more variety in its breakfast menu. This now includes omelets and a full breakfast with pancakes, at relatively reasonable prices.

On the other side of campus, the Marketplace, formerly known as Jazzman’s, also started sporting this menu. Along with all day breakfast, the Marketplace now sells more bulk items and household goods, sort of like a convenience store. “Basically, outside of the name, there’s not much of a difference,” says Sodexo employee Sean Miller, of the new Jazzman’s.

“I don’t mind the new Marketplace,” says Cassie Carroll, “but none of it seems to constitute the fuss and the name change.” 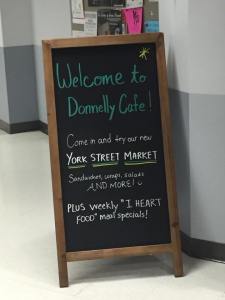 Outside the Donnelly Cafe, a sandwich board advertises the York Street Market. Photo by Sarah Gabrielli

The deli station in Donnelly has also undergone a name change, though the Donnelly Cafe appears relatively the same. The York Street Market advertises “sandwiches, wraps, salads and more,” which were all already offered last year. The only difference is that they now have weekly meal specials and a brand new sign for the same old menu.

When first asked about the changes in the cafe, Sodexo worker Emanuela replies, “there weren’t any changes.” Once she remembers the new York Street Marker, she displays the weekly specials, a grilled lemon chicken panini and chicken broccoli panini. “It’s the same menu it’s just a new board, it was redone” Emanuela explains, indicating the display, “and the prices are here.”

These minimal changes are probably for the best, since the Donnelly Cafe gets the best student reviews. The salad bar is a sort of hidden gem on campus, which most students only realize if they have a lot of classes in the building. “Donnelly has the best salad bar on campus,” raves Kelly Stiebler, who thinks a trip to Donnelly is worth it for their selection. “They’re the only place on campus that has a yogurt bar with fruit and cereal,” Stiebler adds. 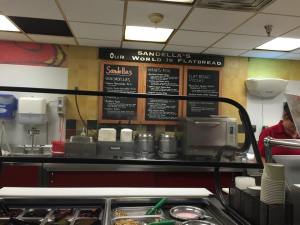 The main alteration in the Donnelly Cafe is the chalk board menu. Photo by Sarah Gabrielli

She is also pleased with the renovations in the Dyson Cafe, which upgraded from a few soups and snacks to a full hot meal section. “It has a complete panini bar and nice breakfast sandwiches,” Stiebler says, elaborating “I went yesterday and there were like six different types of paninis that you could get.”

Dyson also reorganized the checkout line so that it no longer blocks customers from getting their food. In past years, getting in and out had been chaotic, but now the line runs smoothly through the cafe. Mary Robards, an employee at the Dyson Cafe, explains that the back wall was opened up to make room for the register. “I think everyone’s happy,” she says, considering the new menu and layout. 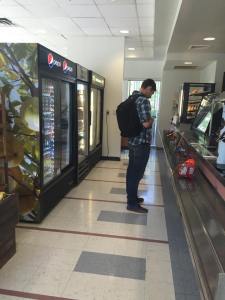 The reversed check out line at the Dyson Cafe. Photo by Sarah Gabrielli

“I don’t know why they don’t have those options in their main services like the dining hall and the Cabaret,” Stiebler says of the extensive menus in Dyson and Donnelly.

Overall, students seem to agree that salad bars are the most sought after dining on campus. “I would like a salad bar in the Marketplace,” says Cassie Carroll, who lives on that side of campus. “I think this would help us make healthier choices and would also bring in a lot more business for them,” she explains.

“I definitely don’t eat like this at home,” says Kyle-Anne Bell, when asked her opinion on Sodexo’s food, “I grew up eating very organic,” she explains. She agrees with Carroll and Stiebler, saying, “I wish they had a salad bar at the cab.”

According to Michael Deluca, Sodexo takes these needs very seriously. A lot of the changes they have already made are based on student feedback and successes at other schools. Since the school year started, Sodexo brought back the waffle bar based on student suggestion. “This is all a result of a collaboration between ourselves, the students at Marist and the Marist community,” Deluca says of the   changes thus far.