When Janie Pierson first came to Marist College, she knew right away that she wanted a career in sports broadcast journalism, specifically for a hockey team. However, she realized she would have to change many things about herself in order to get there. “I learned that at a lot of places, you’re forced to cut your hair a certain way and dress a certain way, and I was not about that,” she said. After interning with Marist Athletics during her sophomore year, Pierson realized that she enjoyed doing what Sports Information Directors do every day, which made her rethink her major. She decided to change her second concentration from broadcast journalism to public relations. Now, one year later, her dream position is to work for an NHL team in their public relations or social media department.

So why was there the shift from broadcast journalism to public relations? As Pierson indicated, as a female, she knew that she would be expected to change her appearance if she chose the broadcast route. Dr. Tim Mirabito, Assistant Professor of Sports Communication at Marist, believes that it is a strength-in-numbers mentality. “Females can get self-conscious of the broadcasting aspect,” he explained. “Sports communication in general is such a male-dominated field.” He believes that this also explains the lack of female sports communication majors at Marist.

As of October 2015, there are a total of 138 sports communication majors. According to the Marist School of Communication and the Arts, only 27 of them are females. “I suspect that the glass ceiling that exists in the industry either consciously or subconsciously provides an obstacle for women to enter into it,” Mirabito said.

Professor Leander Schaerlaeckens, a journalism professor and sports journalist, echoed similar sentiments. “I feel that it is a societal issue above all else,” he said. “There aren’t lots of women in the field and even for those who are there, they had to fight for it. For many women, that isn’t the most appealing proposition.” In his first class taught at Marist last semester, Sports Reporting, Schaerlaeckens was actually encouraged by there being seven girls in the class, which accounted for almost half of the total students. “It doesn’t translate into the industry itself, unfortunately,” he said. “There is an alarming lack of females and no real good reason for it. I don’t buy that women aren’t drawn to the field. I think it’s more that men are less inclined to hire women.”

The Sports Communication professors at Marist, who all happen to be male, make an effort to include females in class discussions without singling them out. “I try to encourage the girls in my classes that their opinions don’t matter less than the guys in the class,” Schaerlaeckens said.

Mirabito, who had a good working relationship with a female colleague back when he was a reporter, recalls his colleague emphasizing the importance of females being treated the same as males in the classroom. “I think I’ve been able to do that pretty well in my classes,” Mirabito said. “That way, it becomes more of a sports conversation above all else.”

For the female Sports Communication majors at Marist, they have already overcome several obstacles during their years in college. “It’s kind of hard not to be intimidated,” senior Amber Case said. “I am a sports fan and know a lot about my favorite sports but I was definitely afraid of getting the slightest thing wrong and being criticized for it.” Junior Sarah Parady agreed with Case, adding that one of the more difficult aspects is being underrepresented in the classes she takes. “I think that sometimes it’s hard to say exactly how you’re feeling in class especially when the class is so heavily populated with males and the topic of gender comes up,” she said.

Kyle Zwiazek, a senior Sports Communication major, estimates that there are usually about 4-5 females in his classes for every 20 guys. “The thing is, the girls usually know their stuff more,” he said. “They have to be really into it and they know that. They usually have more knowledge overall than males and it’s vast, not just limited to one sport.” 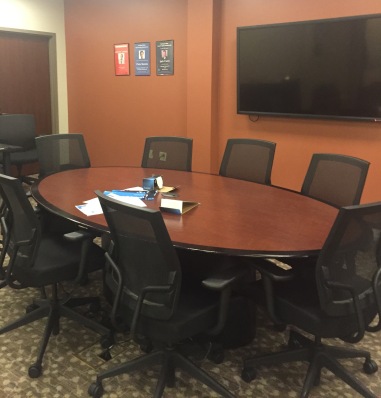 The Center for Sports Communication, where many Sports Comm majors and interns can meet and collaborate on projects.

While there are not many in their classes, the professors of Sports Communication at Marist all agree that the females in their classes have notable qualities about themselves. “In my experience, the females tend to be quieter but better grade-wise and much more mature,” Director of the Center for Sports Communication Keith Strudler said. However, Mirabito’s observations vary a bit. “The successful ones that I have taught have all been assertive and possess enough confidence to try to break through barriers,” he said. “They have all had intrinsic ties to sports one way or another.” Schaerlaeckens believes that the females he teaches provide a more diverse and overall better classroom environment. “They are all diligent and know their stuff,” he added.

Shannon Roper, Dean of the School of Communications, feels that the representation of female Sports Communication majors has improved over the years. She noted, however, the similar gender disparity for the public relations classes at Marist, which strongly lacks males. “It’s like a pendulum when it comes to those two concentrations,” she said.

Schaerlaeckens speculates that more females in the sports communication industry shift more towards public relations than males because there are more jobs available for them rather than in the journalistic part of the industry. Strudler agreed, adding that it is about role models and where the success is for women. However, he noted that not enough want to be on the media side as a result. “Too many want to be sideline reporters when they could be writers or actual announcers instead,” he said. Nonetheless, Strudler emphasizes that in time, there will be more female representation in the sports communication world and as a result, there will inevitably be more females enrolled in sports communication classes at Marist.

Despite the lack of representation in the classroom, many female Sports Communication majors are still positive about their experiences at Marist and for the future. “I’ve never been in a particular situation where I’ve felt like I have to prove myself,” Case said. “I just do my work and let the results do the talking. I think it’s exciting to think that we could be a part of the generation that finally jumps all the hurdles that face females in the sports world.”

Case, Parady, and Pierson all agree that the best part of their major is being able to prove males wrong about their knowledge of sports, along with having teachers that make them feel comfortable in the classroom. “I’ve never felt as though my gender has held me back,” Pierson said.