Many have come to associate October as the month of Halloween. The beloved holiday falls on October 31st and the weeks leading up to it have often been dedicated to finding the perfect costume, partaking in other fall activities such as apple and pumpkin picking, but, perhaps most importantly, haunted houses.

The Hudson Valley is well known throughout the nation as one of the haunt capitals of the United States. Aside from the well-known Headless Horseman Hayride, there is another attraction in nearby Wappinger’s Falls that people may not have heard of. Kevin McCurdy’s Haunted Mansion provides a variety of frights that many may not be expecting.

“I went last year and I could not be more excited to go again,” says Michael Parisi, a senior at Marist College. Parisi’s experience at the Haunted Mansion was surely something he wants to experience again.

The attraction is currently celebrating its 39th year in business and boasts the track record of having new attractions each year.

Kevin McCurdy, the founder of this haunted house and the co-owner of Imaginarts Studios, conceived the idea when he was only fifteen years old along with his father. “I had an interest in theatre, magic, and monsters,” he says.

Luckily for him, McCurdy found a way to combine all of these interests and create something fun and unique that has people returning year after year.

“He’s a huge name in the haunt industry,” says Holly Dillon, the co-owner of Imaginarts Studios. “He’s a bit modest, but he’s really revolutionized it here in the Hudson Valley.”

However, the simplistic fun of being scared isn’t the only thing that has people returning through the years. One of the biggest draws of the Haunted Mansion is that people never know what to expect. 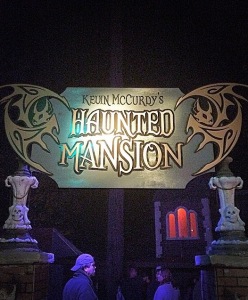 “There was a haunted house, a zombie trail, and then a haunted London section,” Parisi explains about his experience the previous year.

According to McCurdy, most of this will be changed this coming year. Zombies will be swapped out for vampires while the London theme will be exchanged for a unique storyline where haunted house goers will be asked to hunt down a vampire that has been infecting a town.

“This year we are going to be returning to our interactive roots,” McCurdy says. “It’s live theatre in a sense.”

Indeed, the actors involved are ones that have to think on their feet to accommodate the needs and reactions of a wide variety of guests. In addition to a Scare School that preps actors for any and all situations they may face inside the attraction, the Haunted Mansion takes about six months of prep time leading up to opening.

As far as ideas are concerned, it takes a lot to be able to come up with fresh themes each year to keep the public interested.

“It could be anything from stories we hear or even just going to the movies,” McCurdy says about how the creative team develops their ideas.

Above all else, the attraction needs to entertain guests. “Each crowd has a different reason for why they’re there,” says Dillon. According to Parisi, they do their job well.

“I love being scared,” says Parisi. “But it also was a lot of fun. I could see high school kids and even younger going in there and having a blast.”

Kevin McCurdy’s Haunted Mansion just opened this past weekend and will continue to be open every Friday, Saturday, and Sunday until November.

“I’m not missing it!” says an excited Parisi.