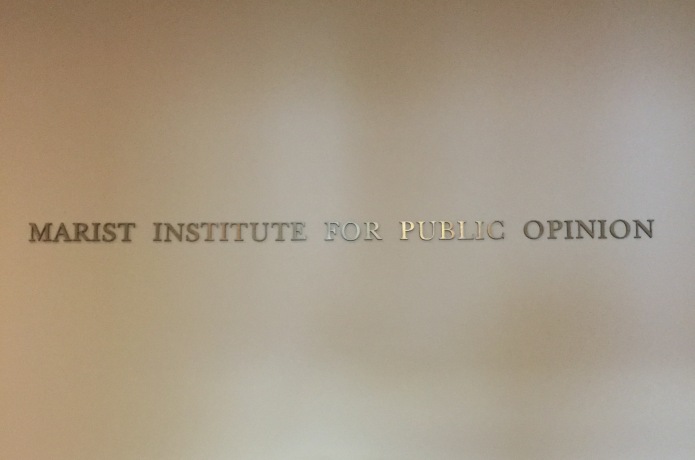 Since 1978, the Marist Institute for Public Opinion has been a fixture on the Marist College campus. Started by Dr. Lee Miringoff as a way to teach his political science class about voting behavior, it has evolved into a national opinion poll, covering an array of issues ranging from politics to sports to technology and beyond. Known as the Marist Poll around campus, the organization works year-round, employing students as their survey research interviewers.

The Marist Poll grows especially busy during election season and Dr. Miringoff believes that there are a number of reasons for why they have become so successful during these specific times. “There are several aspects which contribute to our success,” he said. “First, we always use the most scientific, rigorous methods in conducting our surveys, including live interviews speaking to people on landlines and cell phones. Second, we are fully transparent in releasing our methods and results. Third, our secret sauce is the Marist students who do an excellent job conducting interviews and supervising in the phone center.”

New surveys are developed each week as the Marist Poll has media partners in both NBC News and the Wall Street Journal for state polls and the McClatchy News Service for national polls. Since the last election cycle back in 2011-2012, the Marist Poll has grown significantly by adding MSNBC/Telemundo to conduct polls of special concern to Latinos and the PBS NewsHour with Gwen Ifill and Judy Woodruff. To expand their array of topics into the sports world, the Marist Poll has also begun polling with HBO’s Real Sports with Bryant Gumbel. To add fashion into the mix, the Poll also joined forces with Marist’s Fashion Design program to present the results of a survey on issues relating to fashion at Fashion Week in New York City. In terms of growth on a political level, the Marist Poll has conducted a series of seminars over the past few years. Some were on campus while two were in New York City and one took place in Washington D.C., all on topics of national electoral concern. The forums have involved top journalists and were presented to current Marist students, Marist alums, and friends of the College.

Mike Conte, the Assistant Director of Survey Center and Data Management, enjoys having a variety of media partners, especially during election time. “It helps the Marist Poll get national attention, especially when national elections are involved,” Conte said. He feels that the atmosphere at the Institute gets busier. “It’s a lot more hectic but you’ll see our name out there a lot more,” he said. “It’s like our version of the playoffs. All of our best guys are out there giving it all they got.” He finds polls exciting, as it provides a sneak peek into what is in store for the country and finds pride in seeing MIPO’s work on display. “Polls represent public opinion,” Conte added. “They are the voice of democracy, and that is what makes them so important.”

The main headquarters of the Marist Institute for Public Opinion

MIPO is often in the same conversations as the Quinnipiac University polls and Gallup polls. However, Conte argues that there is a significant difference that sets the Marist Poll apart from them. “It’s definitely the student factor, as we were the first college-based survey,” he said. “We work hard to maintain our independence from other research organizations through providing classes on campus for students to understand the media and statistical side. We try to make the Marist Poll an educational program above all else.”

Many students enjoy their time as employees of the Marist Poll, especially at such a crucial time. Catherine Vaccaro, a recent Marist College graduate and former MIPO coach, reflects on her time at the Poll with nothing but high regard as she enjoyed hearing opinions from people all over the country. “When there’s a big election going on, it’s always an interesting time at Marist Poll,” she said. “You really get a behind the scenes look of the election and get a look at what society really thinks about the candidates. As a coach when it’s super busy, you really need to keep the other interviewers motivated to keep getting results. So, I thought it was pretty rewarding to see our results on national news channels cause it shows our hard work paying off in the real world.”

Autumn Kish, a junior at Marist and current coach for the Marist Poll, enjoys working at the survey center for similar reasons. “It’s a good experience that meshes well with my political science major,” she said. “I really enjoy learning what’s going on around the country and seeing where people stand.”

Gabrielle DeRario, also a junior at Marist and an interviewer at the Poll, agrees with Kish that it is important to see where people stand on important issues. “If we don’t hear from a good majority of people, there will be no impact of all of the work that we accomplish,” she said. “It’s important for everyone’s voices to be heard, no matter how much they differ from our own personal beliefs.”

Several of the supervisors agree that working at the Marist Poll is an excellent resume builder and exposes the students to the political world for the first time. They gain persuasive and communication skills and learn how to maintain their professionalism in the face of opposition. Such is the case of Meghan Nosal.

Nosal, a junior at Marist, has just begun working at the Marist Poll and there are a few things that she is still struggling to adjust to. “Probably one of my biggest struggles is having to keep my mouth shut when I finally get someone to talk to me,” she said. “I’m pretty outspoken about my opinions on politics and social issues so when someone says something I don’t agree with, I really want to ask them my own personal questions and share my personal opinions.”

The Marist Poll strives to maintain their integrity and prevent the type of bias that Nosal brought up. Interviewers must always stick to their script and maintain composure when it comes to dealing with difficult interviewees. This ensures that all of the collected data is as accurate as possible, in order to preserve the reputation of the Marist Poll with the general public and the media. When it came time for the first two GOP debates, the Marist Poll’s integrity was put to the test. MIPO decided to conduct their surveys without asking the head-to-head questions that would have been used in determining debate eligibility.

One of Dr. Miringoff’s consistent arguments is that national polls should not be used to determine debate criteria due to the margin of error that can be involved. Back in May 2015, Miringoff even released a list on the MIPO website naming the top ten reasons why polls should not be used to determine eligibility for debates. “We felt very strongly that given the fact that all polls are estimates with a margin of error that to exclude candidates based on decimal point differences did not make sense,” Dr. Miringoff explained. “This was shown to be right when CNN altered its rules to make sure that Carly Fiorina would qualify for the second debate.” He felt that candidates were altering their behavior and strategy to create attention to score higher in the polls so that they would qualify for the debate. “This is all backwards,” he said. “The polls should be measuring public support, not creating the atmosphere they did.”