Students at Rowan University in Glassboro, New Jersey, found themselves caught in a fierce rainstorm last Thursday, September 10, as torrential downpour flooded the area. The National Weather Service issued flash flood warnings throughout the area until approximately 8 pm but for some students that did not see the alert, the night got ugly. They were caught in the storm on the road. 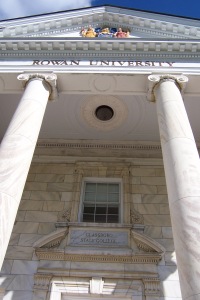 For Maeve Forde, a junior at Rowan, the weather forced her to pull over on the side of the road and wait it out. “It was nearly impossible to see,” she said. “I started hydroplaning and I knew right away that I needed to get off the road.” Forde had to wait nearly 40 minutes until conditions were safe and she felt comfortable enough to drive again. Her older sister, Margaret, on the other hand, who is a Rowan senior, took a more cautious approach and avoided driving altogether that day. “Even before they sent out weather alerts, I could see that we were in for a big storm,” Margaret said. “I don’t know why some people decided it was a good idea to test Mother Nature.” Margaret elected to stay in and watch the storm from the confines of her dorm room. She described the scene outside as something almost “apocalyptic.”

Roommates Derek Sierant and Leo Gardner did not fare much better during their ride back to campus. The two were lucky enough, however, to find refuge in a convenience store off the side of the road. “From the car to the store was about 10 feet and yet I was fully drenched by the time I got inside,” Sierant said. “It looked like I took a shower with my clothes on.” Gardner’s appearance was the same as his roommate’s. “When we got inside the store, there was about half a dozen other people inside with the same idea as us to wait out the storm,” Gardner said. “I mean, I get that most of us got weather alerts and the school gave us a heads-up too but I don’t think anyone really realized how serious the storm was actually going to be and how much it was going to flood.”

Meanwhile, Rowan students back on campus found themselves essentially trapped in their dorms unless they decided to trek through ankle deep water. Students parked in certain areas on campus were notified by the university to move their cars as Rowan Boulevard took in nearly a foot of floodwater. This is a significant increase in comparison to the total rainfall for the month of August that Gloucester County received. According to NJ.com, Gloucester County recorded only between 1 to 3 inches of rainfall all of last month.

Justin Williams, a junior at Rowan, did not think that the storm was as serious as many people made it out to be. “I have lived in New Jersey for literally my entire my life,” he said. “I’m used to it raining a lot. I kept seeing people on Twitter saying they were going to build an ark like Noah and start rowing to class and I just kept thinking ‘You are all being a little too dramatic, don’t you think?’ But that is just my opinion.” Williams used the storm as an excuse to stay inside his room and get caught up on homework and studying. He found the storm to be more of an inconvenience than anything else but still found a way to use it to his advantage. As for Rowan University, classes have continued and most of the students have already forgotten about the “Great Flood of 2015.”