In the last two months out here in the Hudson Valley, it seems like we have not seen the rain in forever. 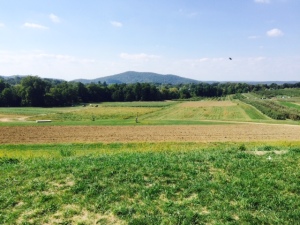 The ground over at Fishkill Farms in Hopewell Junction

While the drought out here does not appear to be as abysmal as in California, it has still been a burden for many, namely farmers. We reached out to local farmers in the area to see if they could weigh in on this recent weather phenomenon, and while all of them seem to be keeping their crops alive in spite of the lack of rain, most admit that (to quote Luke Bryan) rain is a good thing.

Many farmers are irrigating their land using various methods to keep their regular crops alive. Beth Dykeman, who runs Dykeman Farm in Pawling along with her husband Wright, describes how they irrigated their land every month this year using irrigating ponds that were installed by Wright’s father. “They help because you don’t have to worry about wells,” she explains. She added that she leaves all the irrigating to her husband, who typically starts around 6:00 a.m. and goes until 7:00 or 8:00 p.m.

Amongst the many kinds of crops that are grown at Dykeman Farm, the sweet corn appears to be getting the most tender, loving care according to the farm co-owner. “It gets watered four times a day!” she exclaims. She doesn’t believe that the crops turn out any differently because of the irrigation, but “rain does a much better job than we can at irrigating. You have to irrigate or your production is going to be down.”

Norman Grieg, owner of Grieg Farm in Red Hook, says of irrigation methods: “It’s effective, [but] it’s just a slower way to get water on the ground.”

Ray McEnroe, who runs the McEnroe Organic Farm in Millerton alongside his brother Eric, uses an overhead wheel for the purposes of irrigation on his farmland, but says that the “lack of rain has certainly affected [the farm’s] crops.” “I don’t plan on growing things much larger than September 20,” he claims.

Over at Tantillo’s Farm in Gardiner, co-owner Beverly Tantillo has not had the best luck with her farm’s irrigation system. “Our irrigation system needs work,” she claims matter-of-factly. “Our veggies and apples need the most work.” Still, business has not slowed down one bit at this farm. “We sell out by morning [each day], no problem,” she says. “We have been extremely busy lately.”

In fact, business has generally been great across the board for each of the local farms out here in the Hudson Valley. Many farmers do not believe that the drought has affected the sale of their products, even though it has clearly affected production.

Jay Armour of Four Winds Farm in Gardiner believes that while the record heat this year did not cause a downturn in business for their products, he says that it is a far cry from when the farm had their best business year last year, calling it “an exceptional year.” He chalks that up to the fact that last year’s summer was far milder than most, which allowed for more people to come out to buy some of the products being sold each weekend since the temperature “never really got up to the 90s.”

During Cody Creek Farm’s first year on the farmer’s market circuit, farmers have been feeling the pressure to churn out sufficient supply as a drought-fueled summer season comes to a close. “We have been using overhead sprinklers so far,” says Vivian Beatrice, who’s new to the farm. “We’re looking to get a drip installed at some point, but that might not come into play until next year.”

Still, Beatrice is thankful that what has been happening out in the Hudson Valley is nothing like the extreme drought in California. “I’m not sure if you know what’s going on in California,” she remarks, “but there is no real mechanism for checking irrigation in California. People there are relying on fracking water to grow their crops and there are no real background checks to see what’s in the water.”

The farmers out in the Hudson Valley continue to hold on, thankful that summer is coming to end and grateful that the area does not have it as badly as out west.