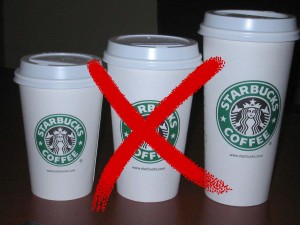 Three Starbucks cups with a big X through the middle one.

Poughkeepsie, N.Y. –  Many people believe America runs on coffee. And for some people it does to the extent that they cannot live without it. Even astronauts who desire coffee, but work in space will be able to rejoice with a nice hot cup of Joe as an Italian coffee company Lavazza with help from an engineering company has created the ISSpresso machine, which will provide genuine Italian espresso for them on the International Space Station.

This speculation of America’s obsession with coffee is fueled by active market research too. The National Coffee Association (NCA), which is a marketing research/ lobby group for the coffee industry says that approximately 41% of every day coffee drinkers are between the ages of 18-24, the second largest age percentage behind the 63% between the ages 25-39.

Yet in total the 2013 NCA study found over 83 percent of U.S. adults drink coffee. Keep in mind those may be the people have drank coffee once in their lives, but still almost give credence to the slogan that we run on coffee.

And you would believe that many college students would drink coffee too. Usually when the Fall semester is coming to a close, many students will be studying for long hours in the Library or Donnelly Computer Lab for their final exams with Starbucks or Dunkin Donut’s coffee by their side. Yet, not everyone partakes in the ritual of staying up late with their Grande Mocha Latte or their black coffee. Some seldom or never drink coffee at all.

Why Not Drink Coffee?

What about the other 17 percent? Why not drink coffee? Why defy the all famous Dunkin Donut’s slogan “America runs on Dunkin.” There are several reasons to do so.

Ariana McCumber a Senior/Executive Assistant of Student Government says “Every time I’ve tried it, I just haven’t liked the taste of it.” She added she has tried so many different types of coffee from black coffee to Frappuccino’s, but in her opinion none of them taste good. Neither has the sugar/sweeteners which is supposed to help people enjoy their drinks has helped. Although when asked what she would order from Starbucks, does enjoy one drink on the menu. Ironically, she will always order the Vanilla Bean Frappuccino which she explains “is basically ice cream; if there is coffee in it, I don’t taste it all.”

Another student who is not keen to coffee is Ryan Kiggins a Junior/Resident Senator of Student Government at the college. He explains that he does want to dependent on coffee in order too feel good. In fact he says he knows “a few people it’s not really a big deal, but it’s like a drug (to them) and it’s like there addicted in the sense that they’ll get headaches.” That is not appealing in the least to Ryan.

He added his grievances about coffee.

“very rarely I will drink coffee but I don’t drink it because I drink a lot of it, more than a cup, I will get really jittery and freak out and other times I will get really sleepy and want to got sleep right after.  So also doesn’t seem to be consistent.”

Ryan may have a point. In a report from Quentin Regestein and Avram Goldstein of Harvard’s Brigham and Women’s Hospital, they found coffee is like any other drug in that withdrawals or

“…interruption in the caffeine supply can have severe and debilitating side effects: violent headaches, uncombatable drowsiness, and frequently depression.”

Also ironically as people do associate coffee with giving them that extra boost to study, it may lead to a perpetual dependence on coffee.

“…[Goldstein] found that people who drank coffee generally described themselves as sleepy in the mornings. That could be why they drink coffee, of course, but in fact what we find here is that when people stop using coffee, morning sleepiness doesn’t get worse, it goes away.”

So there is actually correlation between sleepiness and coffee consumption.  The article later explains that this our bodies natural reaction to coffee. So it becomes a natural cycle where each and every morning we wake up tired and drink coffee.

In a USA Today article based on the findings of the Journal of Mayo Clinical Proceedings, over consumption of coffee was found to possibly have a long term impact on men and women.

According to the clinic, men younger than 55 who drank more than 28 cups of coffee a week (four cups a day) were 56% more likely to have died from any cause. Of course one has to keep in mind that at Marist for the most part if a student was probably drinking this much coffee he/she is probably only doing so for the arrival of final week.  Perhaps miderms week may cause a few to do the same too.

However, the same clinic also cited a 2012 study that coffee drinkers between the ages 50-71 have a lower risk of death than those in the same age bracket who did not consume coffee.

Not a serious problem?

There’s no-one better to talk to about coffee than Coffee aficionado at Marist College Professor in Journalism Kevin Lerner. Learner an avid drinker  jokingly remarked that “It’s basically constant like an IV Drip.”

He admits at one time would get headaches if he wouldn’t drink coffee but not much anymore.

He described it not as a like a physical addiction but just “something to do.” It give him a chance to take break from his professor work.

Although he did compare coffee drinking to when people quit smoking because in both cases neither no what to do with their hands anymore.

What are the alternatives for studying and other stay up later purposes?

No one has to rely on coffee to get work done. Anytime Ryan knows he will be working late it the evening as many college students tend to do during the end of the semester, he will take advantage of napping during the day time.

He added that he will drink a Red Bull, but only on his ride home. Since Ryan is from Syracuse N.Y, he needs it for the three and half our commuter because he definitely does not want to fall asleep on the wheel. Although he did add Red Bull in itself is gross.

Ariana said she would usually consume a soda, Gatorade or a popsicle. Although if extremely tired she would surrender to her desire to sleep because it’s good for you.

Lerner added that espresso is much better for you considering it has less of caffeine content than the typical coffee glass. Thus, you are less likely to get a headache unlike from coffee.

Many have suggested drinking tea as an alternative. Besides having less caffeine than coffee, Tea’s such as Green  have many benefits in antioxidants. According to WebMD, It could also help reduce certain cancers bladder, breast, lung, stomach, pancreatic, and colorectal cancers and reduce neogrolic disorders like Alzheimer’s and Parkinson’s.

And it has already penetrated numerous households across the United States. According to the U.S. Tea Association in 2014 about 80 percent of U.S. households have tea in their kitchens, and more than half of the American populace drinks tea on a daily basis.

I will usually have a cup or two of coffee from the Keurig. Yet, I will also occasionally partake in Diet Half Lemonade-Half ice Tea Snapple. Both in my opinion are enjoyable for consumption. Of course I drink neither neither in excess though.