What better way to prove yourself to the film industry then to make your own feature length horror film.  Thats what exactly what film Marist Students Alaejandro Lazare, Patrick Mullen, Becky Losito and Tim Croteau are doing.

The film titled “The Forgotten” is about a young kid looking into an abandon hospital, trying to figure out what his father use to do in there, before he is kidnapped and things go horribly wrong. 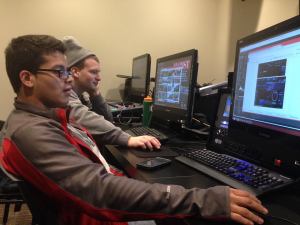 Alejandro and Patrick hard at work

One may think the film would use Marist students as actors, but that was not the case.  The only Marist students were the directors/ assistants as the rest of the team were full-time actors from New York City.

Yet how were they able to pay the cast?

Mullen, The Director of the film was fortunate enough that his dad knew the main donor for the Woodstock film festival.  He generously donated 5,000 dollars for the projects.

He told the crew to “Consider (The Donor) me the Angel Donor.”

Of course connections were not alone to get the donations.  They showed the donor all the 12 major documents how their going to film, where they will film and their budget.

And the results look terrific.  Makeup and film all look professionally done.  They were almost able to stay in budget, but transportation for the actors was just too much for them to stay on track.

They will be submitting the film to many upcoming film festivals.