When Marist first successfully transitioned their sports programs to the Division I level in 1981, total student enrollment hovered around 2,000 students, the then-McCann Center was four years old, and a young executive named Dennis Murray prepared himself to begin his third year as President of the up and coming college. Yet of the many sports teams the Marist Athletic Department prepared in response to the new competitive landscape, a focus was placed on the men’s basketball program.

In order to actively contend for the championship in what was then a very competitive league, the Marist men’s basketball coaching staff had to become creative in their pursuit for talent. Led by head coach Mike Perry, the coaching staff was one of the first college programs in NCAA history to recruit international players. By the 1984 season, the roster featured six players who were not American.

“Of course everyone remembers Rik Smits since he was the number two pick in the draft but I’m telling you, we all forget about Peter Krasovec; a lights out shooter from the three-point!” said Kevin Callaghan, an ’86 graduate of Marist and current Information Technology professor in the School of Computer Science and Mathematics. The young team would rise to prominence in a key game against the eventual 1985 national champions, the Villanova Wildcats. 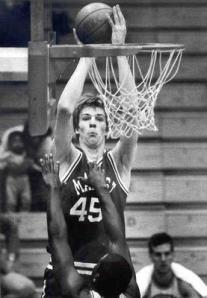 “I’ll never forget,” says Callaghan, “the McCann Center was fully packed as we battled against that team. We almost had ’em too!” Although Smits and the Red Foxes would lose to Villanova 57-51 that year, their ability to put up a strong fight against the best team in the nation gave them some notoriety.

Building off of a winning season where the team would earn its first Eastern College Athletic Conference (ECAC) Championship in 1985, the Red Foxes would continue their success in 1986 and 1987 with appearances in the NCAA Tournament. “It wasn’t just the students who were involved either. The local Poughkeepsie community used to come out to support our boys,” said present Director of Athletics Tim Murray, who was a coaching assistant at the time. “There was a time where the McCann Center was sold out week after week. If you weren’t a student, it was very difficult to get a ticket.”

Matt Furjanic was the coach of the men’s team from 1984 to 1986 and led the team to its first appearance in the 1986 NCAA Tournament where the Red Foxes squared off against a Georgia Tech Yellow Jacket team that would eventually send four members of its starting lineup to the NBA. “We knew we had a great team, it was very exiciting,” says Furjanic, now the head coach of the men’s basketball team at Polk State College in Lakeland, Florida. “Rik was a great kid to coach, and if he hadn’t of racked up all those early fouls in that one tournament game, I think we could’ve pulled it off.” The Red Foxes would fall to the Yellow Jackets in the first round 53-68 but the post season momentum would carry over into the following year. 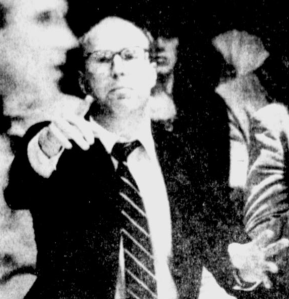 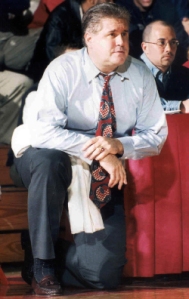 Furjanic would leave after the 1986 season and Dave Magarity, a coach with experience at St. Francis and Iona, would take over as head coach. “Magarity was great,” says Murray. “Really enthusiastic and kept the team on track all year with one goal in mind: returning to the NCAA Tournament.”

The 1987 season would yet again be a fantastic year for the Red Foxes as they battled their way to win a school-record 20 games, which earned the rookie coach Magarity the ECAC Metro Coach of the Year Award. Smits and a young guard named Drafton Davis would lead their team to another NCAA tournament appearance against an impressive Pittsburgh Panthers team that featured future NBA players Charles Smith and Jerome Lane (who’s famous for this clip). The Red Foxes would lose yet again in the first round to the Panthers 68-93. Though the loss ended the Red Foxes season rather than go to the draft, Smits had agreed to return for his senior year and thus hope for another NCAA Tournament appearance in 1988 was salvaged. Yet the drama that in the would unfold in the upcoming months would mark an end to the Red Foxes’ NCAA Tournament runs in the 1980s.

The success of the 1986 and 1987 seasons had overshadowed a prolonged NCAA investigation into the 1984 recruitment tactics of then coach Mike Perry. “It was really unfortunate what happened. Perry was a guy who had never a in a Division I league and so he didn’t really have an understanding of the rules and regulations that govern recruitment strategies.” says Murray, who described Perry as ‘a bit of a lose-cannon’.

In 1984, a few months after Marist had first hired Perry, the school had learned that he had committed NCAA violations which caused them to self-report the incident to the NCAA, and requested Perry’s resignation as coach before he ever set out on the court. Perry cooperated and apologized for committing any offenses against the NCAA. The specific nature of the violations remain unclear but it had something to do with the methodology in attracting and maintaing interest from international talent. Despite the fact that Marist had attempted to rectify itself by firing Perry, the NCAA continued with its investigation and eventually ruled in 1987 that Marist was banned from NCAA Tournament play for two years, making the 1988 team irrelevant in collegiate athletics.

More than a quarter century since the NCAA ban, the Red Foxes have yet to make it back to the NCAA Tournament. Yet in ignoring the bitter end of the 1980s men’s basketball teams, pride in what the players accomplished is still shown. “We keep all the photos, awards, and news clips in the back of the McCann Arena near the men’s locker rooms to remind the players of where their team has been,” says Murray. “Hopefully it will encourage them to return to the tournament one day.”