In the wake of a disappointing season f

or Marist’s football team, there is still one light that shines bright. Caylin Moore surpassed the odds of growing up with family and domestic problems in Los Angeles, CA to become a recipient of the Fulbright Award Scholarship and do something that no other Marist undergraduate student has ever done.

His past may be dark and scary, but his future is bright. Moore has beaten the odds of getting off the tough streets of Los Angeles, and going to a prestigious college. With a football scholarship, he majors in business with a degree in economics. At first glance, everything might seem smooth and joyful for Moore on the outside, but what his past holds is anything but that. People who don’t know what he has been through might think he’s your typical student athlete, but the obstacles he’s had to face will change anyone’s perspective on him completely. “Caylin has been through a lot and he is a soldier,” Jim Parady, coach of the Marist football team said. Parady said how he really researched Moore and recruited him for being a great athlete, and most importantly, a good human being.

When he was in fourth grade, Moore’s mother was sexually assaulted after having heart surgery. She fell into a clinical depression afterward. “She was bed ridden for a span of like two or three months,” he said when explaining the story. “I pulled her off the couch and sat her down in the bathtub. I then told her to wash her hair which I thought could help her. That little encouragement that she needed went a long way.” After this happened, Mrs. Moore started feeling better and knew she needed to get back on her feet for her kids’ sake.

His roller coaster of a past does not end there. When Moore was in first grade his mother left his father. When he described his father he said, “I remember back in the day he was a very violent man.” During high school, Caylin’s father shot his live-in girlfriend and is currently awaiting trial for murder. When I asked him what would be said between him and his father if he went to go see him now he said, “There would be no words of encouragement from him because you practice what you preach.”

Moore certainly does practice what he preaches. Since his days in high school, he has maintained a very high GPA. James Dirk, Moore’s high school football coach at Verbum Dei, said about him as a young kid, “With being all that he’s been through, to be able to sit steady, keep that high GPA, and be focused just like he is; I have nothing but praise for him.”
Moore knows the positive image he possesses and wants others to buy into his routine. When Moore commented on the work ethic he tries to maintain, he said, “The structure of your lifestyle teaches you hard work and gives you confidence in yourself, which will lead you to have the power to help others.”

This work ethic and mind frame he upholds was the driving force behind him being considered a recipient of the Fulbright Summer Institute Scholarship. Moore is the first ever Marist 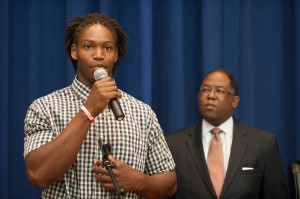 undergraduate to receive this prestigious opportunity. This program sponsors U.S. and foreign participants for exchanges in all areas of work. This includes sciences, business, public service, government, and the arts. The U.S Department of States funds the Fulbright program and supports student exchanges with 155 countries around the world.

Since his freshman year at Marist College, Moore has maintained a 3.7 GPA or higher each semester. On top of his exemplary grades, he has been in works with doing community service once a week all around the Hudson Valley Region. Marist assistant football coach, Jake Dembow, said, “Caylin is one of few guys on our team that volunteer to do community service. Once a week we will go out in the community, either to elderly homes, orphanages, or homeless shelters to give back to the society that supports us.” Moore even has time to play a pivotal role in Marist’s campus ministry.

Valerie Schreiner of the Fulbright Commission Board commented on what set Moore out from the other recipients around the country. She said, “His exemplary grades were a small part of this process. We learned about his background and what he does for the community around him. He was a very impressive young man who has very high aspirations. We knew it would be a great experience for Caylin and a great experience for people who he influences.”

Being awarded the Fulbright Summer Institute Scholarship, this meant Moore can pick to travel to any school around the world. He chose to study for a month at the University of Bristol, in Bristol, England. The program was centered around studying the transatlantic slave trade. Moore said, “I learned a lot about the British culture, the transatlantic slave trade, and more specifically a great deal about systematic oppression of minorities in the United States.”

A big influence on Moore was what happened outside of the classroom. As a kid who has never traveled outside of California before college, he got to experience a society outside of his norm. He lived at Stoke Bishops Hall at The University of Bristol with British students, accents and all. He met a member of British Parliament named Stephen Williams. He went on an archaeological dig at the Berkely Castle, and visited the Roman Bath’s in the City of Bath, England. He even gave a thesis presentation on systematic oppression and continuity after slavery and emancipation.

Moore may have some very dark experiences in life, but his month in the United Kingdom has left him with knowledge that could never be forgotten. He learned a lot through this experience. He said, “I learned two very big things during this whole process: what one is capable of with God and hard work, and the incredible power and impact of education in one’s life if you’re given the opportunity.”

After Moore explained his experience and how it had impacted him so powerfully, I asked where he sees himself in five years. He paused for a few seconds and said, “You know, to be honest, I would rather show you than tell you. I’m one of those show-you type of guys. I dream dreams that are so big, so unfathomable, so unrealistic that they are destined to fail without divine intervention. An example of that is me playing college football. Coming from where I came from, that’s a far off dream. For some people, I am the only person they know who went to college. Another example is the opportunity for me to study with the Fulbright Commission Summer Institute. These things are not something most people from my African American, impoverished community even dare to dream.”

Moore’s experience is one that put Marist on a prestigious list. The knowledge he gained will continue to influence himself and the people around him. His final touch of wisdom came when I asked him what his aspirations are when he finishes his degree here at Marist College. He said, “I want to be great.”