Have you ever seen a 21 year old college student run around a store like a kid in a candy shop? No.  Then the odds are you have not heard or been to Half Time beverages. Located South of Road 9 about seven miles from Marist college, it’s enough of a distance where Marist students may not know about it, but it’s not far enough to deter anyone with a car from going, especially after the many delicious drinks that await.

When you walk into Half Time you will be at awe of all the shelves full with nothing but a wide assortment of beer. Yes they only sell beer, but they are clearly not lacking in it. In fact, Half Time boasts having the “world’s largest selection of beer.” While going inside it’s hard to argue against that remark. You can find so many beers from microbreweries in the U.S. as well like Germany, Belgium and the United Kingdom that surely even a beer aficionado could not walk in without finding some beer he has yet to try. Or he could find beers he can hardly find anywhere else. Although once inside any beer is easy to find. Once entering the star you will see each aisle is labeled by the beers country of origin, so it won’t take long at all to find a beer if you know what you’re looking for.

The Sign and Symbol of Half Time on South Road. Photo by Bob Tognetti

Also if you’re big into food flavored beer they have those too. Everything from banana bread, pineapple, which my friend just loves, and chocolate beer, which I don’t trust at all, is available for your purchase and consumption.

The fun does not stop there.  Once inside you’ll notice many of bottled six packs or missing a couple of beers in them, but why? Instead of spending money on just a six-pack of the same beer, Half Time allows you to create your own six-pack of beer, so if you feel like having a variety pack of beer from all different breweries you can do so.

If you just want a Pabst Blue Ribbon that’s fine too. According to the owner Alan Daniels, the theme of Half Time is to obtain as much of a variety of beer as possible. On the website, they claim to have every beer “From Abt 12 to Zywiec. But do people buy Pabst, despite seeing such a vast amount of micro brews and foreign beer? In the store, I asked one of the employees if people come there for Pabst and indeed they do get people to buy it.  Although he isn’t exactly sure they’re getting a good deal, as their beer prices tend to be on the more expensive side.

So how much will this set you back? Well it’s easy to buy a pack of six beers (12 ounce bottles) costing over 20 dollars, especially if it’s all foreign beers. One 12 oz. bottle I purchased called Delirium from Belgium cost me about $6, so be prepared to spend money if you decide to go. But if you have the 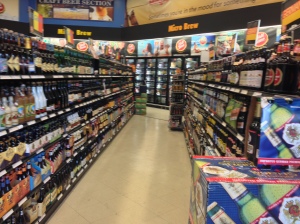 One of many Aisles in Half Time. Photo by Bob Tognetti

money, you can easily spend lots. Once I saw seeing one large bottle of Chimay ale, a Belgian beer originally made in a monastery, costing about $110 each.  So remember to prepared to spend money if you decide to go.  But if you are ready to spend the money, you’ll likely be able to drink beers you never dreamed would taste so good.

Still want more beer at checkout? Well the employees will offer it to you.  At checkout they’ll offer you be on tap to go. Or why not a stay awhile? They have 12 beers on tap too. In addition all the staff I’ve encountered are very friendly, I wouldn’t mind having a drink with any them.

What if you’re study abroad or don’t live close to either of their two locations?  Well you’re in luck they do allow shipping of beer depending on the state.  If you need help choosing what beer you desire, the website offers customers a fascinating way to choose their beer of choice.  It’ll ask which country you where u want you’re beer from, the hops content, the color or the alcohol percentage u want.  Plus, if you like the beer you drink then you can look up similar styles of beer too.   It’ll even recommend which foods go best with your beverage.  Just remember it’ll cost big, about $26 to ship a 12 pack, so make it count.

So you drink beer? You are 21? Then what are you waiting for? If you start drinking one beer every day, it’ll probably take about six years before you have tasted every beer in the Poughkeepsie Half Time. Probably an extra four years if you go to the new Half Time in Mamaroneck, which boasts about 3,000 different beers.