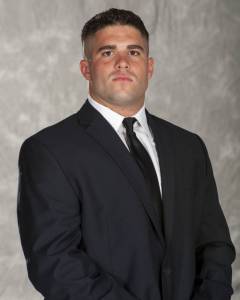 If there is anything history has shown us it’s that everybody loves an underdog story. There is nothing better than someone achieving the unthinkable and reaching their goal when the odds are against them. No matter what sport it is, walking-on to a Division 1 College sports team isn’t easy. Although none are easy, perhaps there is none more challenging then Division I college football.

It’s 6 a.m, he rolls out of bed, he looks outside his window, three feet of snow greets him as he opens his front door. “Damn! How am I going to get to my first practice?” He looks up with a stern face as if reliving the moment. “It was at that point I knew Alfred University wasn’t for me”.

Senior walk-on Nick Pititto is all too familiar with adversity knocking on his door. The North Merrick, NY native chose to start his collegiate career at Alfred University after numerous offers from other Division III schools. “I chose Alfred because, in all honesty, my grades weren’t the best and it gave me an opportunity to play college football and get a good education.” Nick was recruited to play outside linebacker for the Saxons and was optimistic about his immediate impact on the team. Alfred University is a rare school that has no limit in terms of recruiting players. “We had 100 kids in our freshman recruiting class,” he says with a chuckle. “There was a total of 300 football players on the roster and there was a lot of competition.” This made it tougher for Nick to make an immediate impact, so he decided to get more playing experience by starting the whole year for the Junior Varsity team. 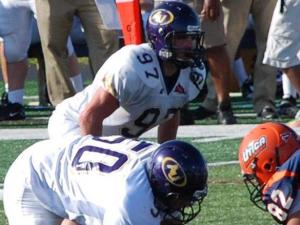 Nick Pititto at Alfred University back in 2011

“From the moment I met Nick I knew that he was a good ball player,” says former Alfred teammate Nick Manfredi. “Although we had a lot of fun at Alfred, we both knew that it just wasn’t the place for us.”

After his freshman season, Nick decided to begin the process of transferring. He was able to improve his grades from a 2.5 GPA and rose to a 3.5 GPA by the end of his second semester. Nick then made a decision that he will always remember; his application to Marist College. “At first I didn’t expect to get in,” he explains. “I thought I was going to end up at the University of South Florida”. By the Fall semester of his sophomore year he was enrolled at Marist. Nick was now met with the decision on whether he should walk-on to a Division I football team or simply hang-up his cleats.

After exchanging emails with the Head Coach Jim Parady and Defensive Coordinator Scott Rumsey, his decision was made and he was on the field for Spring ball. Nick walked on at outside linebacker and made the team because of his athleticism and potential to play special teams. After summer football camp his junior year, Nick earned a spot as backup middle linebacker; but he was put on scout team the rest of the year because he missed one meeting, Nick knew as a walk-on that this was a detrimental mistake. When he came into camp for his Senior year the coaches asked for him to play defensive end due to the lack of depth at that position. Nick was determined to make an impact immediately at this position. “His hard work and determination really set him apart,” says Student Assistant Coach Joe Candarelli. “He has a high motor throughout the whole practice; while everyone else is tired, he doesn’t let up”.

Nick finally got his chance to play in his first collegiate game and he didn’t disappoint. Nick started on the kickoff team against opponent San Diego on September 27th and on the very first kickoff of the game Nick flew down the field broke through blockers and made the tackle. “It was a great moment for him,” says Rocco Pititto about his son. “To see him make that tackle after his years of hard work, it’s a proud moment for me”. When Nick got a chance to play in his second game at Valparaiso, IN he delivered with two tackles.

Now as the Red Foxes reach the crucial part of their schedule where if they don’t win the rest of their games, a conference championship may be out of reach; Nick will be rotating in a defensive line and playing special teams. He is expecting to raise his level of play for the remainder of the year. A true underdog story may end in the most bittersweet way.