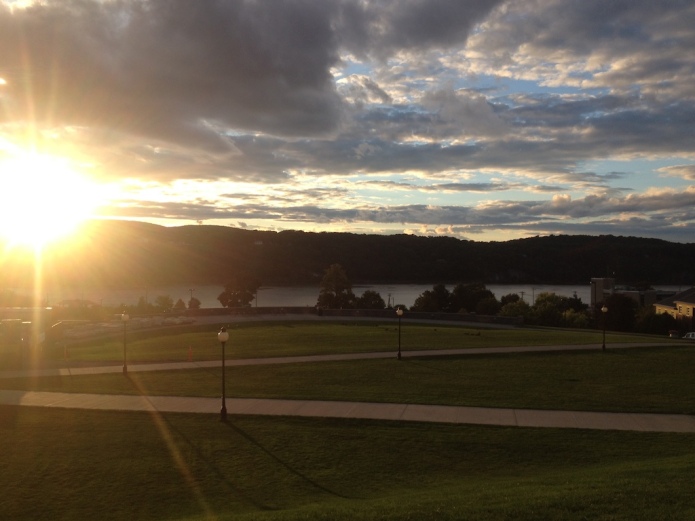 Students are back at school, leaf-peepers will soon be out in full force as the Hudson Valley trees turn into a blazing inferno of color, pumpkin-flavored everything is starting to appear in stores and colder nights are only supposed to just start to become the norm.

But the summer of 2014 seemed to segue into fall much sooner than anticipated; the only real “summer” temperatures felt in the Hudson Valley and surrounding regions were during the past few weeks when the mercury finally crept past 90 degrees.

The unusual 2014 cold spell has affected not only everyday summer activities but has also affected local farmers, sleep away camps, Delaware River rafting companies and even local restaurants.

“The cool summer does affect some of the crops like tomatoes which need the warm nights, especially,” Sue Gorzynski of Cochecton Center explained. She and her husband John own and operate a farm in the small Sullivan County town, “The temperatures do affect the crops in different ways. For example, it does take some crops longer to mature, but root crops like parsnips, carrots and beets will be made sweeter by frost. So you keep them in the ground so they can benefit from the cold temps. The end of the season looks good, we plan our planting around the season knowing we can have a frost as early as August and as late as June.”

Weather deterred many away from normally lucrative rafting trips down the Delaware River for many rafting businesses. Elizabeth Nicholson of Barryville, NY worked for Kittatinny Canoes this summer.

“For groups there’s been a huge shift in the type of trip they’re looking for.” Nicholson said, “Last year there was an equal distribution between the lower, shorter, rapid-filled sections and the northern more scenic stretches. This year there’s been more of a demand for the shorter rougher trips.”

Day visitors and vacationers haven’t been the only ones whose fun-filled summer trip has been spoiled by the cold weather.

April White, an Emergency Medical Technician for Frost Valley YMCA camp this past summer, said the cold led to a chronic “Camp-itis” condition among the attendees.

“The cold was a tremendous impact, keep in mind that these kids ages 8-15 are sleeping in ‘yurts’ which are glorified tents on a wooden platform,” White explained, “There’s no heat and kids aren’t allowed to drink tea or coffee to warm them up. Congestion, runny noses and sore throats were a big thing.”

White explained that campers’ activities including those by the “waterfront,” outdoor camping and otherwise normal camp activities were often rescheduled due to the sudden correlation with the camp’s frosty name and the summer’s below average temperatures.

“The counselors were very accommodating to the changes in weather and rainy day games were typically implemented,” White said, “But according to my colleagues enrollment didn’t drop late in the summer as it usually does. Normally they have to offer discounts and perks for parents to send their kids to the later sessions in August than the earlier ones in July.

Even local businesses were affected by the cold snap. Zach O’Connell of Highland, NY works at the Texas Roadhouse in Kingston part-time and watched how the changing weather affected business.

“With the weather being nicer and cooler during the summer not a lot of people would come out when they could stay home,” O’Connell explained, “Meanwhile when it rained or it got very hot the restaurant would be swamped. Now that it’s getting colder we have more customers coming in.”

The National Weather Service reports that Poughkeepsie’s average temperature high this year was 81.9 degrees that is just a half a degree lower than last year’s average high. Also surprising the lowest temperature this year (48 degrees) was actually warmer than last year (44 degrees in early June) but coincided with what is normally considered the dog days of summer in late August.

While some found this past summer to be temperate and enjoyable, others found the weather to be unbearable. And after last year’s brutal winter, it leaves many wondering if this upcoming winter will be even worse.