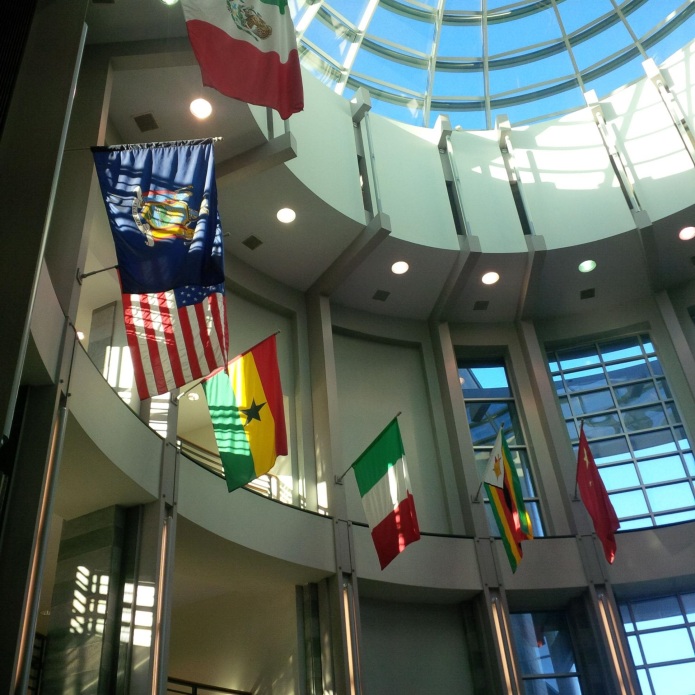 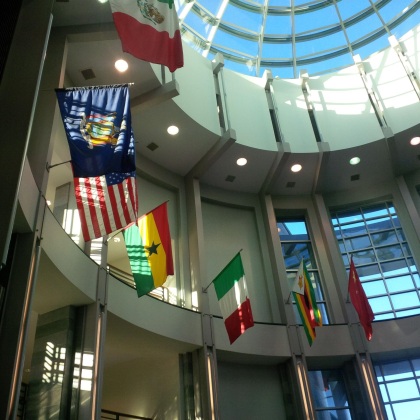 In the Rotunda of Marist College are national flags, which represent each of the school’s Study Abroad programs.

Thanksgiving is traditionally a holiday celebrated only in the United States and Canada.

But what about the Marist students who choose to Study Abroad for the fall semester? Do they miss Thanksgiving altogether?

Not necessarily, but it all depends on what they choose to do for it.

Every semester, many students at Marist College chose to study abroad; they pick a different country to attend school for half a year. Some pick places as far from Marist as Australia, while others pick ones just a little closer, such as England, Germany, or Italy.

But because Thanksgiving isn’t generally celebrated over in that part of the world, things are done a little differently on the fourth Thursday of November. I spoke with Marist’s Office of International Programs, found in the Hancock building about any type of programs they give to students who will be studying abroad in the fall.

“I don’t know of a program that we give out to students for Thanksgiving. It varies from country to country,” said one secretary of MIP.

Sometimes it works out for certain students who want to celebrate a holiday they’ve experienced for 20 years, while others don’t really mind missing one year of the tradition. I spoke with Elizaeth Grisafi, a junior at Marist College, about her Thanksgiving experience as a freshman, when she studied in Florence, Italy.

“Well, for Thanksgiving, I went to Switzerland,” she said. “One of my roommates in the Freshman Florence Experience group, who was also American, had parents who worked in Basel, Switzerland. A bunch of us in the FFE program were invited by her parents to come celebrate an American version of Thanksgiving in a different country. The town of Basel is right on the border of Germany, so Thanksgiving morning, my friend and I went to Germany to shop for food. It was pretty cool, ad we had a lot of fun that day.”

However, Grisafi was just one of the few people who were able to celebrate a traditional Thanksgiving dinner while studying abroad. She also told me,

“All of the other Florence kids went to a restaurant near Marist’s office for Thanksgiving. The school worked out a deal with the restaurant where you could pay 10 euros (close to 10 american dollars) for an Italian version of thanksgiving. They served chicken and potatoes, along with an Italian sausage stuffing. It was as American of a thanksgiving as you could have abroad.”

It’s pretty interesting two different accounts of Thanksgiving in another country. I didn’t have the opportunity to study abroad, so I don’t know what it’s like, but with help from Elizabeth, I got a good idea of what it was like.

I also got a chance to speak with students who are currently studied abroad who have been thinking about ways to celebrate the tradition in the coming weeks.

Kevin Pietrow, a junior at Marist, is currently living in Germany. He told me, “My host family is going to do a relatively special dinner, and i’m going to meet up with other students over here to celebrate.”

Pietrow’s girlfriend, who is also studying abroad, but is in London, England. He told me his girlfriend, Caroline, will team up with her housemates to figure something out. “She and her housemates are going to make as massive of a thanksgiving dinner as possible,” he said.

I talked with another student who is also studying abroad, but in Spain. Caitlyn Murphy, a junior at Marist College, told me that her upcoming Thanksgiving experience won’t be too different from our version.

Just because you are at school in a different country, you shouldn’t feel like you have to forget your American roots and traditions. Giving the traditional Thanksgiving an international twist is something all of these students have or will be doing next week.

What would you do if you were studying abroad during the fall semester? Would you stick to what you know, and cook a regular American style Thanksgiving dinner with your friends? Or would you branch out and try something different?

Personally, if I was abroad, I would definitely want to celebrate Thanksgiving, but I would want to put a different, unconventional spin to it. I would want to see if the country I’m in has their own version of the holiday, and if they don’t, I would try to make my own, with the help of the local cuisine.