It would be an understatement to say that lesbian, gay, bisexual and transgender issues are some of the most pressing of this generation. Marist College is an interesting place to begin examining LGBT issues. Unlike neighboring schools Vassar College and SUNY New Paltz, Marist is not known as a haven for those who identify as LGBT. This does not mean it is an unsafe campus; several professors and students have gone through the campus ally training, to identify themselves as a safe outlet to discuss LGBT issues and issues in their personal life regarding sexuality. However, students and professors have mixed reactions regarding the LGBT experience at Marist. As sophomore Mackenzie Rothschild puts it, “It’s a mix of views ranging from full on homophobia to gay rights activism.” 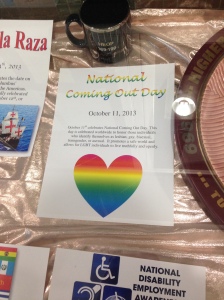 Stephanie Parenti, a sophomore and president of the Marist Lesbian Gay Straight Alliance (LGSA) said that attendance in the club has doubled since last semester. Their Coming Out Party, a celebration of National Coming Out Week, had an impressive turnout. Students were not hesitant to share their stories of coming out as LGBT while straight students listened attentively. Parenti remarked that LGSA has gained a stronger presence in the school community with membership doubling since last year. To her, the remnants of Catholicism at Marist are not detrimental to the LGBT community. She also pointed out that there was a large Marist presence defending the LGBT community at Vassar when the widely known hate group Westboro Baptist Church came to their campus. Kaitlyn Clow, a freshman member of LGSA, also asserted that Marist is a safe campus and that the college is more accepting of non-straight sexualities than her high school. Brian Main, secretary of LGSA, pointed out that the popular Facebook page Marist Confessions frequently has students standing up to those who post homophobic confessions, and are supportive towards those who confess that they are questioning their sexuality. Despite this, all of these students seemed to agree that the LGBT community at Marist outside of LGSA meetings and events tends to remain underground.

As most Marist students know, the college was founded by the Marist Brothers, a French Catholic society, as a place for them to train young men. The college first admitted women in 1968, and became nondenominational in 1969. According to political science professor JoAnne Myers, who recently published “Historical Dictionary of the Lesbian and Gay Liberation Movements,” the first men who attended Marist were more fluid and open with their sexuality. However when she started working here in 1986, “things were very much underground.” She recalls that LGSA had trouble gaining funding when it started in 1991 because many members were afraid of coming out. She asserts that there are students on campus who identify as LGBT but do not attend meetings because of safety issues, and because there is still a prevalent Catholic mindset on campus. Despite Campus Ministry reaching out to LGSA and the growth of an LGBT presence in past years, Myers said that Marist is “still very much a community that is conservative.” Her students often point out that they are against gay marriage because of their religious background. As a gay woman, Myers chose to teach here because she sees herself as a “change agent.” “It’s one thing to preach to the choir, it’s another thing to change through persuasion using facts.”

Jerry White, a history professor who has worked at Marist for 51 years, has a slightly different take. Since his Greek history classes deal with same-sex relationships in a historical context rather than a modern political one, he says his students have little reaction to it. Before the ally program was in place, White “made it his business to help out the gay kids,” dealing with their housing issues and giving them an outlet to openly discuss their problems. He pointed out that LGBT discrimination has become less of a problem as the campus diversifies, but recognizes the Catholic tradition that is still present and that some students find it difficult to come out because of family problems. He says that in general, people at Marist “don’t give a damn whether you’re gay or straight.”

So what’s there to make of all this? While this current generation may be the most accepting of LGBT people and willing to make the world a more inclusive place, there is still work to be done. Perhaps Marist College is one entity that echoes the attitudes of the United States as a whole.

Click here to learn more about LGBT resources at Marist.